“Can’t Just Fold Your Arms”: A documentary on Sonke’s work to mobilise men for gender justice

By William Nessen
Can’t Just Fold Your Arms is an inspiring story of moral commitment, a striking portrait of the country today, and a necessary warts-and-all look at the reality of ‘engaging’ men for women’s rights and gender transformation. 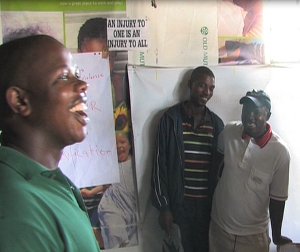 The film follows three high-profile Sonke activists, Mbuyiselo Botha, Patrick Godana and Dean Peacock, and a small team of Sonke’s younger men, as they train, discuss, debate, listen, lecture, laugh, march, sing, inspire, explain, worry, plan, pray, toyi-toyi, criticize, coax, question, organise, and wrestle with South African reality and with one another over a period of two years. At every step of the way, the everyday work of ‘engaging men’ stirs up bigger issues of strategy, vision and politics.

A movement of men for equality

Across the world, men are joining women in trying to end domestic and sexual violence, promote more flexible gender roles and challenge patriarchy. Like Sonke in South Africa, organisations of men and women in dozens of countries, rich and poor, have developed and implemented programmes and strategies to mobilise men and boys to confront gender injustice with the long-term goal of developing healthy relationships that contribute to just and democratic societies. With men and boys as the focus of their efforts, this new movement is an untold story of human rights activism in the 21st century and, part of a broader human rights and social change agenda for the coming decades. With the world’s highest levels of HIV, of intimate partner violence, and of rape (in a study of one province 27 percent of men admitted to having committed rape), South Africa is a gender war zone. Despite decades of liberation struggle and a legacy that includes one of the world’s most progressive constitutions and the prominence of women at every level of government, women remain a battered underclass in post-Apartheid South Africa. But as one speaker at an international symposium organised by Sonke said, “You can’t put a quarter of men in jail.” There must be another approach. Can’t Just Fold Your Arms situates Sonke’s origins and its approach in these complex realities.

Using the language of the anti-Apartheid struggle, the country’s own constitution and the health and human rights discourse popularized by the global AIDS advocacy movement, Sonke carefully navigates its way forward: taking money from and working with government while also confronting it; mobilising men to publicly support women’s rights and challenging them to change their mindset and behaviour in their daily lives.

Shot in the head during an anti-Apartheid protest in 1986, Mbuyiselo Botha remains paralyzed on his left side. Irreverent, energetic and predictably unpredictable, Botha uses his disability to ‘engage’ – charm and disarm – the young men he speaks to. He is Sonke’s premier showman. To captivated audiences, he jokes about sex, his disability, or his sticky underpants. Praising his mother’s solo parenting, he says he is doing this work largely for personal reasons – to create a better world for his recently married son and his two teenage daughters. He wants young men to reflect deeply and empathize with the plight of women. Botha led Sonke’s headline-making ‘David vs. Goliath’ fight to bring the sharp-tongued ANC Youth League president, Julius Malema, to South Africa’s Equality Court for hate speech against women. The successful case against Malema provides one of two principal story arcs to the film. The film’s title comes from Botha. After the success of the anti-Apartheid freedom struggle, he tells an audience, you had to be concerned with the lack of women’s freedom, especially in the country’s poor, violent townships: “You couldn’t just fold your arms and do nothing.”

On a trip to the country’s northwest to train young rural activists – part of Sonke’s role as resource and catalyst for local community groups – Botha served as mentor to a younger Sonke staffer, Thami Nkosi, who led the weeklong workshop with Botha. Relentless, Botha rarely puts aside his gender activist hat, even correcting well-intentioned guests at the B&B’s breakfast table. In the film, Nkosi, whose father died of AIDS and who sports a T-shirt silk-screened with an image of murdered Black Consciousness leader Steve Biko, suggests how important “the untold weight of the dead on the living” is in South Africa today.

Godana, a veteran of the African National Congress’s armed wing, Umkhonto we Sizwe, and tortured during five years in prison, is also deeply shaped by his past. Godana’s nightmares still wake him in a cold sweat. Like many black boys under Apartheid, desperate poverty, ruthless racial policies and an abusive father taught Godana that a man has to take risks and be tough. But working to change other men’s mindset and behaviour has helped change and heal him. If he teaches his Sonke team only one thing, he says, let it be discipline.

Like Godana, these three members of his team, are deeply concerned about their country. As they distribute condoms in the poorest parts of the township, they tell with bittersweet laughter tales of local ANC corruption. In the taverns that are the townships social centres, the team gets men, young and old, to speak about and question dominant notions of manhood, that contribute to violence and the spread of HIV. Sonke’s principal constituency, though, is not the men who rape, abuse and contaminate partners. It’s the far larger number of silent men whom Sonke wants to stir to awareness and action.

The no-nonsense Godana critiques the team’s efforts. They work with little rest – training men, organising public events, going over plans and writing reports. But Patrick also worries about these young men’s future; Sonke staff (as in many NGOs) are largely dependent on short-term projects for their employment, especially true in the organisation’s early years. There are still recurring gaps in funding cycles where the younger men have no definite contract and so are without the steady employment and remuneration that allows them to plan their lives with some assurance. Sonke has sadly lost staff in this way. Godana fights for his team inside Sonke and puts in long, hard hours to ensure they are able to keep their jobs.

When a new political party, COPE, emerged from the ANC to challenge its formidable parent, Godana, Botha and other senior black staff remain steadfastly ANC supporters. ANC’s leaders are “our leaders,” Godana says. But he says it at a protest criticizing ANC silence and inaction about Malema’s controversial statements.

Sonke’s co-founder and director, Dean Peacock, is the third principal protagonist of the film. Respected worldwide for his organisational skill and pioneering work with men – he’s won South Africa Best Man Award and serves (with ex-presidents and Nobel Laureates) on UN Secretary General’s 20-person global Network of Men Leaders. The End Conscription Campaign poster in Peacock’s office indicates his long-term activism that started in the mid-1980s under Apartheid. Peacock tells us, during a discussion with Godana about ANC corruption, that he had also gone to work in Sandinista Nicaragua, attracted by their political project but then became disappointed by their betrayal of revolutionary values and commitments.

Peacock is often the pivot of Sonke meetings. He asks provocative questions, and synthesizes long discussions among staff. But Peacock sometimes finds himself at odds with senior staff about ANC government officials. He doesn’t hesitate to criticize ministers for their harmful policies and statements; he confronted Parliament’s deputy speaker, whom Sonke has invited to speak at a rally, when she absolves government of responsibility in defending refugees facing xenophobic attack. In a website blog, Peacock also lambasted a former Minister of Health who as a senior advisor to the country’s president continues to propose vitamins and traditional remedies against HIV infection. Godana and other senior management suggested less frontal, individualized attacks.

Despite Sonke’s rapid growth since its founding in 2006, and its increasingly successful fundraising, the organisation’s primary function is still reaching men in community training, capacity building and mobilisation projects. Peacock, however, wants to do more.

With Botha, Peacock urges increased advocacy and policy work, including protest. (Of course, everyone in the organisation delighted in the national headlines garnered in the Malema case.) “Maybe I’m being too simplistic”, Peacock says, “but I am determined to find the right target [for advocacy and policy efforts], and the right tactics to focus Sonke’s work.” It appeals to his exacting style.

The world-renowned Treatment Action Campaign (TAC), which used dramatic protests to press the South African government to change its disastrous HIV and AIDS treatment access policies starting in 1998, serves as Peacock’s local inspiration. Several ex-TAC members are on staff, including Peacock, and the group is the real life lodestar for many post-Apartheid activists.

Peacock, Godana, Botha and others also hope to widen Sonke’s impact by going beyond its one-off workshops and multi-session trainings of peer counsellors and community action teams. Establishing sustained community activism through Sonke branches or chapters, as TAC and the ANC before them did, is a strategy that the organisation continues to explore. But when a male member of a newly established branch was charged with raping a female colleague, Sonke struggled to find the way forward. This is the other principal story arc of the film.

Community Education & Mobilisation, One Man Can