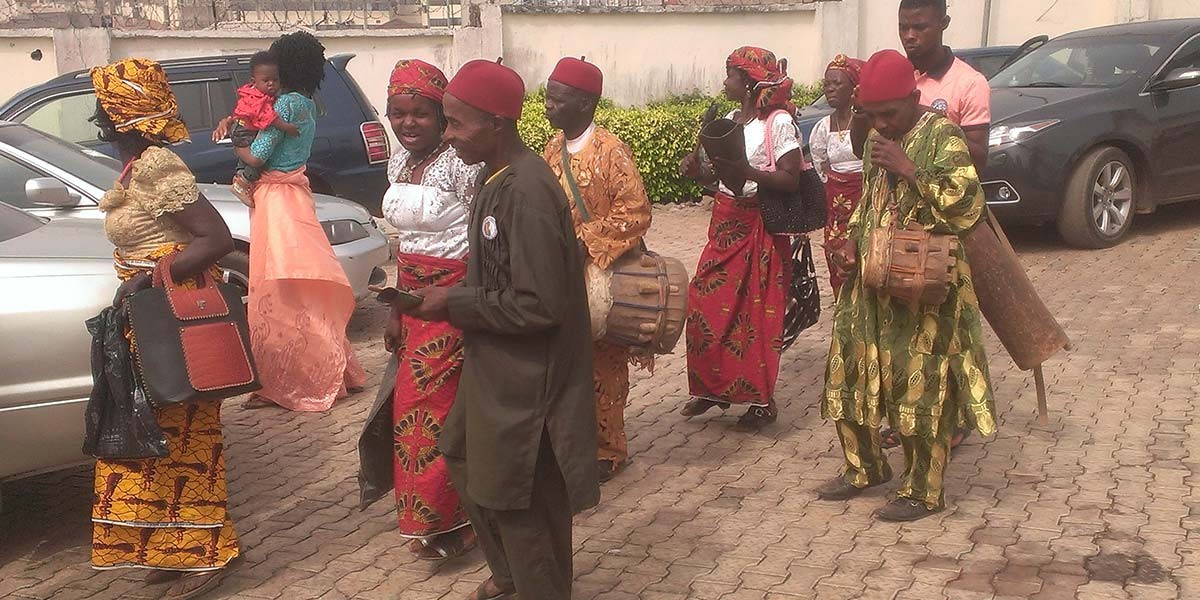 An alternative to FGM at naming ceremonies in Igbo land

In Igbo land, FGM is usually carried out to coincide with the child’s naming ceremony, which is a festive event with gifts and refreshments. In Igbo culture, the naming ceremony comes up almost immediately after the birth of the child. It is normally done on the 7th to the 12th day after the birth of the child. When a child is born in Igbo land, he or she is welcomed into the world with joyous songs. In our culture, as soon as the news of a safe delivery of a baby is broken, the women around will assemble and start singing joyous songs. These women will then go into the house and rub “Nzu” (a white powder) on their necks as a mark of purity of heart, goodwill and welcome for the new child. After this, the family will then start making arrangements for the child’s naming ceremony, which is a very big event in Igbo land.

In Igbo culture, the naming ceremony of a child is often referred to as “ikuputanwa or igu nwa’ aha” and this marks the formal presentation of the child to his people, which comprises of his kinsmen, family, friends, well-wishers and the entire community at large. This event is normally done to fulfil the social-religious obligations, that are believed to become activated when a child is born, as well as to thank God for the safe delivery of the child and to ask him to guide the child, as he embarks on a journey through the earth. In traditional Igbo life, there is a lot in a name. The name is more than just a tag; it’s more of an identity. An Igbo name always bears a message, a meaning i.e. like my own name Somtochukwu which simply means (follow me and praise God).

Now coming to the naming ceremony proper, in Igbo land, the paternal grand-parents officiate Igbo naming ceremonies. The child is brought out by the paternal grandmother, who hands him/her to the child’s father. The ceremony then begins with the usual breaking of kola-nuts and prayer, which involves the pouring of wine libation to the gods. After this, the child is then given a name by the father. In some communities in Igbo land, a tree is also planted to represent the life and survival of the child. The ceremony is then ended with the presentation of gifts to the child.

It is under the scenario, that the girl child is also mutilated. In Igbo land, the naming and cuttings are intertwined. Society for the Improvement of Rural People (SIRP) has found out that poor mothers could not openly resist their girls undergoing FGM because it would also mean there would be no naming celebration.

It is because of this situation, that SIRP introduced the sponsorship of naming ceremonies for children, whose parents showed a commitment not to cut their infant daughters. These parents then went on to become SIRP’s FGM Abolition Champions and Peer Educators in their communities, working hard and often facing social persecution.

FGM, Society for the Improvement of Rural People