On September 3 and 4, Sonke attended the hearing of the Chief Justice nominee, Mogoeng Mogoeng, before the JSC. We danced, we tweeted, we got angry, we got on TV making shocked faces, and we spent at least ten hours of our lives with South Africa’s new Chief Justice.

A bit of a surprise 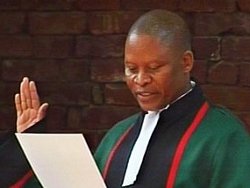 When President Zuma announced his nomination of Justice Mogoeng for Chief Justice, the media and civil society expressed a concerned surprise that a relative newcomer to the Constitutional Court was preferred over a number of more experienced, well-known and trusted candidates, including the highly respected Dikgang Moseneke, Deputy Chief Justice of South Africa’s Constitutional Court.

Moseneke once said about his job as deputy chief justice that he wants to use his energy to help create an equal society. “It’s not what the ANC wants or what the delegates want; it is about what is good for our people.” The ANC subsequently issued a complaint saying that Moseneke’s comments showed disdain for the party.

It seemed pretty obvious that Zuma didn’t want an independently minded leader. He picked Mogoeng Mogoeng, the least senior and, as some have said, the most conservative judge on the constitutional court. With some big events looming on Zuma’s and the ANC’s horizon, someone who has a flair for being obedient and not particularly individualistic might be just what the doctor ordered.

To discover more about Mogoeng’s low-key career, scholars, activists and writers began to dig. What was found sent shock waves through communities of gender activists and a wide range of progressive-and transformation-minded people. Mogoeng Mogoeng, someone new to the ConCourt scene, began to look like a judge with homophobic tendencies, a backward perspective of women’s rights and a sense of blind patriarchy and conservatism.

In a case where a student had pasted the faces of two of his male teachers onto a pair of men in a (homosexual) sexually suggestive image, Mogoeng dissented from the majority ruling that it cannot be defamatory to depict anyone as a member of a group protected by the constitution. The problem is that he did not say why.

Curiously, Mogoeng is a lay pastor at a church that believes homosexuality is a deviation that can and should be cured. Did this unconstitutional belief prevent him from acting lawfully? If not, what did?

But what about freedom of religion?

Winners’ Chapel International is not unlike many Christian churches in its highly unfavourable view of homosexuality. And perhaps it is not unlike many in its view of gender roles either. This is neither here nor there. What is very much here, is how Justice Mogoeng internalizes these beliefs and how they feed into his judgments.

If our new Chief Justice had no blemish on his history of cases relating to homosexuality, gender-based violence and rape or other value-based issues, then we would have no reason to scrutinize his personal beliefs.

Pastor Faith Oyedepo, wife of the international church’s founder, David Oyedepo, writes in her Christain Family [sic] series on the church’s website, among many other comments in the same vein, “Wife your husband is the head of the home. You must be submissive to him… Allow him to take the final decision as regards the progress of the home. I want you to know that any woman who is strong-willed and unyielding is heading for disgrace and destruction.”

Particularly worrying. What if a woman is strong-willed and unyielding in not wanting to have sex with her partner? Is he then justified in committing violence towards her, disgracing and wreaking destruction upon her?

In 2002, a man was found guilty of tying his girlfriend to a bakkie with wire and dragging her at “fairly high speed over a distance of about 50 metres,” with the objective “to drag the complainant and cause her grievous bodily harm.”

One of the mitigating factors cited by Mogoeng when he reduced the man’s sentence by half, was that the complainant “provoked” the accused. Perhaps she was being strong-willed and unyielding.

Justice Mogoeng presided over a case of marital rape in which the husband was convicted and sentenced the minimum sentence of ten years. However, Mogoeng identified some ‘mitigating factors’:

In another case, Mogoeng reduced the sentence of an attempted rapist who throttled his estranged wife while trying to rape her. Mogoeng said, “The appellant must, [because his wife was dressed in a nightie], have been sexually aroused when his wife entered the blankets. The desire to make love to his wife must have overwhelmed him, hence his somewhat violent behaviour. He, however, neither smacked, punched nor kicked her. Minimum force, so to speak, was resorted to in order to subdue the complainant’s resistance.”

And, “This case is not comparable to a case where a lady comes across a stranger on the street who suddenly attempts to rape her.”

What do we take from these rulings? A) Being raped by one’s intimate partner is not as bad as by a stranger. B) When intimate partners sleep in the same bed, it is expected that they have sex, (“likely to happen or… going to happen for sure.”) C) Being aroused by one’s partner makes ‘minimum force’ okay. In fact, we even get a whiff of it being commendable to use minimum force rather than greater force, while there is no suggestion of it being unacceptable to use any force compared to no force.

The big problem is that these opinions really do reflect the gender roles prescribed by Mogoeng’s church (that it is more important for women to comply with their husband’s wishes than to stand up for what they want, need, and feel comfortable with) far more than they reflect the constitution’s provisions.

Worryingly, Mogoeng Mogoeng actually publicly stated that he upholds the constitution not for his personal commitment to it, but because the Bible says that he should. At the JSC hearing, he cited Romans 13:1-7 to this end, which includes, “The authorities that exist have been established by God. Consequently, he who rebels against the authority is rebelling against what God has instituted…” This he cited to prove that he would protect the rights of women and the LGBTI community laid out in the constitution.

If the law said to mete out the death penalty for homosexuality instead, would Mogoeng follow it because God says ‘obey the law’? Perhaps, considering a past case… Under Apartheid, he actively pushed for the death penalty for a man appealing against his conviction, on the grounds that his lawyers did not represent him fairly. Mogoeng cited orders from his boss and that “[the death penalty] was the law,” as his reasons for doing so. Not from any kind of commitment to human rights, or any standards he has set for himself, but because the law and his boss said so.

If our Chief Justice’s conscience doesn’t line up with the constitution, do we have a problem?

Rules are OK, but what about the grey?

Mogoeng Mogoeng likes rules. He is not a trailblazer, not by any standards. His most-trumped achievements at the JSC hearing were two conferences he organised.

He acknowledges but does not take seriously the fact that his colleagues on the constitutional court lack respect for him, and he puts this down to their being jealous of him. His strategy proposed at the JSC hearing to lead them and gain their respect? “They’ll come around when they realize what’s best for the country.”

He failed to recuse himself as Judge President when his wife appeared as state prosecutor, because his seniors said it was okay. (It ended up not being okay – the case was rescheduled to be heard before a different bench.) This is despite the fact that he felt uncomfortable about it.

And what about the future?

With the constitutional court set to address the issues of the arms deal and the secrecy bill within the next few years, we have to gird up our loins to keep steady pressure on maintaining a strict separation of powers. It will not do to have our Chief Justice following the orders of anyone or anything besides the constitution, until his twelve years, or fewer, are done.

*SECTION27, with the support of Sonke, The Equality Project and TAC, compiled a submission to the Judicial Service Commission that addressed the fitness of Mogoeng Mogoeng for the office of Chief Justice. This article quotes from Mogoeng’s hearing before the JSC, and the SECTION27 submission, which you can find here.