The Traditional Courts Bill is a hotly contested piece of draft legislation that Sonke and its partners in the Alliance for Rural Democracy view as a threat to many of the values and principles enshrined in the South African Constitution – especially the constitutional commitment to gender equality. The CGE Monitor keeps track of the CGE’s performance and will hold it accountable when it fails to deliver on its mandate. Current legislation governing the conduct of traditional justice fora are outdated, drafted before and under Apartheid.  Sadly, many traditional justice structures exacerbate inequality for rural and already-marginalised people, instead of protecting them.

So, while the updating of these laws is a necessary and timely intervention, the Traditional Courts Bill, unconstitutionally drafted, with only the input of traditional leaders, is regressive, entrenching that inequality more by giving great power to traditional leaders with almost accountability mechanisms in place.  In addition, the Bill does not recognise the whole range of community structures for dispute resolution, even though they are integral to traditional justice systems in South Africa. Thus, under the Traditional Courts Bill, the chief or traditional leader would wield power of an unprecedented level in rural communities and the participatory community structures would not be recognised by the law.

Traditional Courts Bill is tabled in the National Assembly and rejected after outcry from civil society.

The bill brought back unchanged from its 2008 form.

Public hearings are held across the country. The Alliance for Rural Democracy sent delegates to many of these to ensure that the voices of ordinary people and not just traditional leaders or those wielding power were heard in the hearings.

Four provinces reject the Bill outright, namely the Eastern Cape, North West, Gauteng and Western Cape. However, instead of discussing the mandates as the Committee was scheduled to do, the Chair proposed that the process be postponed to allow for further public hearings. He mentioned that the Minister of Women, Children and People with Disabilities wanted to make a submission to the NCOP, as well as the ANC Women’s League. The Committee is mandated to call for and allow submissions to itself in Cape Town. However it is not mandated to do what happened next, which was that members called for the provincial public hearing process to be re-opened.

More public hearings are held, and in September, a series of hearings is held in parliament, in which over 22 submissions are made. These submissions overwhelmingly rejected the bill, with only a handful of submissions backing the Bill’s passage.

The NCOP meets to analyse input received in public hearings. However, the Department of Justice and Constitutional Development (DOJ), on the invitation of the Committee Chairperson, presented its summary of the public hearings. The DOJ document only referred to two of the many submissions that were made at the public hearings in September. They were the submissions of the Department of Women, Children and People with Disabilities, and the South African Human Rights Commission. The Chair made this instruction to the DOJ because the other submissions were, in his words, “irrelevant”. This faced a huge outcry from provinces and civil society, who had spent time and work on the submissions and public hearings.  It also totally undermined the submissions of the rural people at the hearings, who travelled from afar to give oral submissions, often on how traditional justice systems and their leaders had abused them and their communities, rallying emphatically against the provisions of the Bill.

The NCOP has yet to discuss the submissions made in the public hearings. It will then decide whether or not the Bill should be altered from its original state as introduced by the National Assembly. If yes, it returns to the National Assembly for approval. If no, it either is signed straight into legislation by the President or submitted to the constitutional court by the President to review and assess its constitutionality. It is dangerously close to becoming legislation, and with the recent turns of events, it seems as though there are powerful people who want the Bill passed, and who will override Parliamentary processes in attempts to push it through. 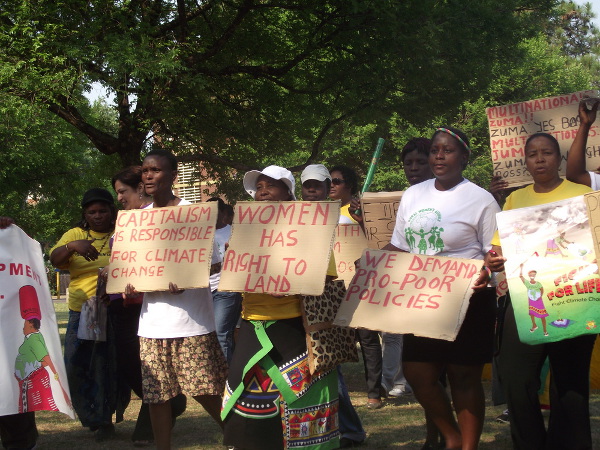