In South Africa, MenCare fills the gap between family and the workplace

Globally, there continues to be tension between the home and the workplace, and parents – especially those with young children – must grapple with difficult decisions when balancing employment and family. Particularly in South Africa, sociocultural norms play an important role in shaping family structures and attitudes towards fatherhood and male involvement. Fathers are often expected to be breadwinners and assertive leaders, rather than caregivers and nurturers.

An extremely prevalent belief is that fathers’ main role in parenthood is financial. This harmful mindset discounts the enormous benefits of fathers’ increased involvement in the household, through unpaid care work and even simply being present. Evidence shows that children of involved fathers often have higher cognitive abilities, increased self-esteem, greater socioeconomic advantages, and fewer behavioral issues, as compared to children without a father’s positive presence.

In addition to advocating for policy change, Sonke also implements “bottom-up” or community-based solutions. These initiatives – like the MenCare+ program implemented in partnership with Sea Harvest Company, a fishing company, in Saldanha Bay in the Western Cape – assist fathers in learning how to engage with their children and carry out unpaid care work at home. The purpose of the program is to promote nonviolent and involved fatherhood through positive parenting workshops. Many participants have greatly benefitted from this opportunity, taking home countless lessons and ideas to strengthen their relationships with their partners and children. 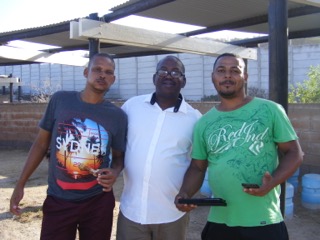 Ricardo, who is a Shop Steward for Sea Harvest Company, talked enthusiastically about the MenCare+ workshops and felt supported by the community of fellow working fathers they created. Ricardo has two children, a 16-year-old son from his first wife, and a 6-month-old son from his current marriage. He appreciated the environment of the workshops, saying, “I could relate more to people here because these people are really struggling. I … learned a lot of things from them.”

When fathers are able to talk to coworkers facing similar struggles, they can feel much more comfortable sharing their experiences and worries with each other. Creating this community through MenCare+ workshops may have even increased the level of family-friendliness of the Saldanha Bay Sea Harvest workplace as they helped so many employees to open up.

Ricardo also found ways to strengthen his relationships and communication with his sons. He realized how vital it is for his children to feel safe and comfortable having in-depth, personal discussions with him. He explained:

For Ricardo, the MenCare+ workshops provided him with an outlet and a learning experience. 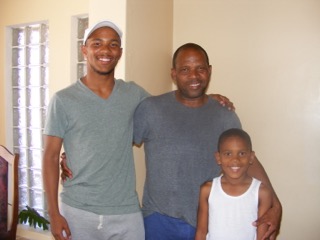 Dawie has three children and worked as a Production Manager at Sea Harvest. He similarly learned many new parenting skills and mindsets at the MenCare+ workshops in which he participated at Sea Harvest through Sonke Gender Justice. In particular, he learned how to separate and balance his work life and family life. At Sea Harvest, Dawie was a strict manager and always strove for discipline and stringent organization. He talked about how he frequently used these same techniques at home, since that was what he was used to. Through the MenCare+ program, he stated that he learned new ways of separating and balancing his life at home:

“I can’t bring my work home. I can’t talk to my family in the same way. I have to approach them in a more acceptable way, in a more respectable way.”

Dawie was indirectly pointing to some of the complications that come with stereotypes and social norms which dictate how fathers and men should act at home and at work. Men are expected to be aggressive leaders, and too often they are not exposed to positive discipline and positive parenting techniques. MenCare+ workshops can effectively teach men how to alter their mindsets at home to accommodate children’s needs and be firm but understanding fathers.

Dawie says he learned how to be an accepting and flexible father: “You [should] allow your child to become what he wants to be, and then to give guidance, and be there to support. To me, it is the small things. Teach your kid how to fasten his shoe laces, encourage them to go to school.”

Although it is difficult to balance differential expectations, assumptions, and stereotypes about men, as well as family life and work life, MenCare+ workshops and engaged, willing fathers are slowly improving the state of fatherhood in South Africa.