Around the world today, women will be celebrated. But celebration is not enough. Women must also be respected, and their rights protected. In South Africa, an estimated 1.5 million rapes occur every year, most unreported. On International Women’s Day, we don’t want lip-service about women and ending gender-based violence, we want investment and a clear commitment from government, with a national plan to back it up. 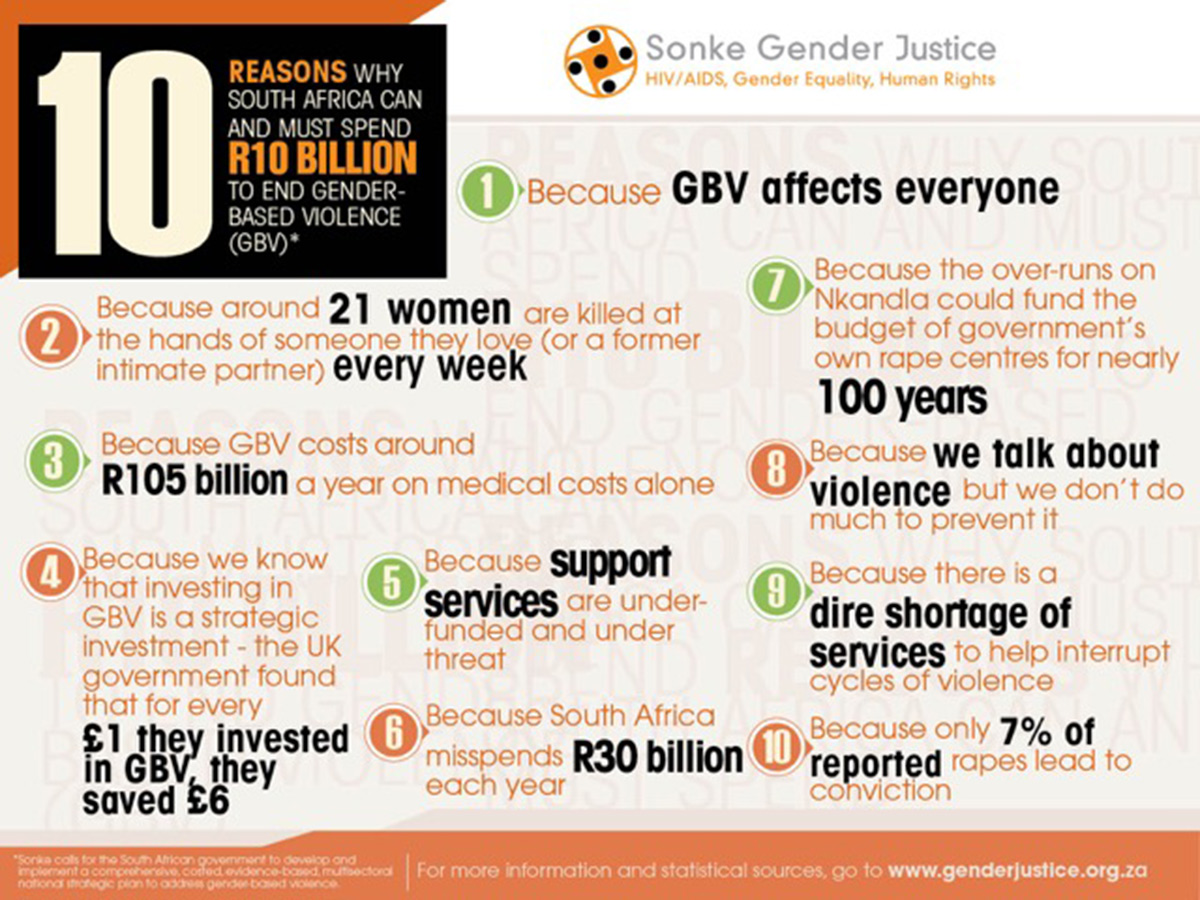 1. Because GBV affects everyone

The primary victims of GBV are women and girls across all cultures, but also people who do not conform to rigid definitions of masculinity and femininity. It also affects men and boys who witness the devastation it causes for women they care about. GBV affects rich and poor, it affects people with disabilities, and it affects children and adults. It’s a national problem that won’t go away without a serious well-funded effort sustained over years, not months.

2. Because around 21 women are killed at the hands of someone they love (or a former intimate partner) every week

More than 1,000 women a year are killed by their intimate partners in South Africa, one every 8 hours.

3. Because GBV costs around R105 billion a year on medical costs alone

A study carried out by the Health Economics and AIDS Research Division (HEARD) at the University of KwaZulu-Natal indicates that the cost for each incident of violence against a woman is R5,528.1 This is significantly more than the average monthly income for women in South Africa, and works out to a total medical cost of around R105 billion a year. Besides the medical expense, women lose income, and the economy suffers, when they are unable to work because of GBV.

4. Because we know that investing in GBV is a strategic investment – the UK government found that for every £1 they invested in GBV, they saved £6

Baroness Patricia Scotland, the British Prime Ministerial Trade Envoy to South Africa, says the United Kingdom was able to reduce gender-based violence by 64% by implementing a comprehensive multisectoral approach. She explains that prior to this effort, the British government had established that domestic violence had cost the UK £23 billion per year, but after developing a broad national plan to address GBV, they realised that for every £1 they invested, they saved ;£6.

5. Because support services are under-funded and under threat

A recent study by the Shukumisa Campaign showed that hundreds of jobs have been lost in recent years because of funding cuts to the organisations that help survivors of violence pick up the pieces. Shelters, counselling and trauma centres, and law clinics are closing down. Yet the corporate sector spends almost none of their CSR (corporate social responsibility) money on GBV.

In 2012, South Africa’s Auditor General reported that R30 billion had been regarded as “irregular, wasteful and fruitless expenditure”.2 These resources, if better managed, could be diverted to end GBV.

7. Because the over-runs on Nkandla could fund a rape crisis centre budget for 32 years

President Zuma’s renovations to his personal home in Nkandla will have cost around R226 million by the time it is finished.3 This number is 32 times more than what it cost to run the Rape Crisis Cape Town Trust in the 2011/2012 financial year.4 That means that the money spent on Nkandla alone could have funded a major rape crisis centre for more than three decades.

8. Because we talk about violence but we don’t do much to prevent it

Our society gets angry after the fact. Having better courts and police is crucial but it isn’t enough. Preventing violence – as Sonke Gender Justice does through its One Man Can, Brothers for Life and MenCare campaigns – means empowering women and girls, and teaching boys and men to respect their peers in school, in the community and at home.

9. Because there is a dire shortage of services to help interrupt cycles of violence

Children who witness violence are far more likely to grow up to be victims themselves, or to be perpetrators of violence. South African principals say that one psychologist serves as many as 50 schools, which means that up to 50,000 students have to share one psychologist. Providing psychosocial services in schools and communities to children who have been exposed to violence can break the intergenerational cycle of violence.

10. Because only 7% of reported rapes lead to conviction

Not only is rape one of the most under-reported crimes in South Africa, but only a few of the cases that actually do get reported lead to conviction. A recent study by the Medical Research Council (MRC) in Gauteng shows that only one in 13 women raped by a non-partner reported the matter to the police and only one in 25 of women raped by their partners reported this to the police.5

We can’t afford not to fund a national GBV plan that will do the following:

In the spirit of International Women’s Day, and responding to the critical need for gender-based violence to be effectively addressed and prevented in South Africa, we urge President Zuma and his Cabinet to provide leadership on this issue. The National Council Against Gender-Based Violence risks wasting an opportunity to act unless it develops a costed, evidence-based national strategic plan. The plan must have time frames for implementation and clearly laid-out responsibilities, as well as consequences for failure to deliver.