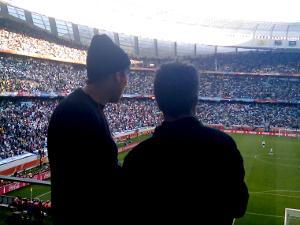 During the 64 matches played from 11 June to 11 July 2010, Grassroots Soccer (GRS) provided over 14,500 children and adults with an unforgettable experience of a lifetime – the opportunity to attend the 2010 FIFA World Cup matches.

Through a partnership with Sony, an official World Cup sponsor, GRS received 15,000 tickets, which were distributed to graduates of GRS’ Skillz Holiday programmes and 59 partner organisations across the country, including Sonke. The guiding principle of the Sony Ticket Fund was that tickets must be earned, rather than bought, and by demonstrating leadership in the fight against HIV, youth earned a place in the first World Cup played on African soil. In this vein, the donated tickets were used to take Primary School learners who participated in GRS workshops and activities, including the Skillz holiday camp, to watch live FIFA World Cup games.

The Skillz holiday camps were held during the extended winter holiday during the World Cup, and were run primarily by GRS staff with support from partner organisations. Sonke’s coaches provided particular input regarding gender issues during the trainings which were run in various cities and townships throughout South Africa. Overall, about 10,000 learners were reached over a period of four weeks with fun and exciting edutainment, using soccer analogies (including the Red Card approach) while learning about HIV and Aids.

“Working with school children is fascinating. It was great fun to have trained coaches compose gender sensitive songs that aim to promote gender equality within communities and their school environment!” said Donald Ambe, Sonke’s project co-ordinator for this partnership. “Taking the learners to the stadium was a great experience and motivation for them to see their stars and role models playing soccer.”

The coaches felt empowered as they took care of learners throughout the camps and at the stadiums amidst the crowd. Five of the coaches also got an opportunity to meet the FIFA president Sepp Blatter, to express their joy and excitement in receiving the tickets and taking the learners to watch the games.