“The wind is part and parcel of the city, so today Worcester welcomes you all.” The wind, always a sign of change, swept through the veld of the Breede valley, a reminder to keep shaking things up, to refuse stagnation – an attitude mirrored by the energy and commitment of the speakers and participants at the Breederiver World AIDS Day event.

The wind knocked down the gazebos erected by HIV and TB Care, who attended the event to conduct HIV Counselling and Testing (HCT) and TB screening. Unfazed, and energized by the huge turnout of over 300 people, they moved their tents inside, and the day’s activities began. 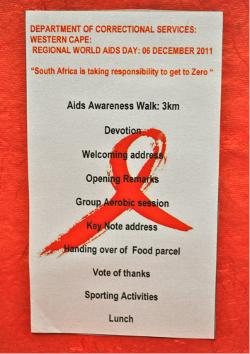 After the MC opened the proceedings and the Reverend blessed the day, the mayor of Breederiver municipality addressed the crowd of DCS members, inmates, NGO partners and SAPS officials.  He welcomed the us to the Breede valley, full of beautiful people, including himself, so he said.  “A valley of wine, bobotie, waterblommetjies – life on the platteland.”

Amongst the attractions of the Breede valley that he noted were the sprawling wine estates, brandy dustilleries, the Karoo botanical gardens, and Worcester, the birthplace of many famous South African artists, writers and musicians, including Nobel prize-winning author J.M. Coetzee, and musicians Arno Carstens and David Kramer.

One and a half hours north(ish) from Cape Town and Sonke staff Emily, Zithu, Silver, Londi and interns Brooke, Stephanie, Leila and Isabelle were basking the morning sun and resisting the blustering wind.

The mayor lamented the social and economic inequalities that this country still faces after the very high hopes of 1994, and stressed that HIV and AIDS are both a result and reinforcers of these inequalities. He pledged the municipality’s support and commitment to turn the tide of HIV and AIDS, and to collaborate with churches, academics, NGOs, government and all community partners.

He ended by leading the large group, of over 300 people with the famous, empowering chant, “Yes we can! Yes we can!”
The next speaker tried to light a candle to symbolize commitment to Breederiver’s goals for HIV and AIDS in the area: Zero new infections, zero AIDS-related deaths, and zero discrimination.

Unfortunately, the wind was too strong for the wick to light, but the deep commitment to and concern for these goals was obvious to all.  In fact, she proudly noted that all eligible prisoners were on ARVs.

To promote healthy living and exercise, DCS members walked a 3km route at 8.30 am, before the event kicked off.  Speaker Ms. Cocquot discussed a prevalent attitude towards walking – that we sometimes don’t even want to walk across the parking lot to the entrance of the shopping mall!  Very movingly, she gave thanks to God for her healthy body and two working legs, stressing that those unable to walk often deeply wish that they could.  On that note, everyone was invited to do a short aerobics workout.  One disappointing aspect of the exercise routine was that, out of the thirty or so voluntary participants, only a small handful were men, confirming and reinforcing the stereotype of men’s poor health-seeking behaviour, and turning the exercisers into a bit of a show.  Disappointment aside, those who took part had a ball – the energetic exercise was a great intermission in the sleepy morning’s sunshine.
Sonke’s Silver Tshabalala was next up, to a hushed audience. His powerful presence was matched by his powerful words, challenging every man at the event to join him and get tested for HIV. 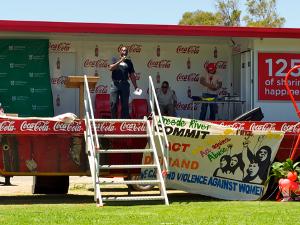 The event wrapped up with sessions of netball, rugby, a tug of war and HCT and TB screening.  We offered One Man Can shirts to the first ten people who got tested, and these were snapped up quickly.  HIV and TB Care did a wonderful job, as usual.  Big thanks go out to them, DCS for organising such a pleasant and informative event, and to everyone attending – a beautiful, postive day on the platteland.