The Detention Justice Forum, a civil society coalition that seeks to protect the human rights of those that are detained, calls for Macintosh Polela, spokesperson for the Hawks, to publically retract his statement made over Twitter on the news of JubJub’s sentencing: “I trust that JubJub’s supporters gave him a jar of Vaseline to take to prison.” 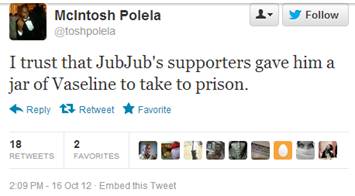 Mr. Polela’s statement is irresponsible and disturbing. It endorses deeply destructive ideas about manhood and prisoners, which feature in so much of the violence gripping our society, and which only lead to further harm and pain. His words dehumanise JubJub and prisoners more generally, underscoring the sentiment that prisoners deserve to be raped. We acknowledge that these types of sentiments are shared by many other South Africans – as vocalised on media and chat sites in the wake of the JubJub judgement. Despite our progressive Constitution, we often fall into a trap of blame and revenge. However, no matter who the victim is rape is rape, and it is never part of the punishment.

The rape of inmates constitutes a serious abuse of their rights, perpetuates the cycle of violence and is a key source of HIV transmission in an environment with anyway markedly increased health risks. The rate of HIV in our prisons is well above the national average, estimated to be between 19.8-40% and in addition to the psychologically devastating effects, rape can become a death sentence for the inmate who is brutalised. The impacts of sexual violence in prison – including further violence and ill-health – are profoundly felt inside prison and in the broader society to which most prisoners return.

Prisoner rape is regrettably a prominent part of South African prison life but is typically ignored, or the subject of undermining jokes. Contrary to popular misconceptions, with committed leadership, strong policies, and sound practices, the vast majority of sexual assaults behind bars can be prevented. Specifically, the Department of Correctional Services should adopt the Policy Framework to Address Sexual Abuse of Inmates in DCS Facilities, and the Minister of Correctional Services and Minister of Police should treat this as a priority issue.

As an acknowledged victim of violence himself, we call on Mr. Polela to be more careful that his pronouncements do not exacerbate the scourge of violence. And as a spokesman for the Hawks, a unit tasked with upholding the law and the Constitution of South Africa, it is inappropriate and disappointing for him to condone violent crime or make light of it, even on a personal Twitter account.

The undersigned organisations call on Mr. Polela to publically retract his statement. We also request a meeting with Mr. Polela by the end of October to engage in these issues and highlight the positive role that leaders such as himself can play in reaffirming inmates’ Constitutional rights to safety and dignity.