In honour of World Refugee Day, South African and refugee youths came together in Phillipi East on 21 June 2012, to combat xenophobia in their communities – on the soccer field.

Fostering a spirit of integration 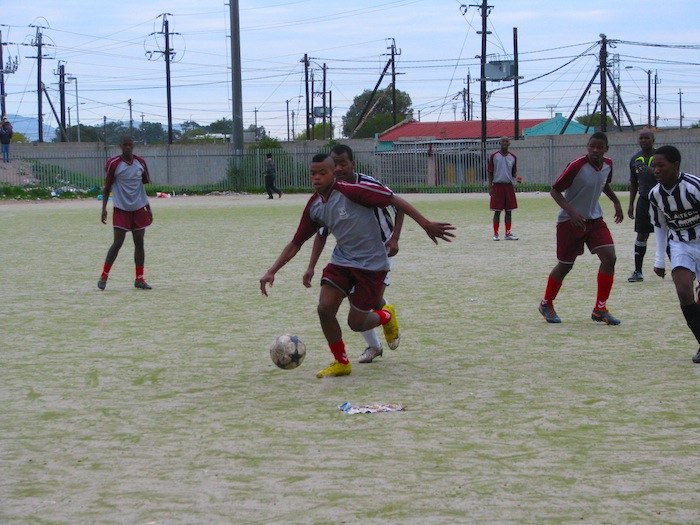 Six teams of high school students from around the Western Cape met at the Vuyiseka High School in Phiippi East on Thursday to compete in a soccer tournament. The event was organised by the United Nations High Commission for Refugees (UNHCR), in conjunction with the Sonke Gender Justice and ARESTA, to reflect on the challenges that the 57,000 refugees currently seeking asylum in South Africa today face, and promote a spirit of integration. The goal of the tournament was to foster the cohesion of mixed communities, often the breeding grounds of xenophobic attitudes, through sports. The games captured the ways in which South Africans and refugees can both work together – and win together – to promote Ubuntu and social integration.

In light of the xenophobic attacks of both 2008 and 2010 in South Africa, sports events like the tournament at Vuyiseka have been used as a means through which community members engage with one another to overcome prejudices and fear. Charles Mutabazi, the director of ARESTA, says that following the 2008 attacks, “we conducted research here in the townships and we found that ignorance, a lack of knowledge, and stereotyping are the cause.” He argues that xenophobia is still a problem in communities like Philippi, which foster an ever-increasing refugee population.

The six schools participating in the tournament were: Kwafundo, Maitland, Vuyiseka, Sinethemba, Phakama and Phandulwazi High Schools. The event commenced in the early morning and carried on throughout the afternoon. The crowd remained constant, with adults and children watching the main event, while others played impromptu games on the sidelines. Nomvuyo Mdlele, a UN Peace Ambassador from Lower Crossroads, says, “There was no one here today who said, ‘I’m a South African’ or ‘I’m a Zimbabwean’. There was only laughing, and so much dancing.” It was a meeting point for community members of all different nationalities, drawn in by the loud music but staying to partake in the festivities, and of course, soccer. In the final match, Sinethemba faced off against Phandulwazi. Sinethemba narrowly achieved a first place victory and the crowd roared with cheers of excitement and support. 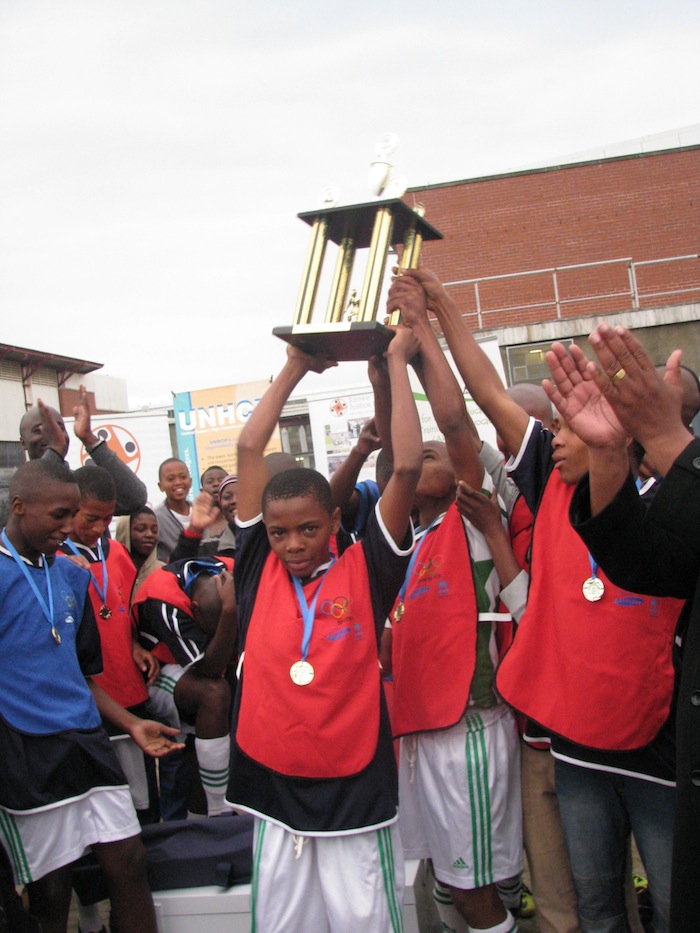 The soccer tournament is only one of the tools that organisations like UNHCR, Sonke and ARESTA are using to promote unity in the Western Cape. As one example, Sonke and partners use Ambush Theatre, where organisers stage a public incident to engage onlookers in dialogue about issues surrounding refugees. Micheline Muzaneza, who worked with refugees for more than eight years before joining Sonke in 2010, says, “Change is happening. You can see it when people come together and realize how similar they really are, but it is slow and it will take time.” The efforts of these and other social organisations are part of a broader mission to end violence against asylum seekers, with the continual hope of making South Africa a safe place for those escaping political and other forms of persecution.

At the conclusion of the tournament, organisers distributed crates of new sports equipment, donated by the International Olympic Committee, to the participants, encouraging them to carry the spirit of Ubuntu back to their school communities, through sporting events. As the sun set on Philippi, players shook hands and the UNHCR field office head, Patrick Kawuma Male, called the day’s events to a close. The mood was celebratory. For many, the event was the first time such a gathering had taken place in their community. The players had united in the spirit of the game.

“We’re kicking the ball for peace,” says Mutabazi. “When you come to the field, you put your differences aside and play the game. The spirit of the game brings you together.”

Agency for Refugee Education, Skills Training & Advocacy (ARESTA) is a non-profit organisation which advocates for and provides education, skills training and psychological support to newly arrived refugees who leave their homes in order to seek safety in South Africa. ARESTA’s holistic approach to working with refugees aims to help refugees and asylum seekers to grapple with economic, social and psychological issues in South Africa.

The United Nations High Commission on Refugees (UNHCR) leads and co-ordinates international action to protect refugees and resolve refugee problems worldwide. It strives to ensure that everyone can exercise the right to seek asylum and find safe refuge in another State, with the option to return home voluntarily, integrate locally or to resettle in a third country. It also has a mandate to help stateless people.

Sonke Gender Justice works on the intersections of gender and HIV, with a particular focus on working with men and boys. The organisation’s Refugee Health and Rights project focuses on engaging refugees and migrants with information and services relating to gender and HIV. This is important because refugees are particularly vulnerable to violence and may not have been exposed to sufficient HIV education and awareness in their home countries, where levels of HIV may be dramatically lower than in South Africa.