“Sport has the power to unite people in a way little else can. Sport can create hope where there was once only despair. It breaks down racial barriers. It laughs in the face of discrimination. Sport speaks to people in a language they can understand.”
— Nelson Mandela

Sonke has taken these wise words to heart, and has embarked on a series of campaigns that use soccer as a means of getting people together in a relaxed, happy environment and encouraging them to talk about serious issues like HIV, gender violence, women’s rights and Xenophobia. 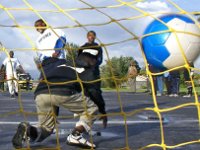 Readers of this newsletter will know that our first foray into Street Soccer took place in June 2008, only 2 months after Xenophobic violence broke out across the country. In this context of distrust, anger and fear, Sonke and its partner organisations, Hope World Wide, Western Cape Street Soccer League and Grassroots Soccer, hosted a Street Soccer Festival aimed at reintegrating foreign nationals into South African communities.

The run-up to the event included informal and formal discussions with young men about discrimination and xenophobia, and culminated in a call for groups of local youngsters to invite their foreign counterparts to join them on the soccer field. The competition itself took place in the aptly named Manyanani Peace Park in Khayelitsha, and included 14 mixed teams comprising locals and foreign nationals.

The success of this event led to a follow-on event in Gugulethu as part of the 2008 16 Days of Activism. The focus of this event was the participation of John ‘Shoes’ Moshoeu who called on the 120 young participants to use their strength to protect and provide for their families. 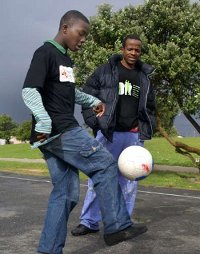 The most recent in this series of reintegration soccer events was held at Site B, in Khayelitsha in early 2009. This tournament again included only teams made up of a mix of South Africans and foreign nationals. This time, all teams participated in a 30 minute OneManCan workshop before the event, which focused on reintegration and on termination of pregnancy, educating young men about each woman’s right to control her own body. Informal discussion on discrimination, gender and HIV continued throughout the event.

In addition to using Street Soccer to reintegrate communities, Sonke and its partner Grassroots Soccer are using soccer as a access point for engaging kids between the ages of 12 and 18 in discussions around HIV and gender issues. The Skillz programme works with school soccer teams (boys and girls) using soccer analogies and exercises to help the kids understand issues around HIV and to relate them to their own lives.

Sonke’s Donald Ambe is a Master Coach in the programme, training other coaches in using the method and materials and 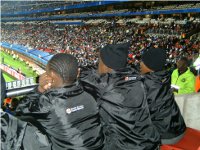 seeking to mainstream gender into all aspects of the training.

In addition to these duties, he also organises Street Soccer Tournaments for the youngsters to compete in. These events provide opportunities to extend the HIV education to other learners and also offer a space for providing HIV testing.

The next Street Soccer tournament is being planned for the end of September 2009 in Troyville, Johannesburg, and will hopefully feature appearances by some of the big name soccer players in South Africa.

Based on the success of these events, Sonke has also hosted discussions around ways in which the 2010 Football World Cup can be used to engage boys and men to achieve gender equality. And a task team has been setup to develop a strategy for 2010.