In his opening address at the MenEngage Africa Symposium, held in Johannesburg in early October 2009, Mr Mbatsha, Special Advisor for the Department for Women, Children and Persons with Disabilities succinctly summarised the importance of engaging men in gender justice: men are perpetrators of violence, men are key transmitters of HIV, and consequently, men can be powerful agents of change. It is this final point which participants at the Symposium rallied around. The delegates, more than half of whom were men, discussed men’s role in gender-based violence and HIV and focussed on looking at ways in which to work with men, change attitudes, present new role models, and mobilise men against gender-based violence and HIV.

The Johannesburg event follows the success of the Global Symposium on Engaging Men and Boys in Achieving Gender Equality held earlier this 2009 in Brazil. As the Co-Chair of the MenEngage Global Alliance, Sonke hosted the event with the aim that the symposium would allow delegates from across Africa to: 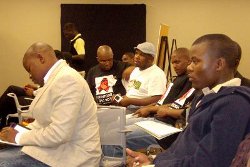 The symposium also aimed to strengthen the MenEngage Alliance across Africa and to forge partnerships between representatives from civil society, researchers, national governments, UN agencies and regional coordinating bodies such as the AU, SADC, EAC and ECOWAS, amongst others.

The range of people and interests represented was clearly reflected in the 5-day programme which created specific forums for discussing issues and themes, showcasing innovative projects and ground-breaking research, imparting practical skills and creating collaborative work plans. One of the most popular sessions during the event was the research panel.

The findings and analyses presented by the researchers added a great deal of depth to the discussions around how to take the work forward, and posed some important questions. The research presented by Kristin Dunkle, for example, gave insight into the role that perceptions of masculinity play in spreading HIV and in dealing with an HIV positive diagnosis.

Her team found that although HIV challenges ideals of sexual prowess and threatens ideals of male strength, some men have managed to reconcile their HIV positive status and masculinity by proactively taking on advocacy, leadership and peer-education roles in their communities, and also through supporting others. These findings have very exciting implications for organisations trying to work with men to prevent the transmission of HIV and reduce the stigma surrounding the disease.

We were pleased to be able to provide a platform for many of the campaigns and projects that are working with men and boys in Africa, including the new South African mass media campaign, Brothers for Life, which has been launched by JHHESA, Sonke, DOH and SANAC. The Campaign targets men over 30 around HIV and violence prevention. The powerful advertising that has been developed by this campaign moved many people in the audience and illustrated the diverse ways in which mass media can be used to reach large, geographically dispersed target populations.

It was also valuable to hear the impact evaluation results on projects in this field. For example, Chris Colvin from the University of Cape Town, reported that 27% of participants in Sonke’s One Man Can workshops go for an HIV test soon after the workshop, while two-thirds of participants report increasing their use of condoms after the workshop and 80% engage their families, colleagues, friends and communities in discussions around gender and HIV. Reports like this are steadily building the evidence base indicating that working with men can result in both attitude and behaviour change, and that this can happen in programme time – an evidence base that is essential for obtaining funding, identifying best-practice and fine-tuning interventions.

Space was also provided to hold discussions on the roles and responsibilities of various groups in relation to transforming gender stereotypes. Two very important sessions in this stream engaged religious leaders and media spokespersons in very lively discussions on the roles that they could and should play in changing attitudes, promoting new notions of masculinity, and challenging sexist and violent behaviour.

Throughout the event, youth participants reminded delegates of the importance of including young people in all phases of programme development, demonstrating the powerful role that the youth can play in changing attitudes and promoting new role models. In a dramatic contribution to the closing ceremony, one of the youth delegates summed up the vision and passion of the group: “I am a young man with a dream, a dream of a future, a prosperous future, where men, women, boys, and girls, young and old are equal and enjoy gender equitable lives, where men and women are regarded equally and not treated differently based on their faces and sex, where boy and girl children have equal opportunities, at home, at school and in public places, yes, I am a real young man working for that future, and that future is now.”

Although this event marks an important step in getting recognition for the critical need to work with men and boys to end gender-based violence and prevent HIV, there is still an enormous amount of work that needs to be done: national and international policies and treaties need to include specific provisions around working with men to achieve gender transformation; funders need to make additional funds available to support this work while also expanding the funds available for advancing women’s rights; additional research needs to be implemented documenting the impact that working with men and boys has on attitudes and behaviours; and programmes need to be developed and strengthened to target specific groups of men and boys, such as armies, police forces and prison populations.

These challenges have been documented in the Johannesburg Declaration and Call to Action which highlights areas in which specific action can be taken to strengthen work with men and boys. In addition to setting out specific actions that various stakeholders can take, the Call to Action generally calls on “individual men and women, youth, media, civil society, donors, private sector, governments and UN agencies to support the MenEngage Alliance and reaffirm their commitment to preventing gender-based violence and HIV by committing to working with men and boys.”