Money, Power and Sex: The Paradox of Unequal Growth was the theme for OpenForum 2012, co-hosted by Open Society Foundation and Sonke Gender Justice, and held at the Cape Town International Convention Centre. Delegates from around the world arrived at a Forum to discuss the thorny issues of money, power, sex and inequality in Africa. Most attendees were from the continent, and the vibrant mix of people, coupled with the ‘no holds barred’ approach to frankness and openness, made for stimulating and rigorous debate, and profound connection. 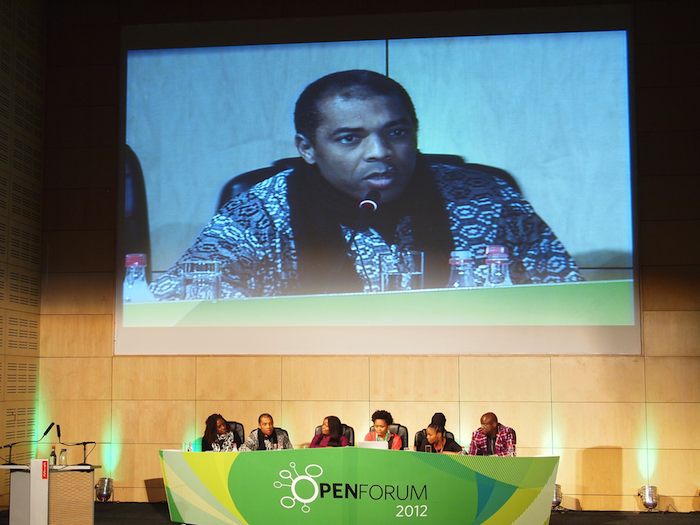 Each theme – money, power and sex – was discussed in relation to how it plays out in African and global society, chiefly in terms of inequalities. While some spent their time complaining that the forum itself – set in an expensive venue – was a symbol and ironic reminder of inequality, others got down to the business of thinking, learning and connecting. Here are some musings from four Sonke attendees.

Saint: “The Youth Summit was a great learning platform for me and the other attendees, because of the lively discussion that took place. For example, the group I was in discussed the topic, Too Exotic for Home.”

Londi: “We discussed what it means to be an African, especially in terms of cross-cutting identities of race, colour, gender, sexuality, and the (sometimes oppressive, judgmental and conservative) norms and traditions that many Africans claim to be the only way to be African.”

Saint: “The group agreed that it was very hard to define ‘being an African’ because of the complexity of the issue. Some African men see being African as following certain rules: Be strong, be powerful, defend your culture. Some women perceive it as being submissive, giving children to your husband, not talking where men are talking, and not having a say when a decision needs to be made. As a reflection, the question of African identity has been a sensitive topic of discussion for many decades, especially in South Africa, but the Youth Summit created a very good platform for young activists. Young men and women reflected on African identity with a human rights framework, challenging negative norms such as discrimination, negative practices of masculinity, and harmful traditional practices.”

Londi: “It was a real treat to be able to meet and spend thoughtful time with such a varied group of young people from the rest of Africa. In Cape Town I feel that I don’t meet Kenyans, Ghanaians, Egyptians, and other Africans enough at all. Photographers, artists, filmmakers, journalists and writers, activists and organisers – truly a group of the continent’s next generation of leaders.”

Tabitha: “’There is no such thing as a respectable revolutionary.’ This was said by one of the panellists on the second day of Open Forum, which had the theme ‘Power’. This particular panel discussion got my activist juices flowing as I wrote down quotes from some of the panellists. A feminist anarchist by the name of Mona Eltahawy left a great impression on me. Her words struck me with the power of her experience as an activist at the forefront of movements and ideas, not only in theory but also in action. The latter, for me, can be summed up by another of her quotes: ‘There is something in patriarchy that makes activists into professional activists – which takes away the revolution.’ Powerful stuff that will hopefully inform my future.”

Wessel: “On the third day, themed ‘Sex’, I attended the panel discussions about the current state of the women’s movement and the politics of sexual pleasure. The two previous days on ‘Money’ and ‘Power’ had proven to be very thought provoking. On the third day, as I rode on the business train with a cappuccino in hand, I was reflecting about the two days, when my train abruptly stopped.

We were asked to leave the train and the train station immediately. The word ‘bomb’ spread quickly through the crowd of stranded commuters. It was weirdly reminiscent of days in South Africa’s history where the same word had spread through crowds in similar situations. It was as if the group mentality still had very fresh memories of such events.

The station where we disembarked was in an place that I did not know, Bellville. I decided not to wait around for the train, but to set out in search of a taxi or bus. I had no idea where I was going, or where I was. I felt strangely out of place with my conference bag, neat shoes and tidy jacket, in the backstreets of Bellville. Ironically, I had suddenly been denied access to the money and power that I used to get to work on a daily basis, following the familiar routes of the business train or highway.

Help came in the form of a woman sweeping the sidewalk, who confidently nudged me in the direction of the closest bus stop.

Half an hour later, standing in the aisle of an overcrowded bus, crawling up the main road, I started to receive tweets from the day’s first session at the OpenForum. I had begun to cross the threshold into the event. The morning’s journey put me in a completely new place, very different from the familiar, comfortable middle-class routes to Cape Town. As the bus headed into the city, I clung to the OpenForum tweets in my hand like a leaking life-bouy, reminding me of the familiar, but also prompting me to look around me at the new.

I arrived just in time for the session on the politics of sexual pleasure. Like all of the other panel discussions at the OpenForum, the discussion forced open a new space. It insisted on a novel kind of reflection, poised in a moment that balanced intellectual debate with the ability to act on conviction. Two contributions stood out. The first was a beautiful, and almost poetic description by Kopano Ratele of an instant of intimacy between him and his son. His description opened up the possibility to think of intimacy as a natural, safe, and pure human experience. It was placed with artful precision as a conceptual anchor in the conversation on the politics of sexual pleasure. The other striking contribution to me was by Mona Eltahawy, Egyptian activist: ‘We removed the Mubarak in our parliament. Now we have to remove the Mubarak in our heads, and the Mubarak in our beds.’

The OpenForum opened a new space in my mind for thinking about our work. It also opened the opportunity for new interactions between my body and the world, such as the adventure through Bellville. What had the most significant effect on me however, was the combination of the two, of mind and body. This allowed the potential in my heart to navigate on new routes to the city, across the inequalities of money, power and sex.”