I spent my early childhood years living with my maternal grandparents who were teachers in a rural area where they came from, while my parents lived in the city where they were pursuing their education. My grandmother was my first teacher as I did not attend pre-school due to its far distance from our cottage and she decided to home-school me. Because of this arrangement, at a tender age of four, I was already taking lessons for Grade 1 learners – and excelling in them. I often called granny ‘Miss Kuku”, a name I created because I realised that not only was she my grandmother (Kuku in Kalanga), but she was also my teacher.

My grandmother taught me many life principles and, as my teacher, she also taught me how to read and write. She motivated me to learn and always told me that education was the key to self actualisation and success. My grandparents motivated me in so many ways to become the best I could be, particularly my grandmother. Very few women from her generation had careers. Most stayed at home and waited for their husbands or male children to provide for them and I always wondered why this was so. At some point I remember asking my grandmother why most women we saw were not working like her? She then told me of how when she grew up her own mother had to fight for her to get an education, as there was this belief that educating a girl child was a waste of time because she was a foreigner who would one day be married off to another family. She also told me of the belief that a woman’s place was in the kitchen and fields. So, education was not a necessity for her. Thus, many women had been disenfranchised of the opportunity to learn and pursue careers.

This bothered me a lot, particularly as I enjoyed reading, writing and exercising my intellectual thinking. I could not imagine myself robbed of an opportunity to pursue these and being quarantined to cooking and tilling, which by the way, I was terrible at and my grandmother called me ‘lazy’ in that regard. Much as I have subsequently developed my cooking skills, I have never considered myself as belonging to the kitchen space, nor have I felt out of place because of that for, contrary to the stereotypical narrative, I do not like cleaning, ironing, putting order in the house or any of those duties associated with ‘being a woman’.

It was perhaps from my ‘lazy’ point of view that I started challenging why it should be the duty of women alone to do household work and not men too. Also, much as my grandparents were my role models who worked hard and excelled in what they did, I still could not understand why at the end of the day it was grandmother who would have to ensure that there was a warm meal, the house was clean, grandchildren were fed, etc, when she also had a career. The inquisitive me asked her again why she had to do these things after work, since both her and my grandfather had jobs and she told me that there were certain things that no matter how accomplished a woman is they still remained her responsibility. This was a position I could not agree with since in my view both of them went to work, faced challenges and would be exhausted at the end of the day when they both got back home. I could not understand why it was then solely her responsibility to ensure that these other duties were executed while her partner ‘rested’. The ‘lazy’ me secretly disagreed with her and I always wondered if I could live up to such expectations. Fortunately for me, as I grew older I realised that I did not have to accept this stereotypical narrative about gender roles, I did not have to conform.

Perhaps my resolve to challenge gender norms and stereotypes was developed at the age of 11. A certain young girl called Jenifer, who was about two years older than me, had been brought to my grandmother by her mother to live with us. Jenifer’s father had died, and being the bread winner this left the family in a precarious position economically. Unable to educate Jenifer and her brothers, the mother then brought Jenifer – who was the oldest girl in the family – to my grandmother who had been looking for a helper to assist with household duties. She asked my grandmother to give her daughter the job, as they were in a desperate position and the family needed the money for upkeep and for the brothers to go to school. My grandmother was reluctant to give Jenifer the job because she was a minor and also as a firm believer in empowering the girl child, my grandmother felt it was inappropriate for Jenifer to drop out of school and work for her brothers. After much negotiation, my grandmother agreed to take Jenifer in on condition that she is not treated like a worker, but as part of the family – another grandchild. But Jenifer would be helpful with some household chores and my grandmother would give her family some money at the end of every month.

Jenifer and I subsequently developed a close bond as she became like a sister to me. We played together, did dishes together and any other menial work we could. She became family. My grandmother started teaching her how to read and write after school and she would submit her homework too. She was a keen and intelligent girl with a lot of potential and she enjoyed the lessons she was getting. The following year, my grandmother decided to formally enrol Jenifer for school. She informed the mother of her decision and explained that she would pay the necessary costs for Jenifer’s schooling – save for uniforms, which she would deduct from the money she sent to her as a way of holding her accountable to a certain extent for her daughter’s education. This proved to be the end of Jenifer’s education journey.

Barely three months after Jenifer started school, I came back home to my first heartbreak in life. My sister Jenifer had been abruptly taken away by her mum who was not happy with her being at school. She had found a family that was willing to employ her and give the mother more money.

I was heartbroken and hurt on many dimensions. Firstly, she had become a sister I loved dearly, my to go to person and my playmate, a relationship I could no longer have. Also, even at my young age, I knew that Jenifer was an intelligent young girl who had the potential to accomplish much and the thought that she could no longer have that opportunity hurt so bad. That her future had to be compromised for the sake of her family, particularly her brothers whose academic track record did not seem as good as hers, was devastating. I could not understand why that had been done to her. I cried so hard that day for my loss and for hers. I did not even know who to be angry at – her father who had died and left them with no means of survival forcing Jenifer to drop out of school and work, or her mother who had decided to take her away from us to another family where she would not have the opportunity to go to school, or life, as I kept hearing adults saying life is hard. We dreamt together and now for her those dreams seemed shuttered as she was doomed to a life of being a perpetual domestic worker and, perhaps ‘with luck’, getting married to some man some day. Jenifer tried to run away from her new home and come back to us, but the mother came back for her and threatened to get my grandmother into trouble if she took her in. In the end, at a tender age of 13, Jenifer had to accept her fate of dropping out of school.

I purposed in my young heart to one day fight for other ‘Jenifers’ like her not to fall prey to such a discriminatory and unfair society – a society that had robbed Jenifer of realising her full potential. At the age of 11 I did not know how I would do it, but I knew some day I would fight for women. As the journey of life took me through my own share of challenges, some of which left me broken and threatened the very desire to live and dream, I remembered Jenifer and realised it was time for me to also stand and fight for equality, for a just society in which men and women can live harmoniously, equally and with respect for one another. This is a society where human beings have equal opportunities and are free to realise their full potential. For me, this means challenging all forms of violence and institutions, structures and systems that perpetuate such violence. It is for this reason that I believe in the work that I do. 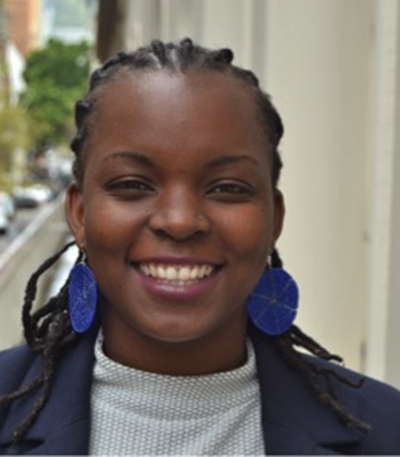