On behalf of the Government of Rwanda and the Ministry of Gender and Family Promotion, I welcome you all to this High-Level Meeting on “MEN ENGAGEMENT ON THE PREVENTION OF CONFLICT AND MANAGEMENT OF POST CONFLICT EFFECTS ON WOMEN”.

Welcome to Rwanda to those who came from other countries, we wish you a pleasant stay in Kigali.

I would like to extend my utmost gratitude to the organizers of this event: MenEngage Africa (MEA), Sonke Gender Justice and our country based Men Engage Network represented by Rwanda Men’s Resource Center (RWAMREC) for bringing together such a talented pool of participants for two days, to share experiences and lessons learned in relation to engaging men and boys for gender equality, the prevention of conflict and management of post conflict effects on women.

Based on this theme, I would like to assure you that you are in the right place to conduct this event because Rwanda has benefited from effective engagement of both men and women for sustainable peace.

As you are aware, Women account for more than 50% of the world’s total population. A greater percentage of the total African population consists of women and female children. Here in Rwanda, women make up 52% of the 11 million population. Therefore, this indicates that women form a dominant part of the society and have to be at the center of all initiatives, policies and programs that we initiate.

During the 1994 Genocide against the Tutsi in Rwanda, the country was left shattered. Women took up new roles as heads of households and engaged in rebuilding the country along with fellow men. Rwanda recognized that recovery and development would only succeed with women playing a central role.

Hence, gender equality and women’s empowerment is a cornerstone of the Government of Rwanda’s development agenda and a proven source of development progress. Women’s rights are of critical importance to Rwanda and Africa as a region for equitable and sustainable development.

On the issue of rights and specifically the rights of Women, the top leadership of our Government have made it clear that policy and legal instruments must reflect the ultimate purpose and efforts to transform the lives of people by enhancing their well-being, safety and access to equal opportunities by both men and women, girls and boys.

In this regard, allow me to quote His Excellency Paul Kagame, the President of the Republic of Rwanda. He said that: “With regards to empowering women and promoting their socio-economic and political participation, we continue to make modest progress. We believe that, besides improving gender relations in our country, this marks healthy progress toward realizing our vision of a united, democratic and prosperous Rwanda”.

Rwanda‘s experience in the progress towards gender equality and women empowerment is strongly linked to the role of political commitment at all levels, where today women and girls are enjoying the benefits of existing legal and policy instruments that are gender friendly.

Again the commitment of the Government was demonstrated by ratification of International instruments on gender equality and enactment of a number of laws at national level that have empowered women and girls.

Just to name a few, Rwanda ratified the Protocol to the African Charter on Human and Peoples’ Rights on the Rights of Women in Africa (Maputo Protocol) on 25th June 2004.

Rwanda also instituted a law regulating labor, which provides for equal opportunities and equal pay for women and men, and prohibits sexual harassment in the workplace.

As result of the high political will of the Government of Rwanda, in addition to a conducive legal framework in place, Women participation in leadership and decision making positions increased.

Women continue to play an important role in the community mediation and conflict resolution committee with 44.3%. Their contribution even goes beyond the Rwandan borders whereby they actively participate in peace building initiatives in other countries.

Even though Rwanda has done a lot in terms of eliminating barriers toward women’s rights; there still exist some challenges to be addressed, not only in Rwanda but also in the entire Africa and the World.

The prevailing situation of women across the continent includes economic exclusion, low level of representation in decision-making organs; sexual and gender based violence, poor access to justice, school dropouts, cultural norms, among others.

Therefore, the engagement of men and boys for gender equality and women’s rights promotion is really fundamental and needed. We need men to challenge gender stereotypes, to share equitably in family and household responsibilities, to be positive role models in their communities and their families.

I believe that great ideas from this forum will enable us to realize African Agenda 2063 aiming to achieve an integrated, peaceful and prosperous Africa for All.

I would like to commend the commitment of the Government of Rwanda to advocating and putting in place instruments that focus on eradicating inequalities and discrimination against women.

Furthermore, joint efforts by African states are required to ensure a conflict free continent, a continent where women are enjoying equal rights and equal opportunities as their fellow men.

As I conclude I wish you fruitful deliberations and on this note, I declare the High-level meeting entitled “Men engagement on the prevention of conflict and management of post conflict effects on women” officially opened. 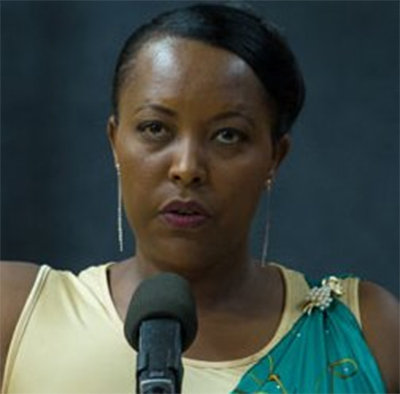