As the Oscar Pistorius trial for the killing of Reeva Steenkamp draws to a close, it is important to note that on average, three women are killed by an “intimate partner” (former or current) in South Africa every day.1

Tomorrow, on the same day that the Pistorius verdict is expected, 1,000 kilometres away in the Eastern Cape, another man who admits to having killed his former intimate partner will find out if the court believes his defense that he didn’t mean to do it, and whether he will go to jail. Nkosinam Xabadiya admits to stabbing Sandiswa Mhlawuli, a 27-year old mother of two. Eyewitnesses say they saw him do it, but he says he didn’t mean to kill her, that he was stabbing at her hands.

This is not a coincidence. In South Africa, more than 1,000 women are killed at the hands of their intimate partners each year. In fact, “intimate partner femicide”, which is the most serious form and consequence of domestic violence, is the leading cause of the murder of women here.

When Sonke Gender Justice (Sonke) got involved in the Sandiswa Mhlawuli case earlier this year, Xabadiya was walking free, without even having paid bail, even though he had been seen by witnesses stabbing Sandiswa. Sonke responded by supporting community members to organise protests outside the court house. We met with police and court officials, brought in the Commission for Gender Equality (CGE) and brought to bear sufficient public pressure to cause the police and the prosecution to take the case to trial expediently.2

Sonke’s Government & Media Manager, Patrick Godana, who has been leading our work to demand justice for Sandiswa’s murder says that the nature of the government service delivery around this case was inadequate. Godana also says the accused was allowed free bail because the police did not present compelling evidence at the time of his arrest, partly because police in Dutywa (where Sandiswa was killed) do not have cameras, forensic equipment and the resources necessary to bring cases of gender-based violence and murder to justice on a regular basis. “She died with a court protection order in her handbag,” says Godana.

Central to the Pistorius trial is the question of his intent and whether the killing was a domestic violence homicide.

There are many contributing factors to the high rates of domestic and sexual violence (there are an estimated more than one million rapes in South Africa each year). Key among them are patriarchal beliefs held by many men around the world that they are superior to women, and notions of masculinity that reinforce violence, combativeness, fighting or the use of guns and weapons.

“Multiple surveys carried out in nearly all regions of the world have found that the strongest factors associated with men’s use of violence against women are social norms that support men’s collective dominance over women,” says Sonke’s Executive Director Dean Peacock. He says that on top of this, “children’s exposure to violence in the home, alcohol abuse and easy access to guns all contribute to the unsafe environment women and children find themselves in.”

On Thursday, September 11, Xabadiya will learn his judgment, while the world waits with bated breath to hear only what Pistorius’ fate will be.

“From the beginning, Sonke has been saying that we must not lose the many in the one,” says Peacock, “Every woman who is killed matters – whether she’s the girlfriend of a world-famous Olympian, or a woman whose name hardly anyone knows in a rural village a thousand kilometers away. We can’t forget when Oscar’s trial is over that this is happening again, and again and again, every single day.”

The global media attention in the Reeva Steenkamp case, and Sonke’s involvement in the Sandiswa Mhlawuli murder case has helped these two cases move through the courts more quickly. Usually, though, men’s violence against women is treated as a low priority. Peacock says that government representatives pay predictable lip service to treating violence against women as a priority, but fail to follow up with the commitment and resources necessary for effective violence prevention measures, or for health and criminal justice services.

A 2009 Medical Research Council study shows that the great majority of female homicides in South Africa go by unpunished, with less than 38% of intimate partner femicides leading to conviction in less than two years. Consequently, far too many men learn that they can commit violence with impunity, and even get away with murder.

Sonke is calling on the South African government to invest in a comprehensive and multi-sectoral national strategic plan to combat gender-based violence (GBV). We know that we need serious investment in prevention efforts, policing and police training (including evidence gathering), courts, social support services, and the kind of gender transformative, and community building work that Sonke does if we’re ever going to be able to make deep inroads in combatting GBV. Some countries have recognised that such plans are essential to stop violence against women. We hope that South Africa will be next.

While Sonke can’t take a position on abuse or intent in the Pistorius case (since that is a question for the court), the reality is that when Pistorius killed Reeva, she joined South Africa’s statistics – she became one of those 1,024 women killed by an intimate partner in South Africa every year.

Reeva’s death is tragic, as are the deaths of the more than 1,000 women that have or will be killed in South Africa this year, but the global media attention of the Pistorius trial gives us the opportunity to demand that our government take action now and implement the kind of comprehensive national plan necessary to ensure that even if the justice system fails them, the deaths via gender-based violence of the many thousands of women will not be ignored.

We all deserve at least that much.

Also this week in South Africa

Shrien Diwani, who is accused of having hired men to kill his wife while they were on their honeymoon in Cape Town is expected in court for his pre-trial hearing.

Sandiswa Mhlawuli was killed on December 10, 2013 – International Human Rights Day and the last day of South Africa’s annual 16 Days of Activism for No Violence Against Women and Children.

Reeva Steenkamp was killed on Valentines Day this year.

A growing number of population-based surveys have measured the prevalence of IPV, most notably the WHO multi-country study on women’s health and domestic violence against women, which collected data on IPV from more than 24 000 women in 10 countries, representing diverse cultural, geographical and urban/ rural settings. The study confirmed that IPV is widespread in all countries studied. Among women who had ever been in an intimate partnership:

Some countries have already implemented national strategic plans to combat domestic and sexual violence, including the United Kingdom:

There are high-res photos of our mobilisations in the Eastern Cape available here:

You may print them/use them along with your related news story, as long as they they are used in correct context, and with proper credit.

There are captions in the dropbox as well.

You may also print the above media statement in its entirety as an article online or in print. If you do, please let us know that you are doing so by emailing czerina@genderjustice.org.za

Please use the byline: by Czerina Patel, Sonke Gender Justice 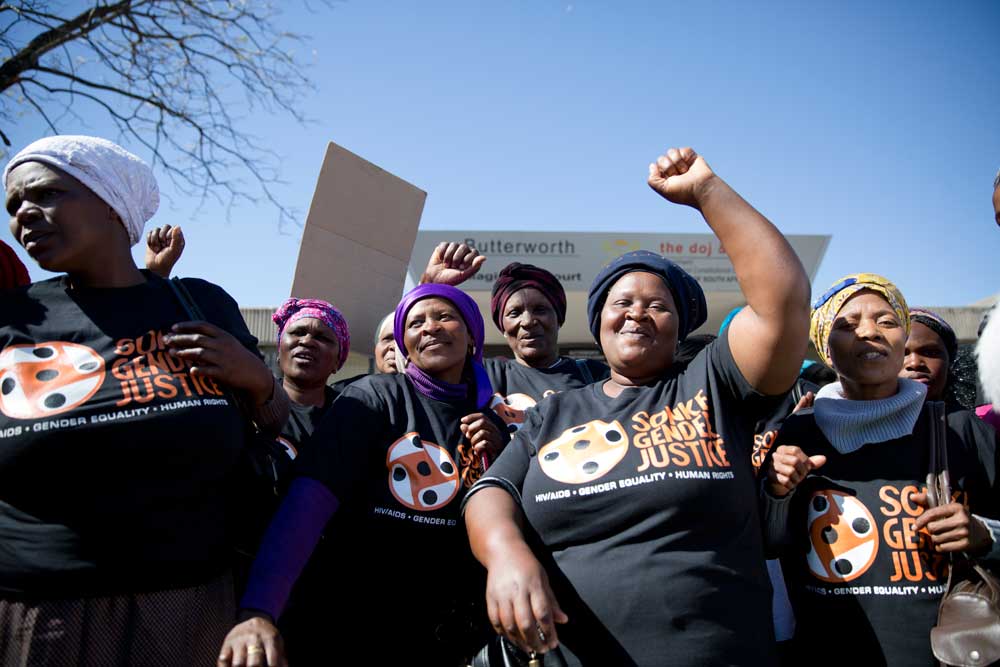