This edition of the South African National AIDS Council Men’s Sector Newsletter is the second for the year 2013 and covers a number of significant events over the last three months.

On 16 April 2013, men from across the nation gathered in Johannesburg, Gauteng to take a stand against gender-based violence (‘GBV’). This was done with the aim of mobilising millions of men in South Africa to stand against GBV. These men uttered the words “not in my man” and committed themselves, by taking a pledge, to stand against GBV in their own spaces. This dialogue was attended by the Deputy President of South Africa, Kgalema Motlanthe, and some cabinet ministers—Dr Aaron Motsoaledi (Minister of Health), Ms Hendrietta Ipeleng Bogopane-Zulu (Deputy Minister for Women, Children and People with Disabilities), and Collins Chabane (Minister in the Presidency). I am enthused by the commitments made by fellow men and activists and commit myself personally to following through on the commitments I made. 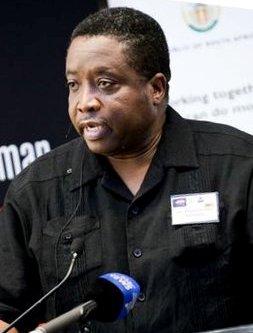 This event reaffirmed the Men’s Sector’s mission to attain its purpose of formation. The SANAC Men’s Sector was created to support all other national initiatives aimed at improving the health and wellbeing of South Africans and forms part of the SANAC Civil Society Forum. But, the Men’s Sector’s indication of purpose does not end there.

A day after the National Men’s Dialogue, provincial leaders of the Men’s Sector met to discuss a number of things. Among, and pertinent within those, was the commitment to host provincial dialogues and take part in the national men’s march in July and August 2013. I believe that if properly implemented this will create a sustainable response for a violence-free culture in our communities in a way that involves all members of society, boys, girls, men and women. I implore upon all of you to support this endeavour to the best of your abilities.

While positive strides have been taken in the recognition and realisation of human rights; some in our communities have been denied those rights. I am saddened by the recent deaths of at least 31 young men in the province of Mpumalanga and six in Limpopo. These young people lives’ were taken in the spirit of cultural practice. The fact that all members of society have the right to practice their beliefs cannot be argued. It is a right enshrined in the Constitution. However, where these practices violate the rights of others, as they did in this case, they cannot be constitutionally protected and must in fact be regulated. My article on initiation schools highlights some of these issues.

The extensive work done by Mmapaseka “Steve” Letsike, Chairperson of the South African National AIDS Council, Civil Society Forum is also featured. Letsike’s work ensures that the democratic, sexual and reproductive rights of LGBTI people are respected, protected and promoted. The challenges faced by the LGBTI community are also highlighted. I urge all of us in our sector to engage with these issues as we seek to strengthen our commitments in the NSP and related activities in the operational plans.

Like Letsike, I end on this note—there is a great deal of work to be done; but, as Laozi once said “a journey of a thousand miles begins with a single step”. The only way to end GBV is to do something about it; I encourage all readers to take a step now, and do their part to end this scourge in our beautiful country. I end on the same note that I did in the last newsletter: the struggle for healthy, equitable and violence-free societies continues. I thank you.