Social Mobilisation for Brothers for Life Campaign is intensifying 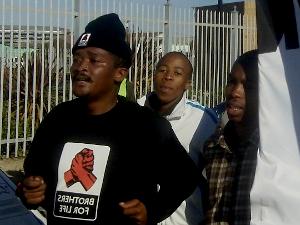 In order to spread the Brothers for Life campaign message further across South Africa, Sonke with JHHESA and other partners, has over the past two months convened workshops of organisations working with men in eight provinces.

The exception was Gauteng where there were communication challenges. Sonke is working hard to bring this province on par with others. In total, 25% of the participants were women.

Driving these workshops was the need to sell Brothers for Life as a vehicle for organisations and government departments to use in their own campaigns as well as create space for the consolidation of the SANAC men’s sector in all provinces.

Typically these workshops were attended by representatives of the provincial Departments of Health, civil society groups, religious formations and women’s rights organisations. Without fail all participants across the country declared their commitments to the Campaign. Provincial steering committees were set up to coordinate the implementation of agreed to action plans emanating from the workshops. Highlights of the commitments made in the workshops includes: 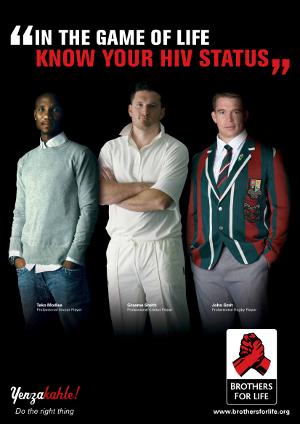 “As Brothers for Life, we are very pleased to learn that our campaign objectives are derived from the same source as that of the province, which is the National Strategic Plan.

We seek to get men to play a positive and progressive role in the reduction of the spread of HIV and Aids, get them to also play a supportive role to their pregnant partners and most importantly to stop gender-based violence and the abuse of children”, said Stubbs Maluleke, one of Sonke’s staff representatives for Brothers for Life.

Other achievements in this period include the training of facilitators from the provincial men’s sectors and JHHESA partners on how to use the toolkit developed for mobilisation. To date such training has occurred in three provinces and with four JHHESA partner organisations. The objective is to train a core set of people in all provinces and six JHHESA partners by the end of September.

The Brothers for Life campaign is a national media initiative targeting men over the age of 30. It aims to address issues such as the risks associated with having multiple concurrent partners, men’s limited involvement in fatherhood, lack of knowledge of HIV status by many, low levels of testing and disclosure, and insufficient health seeking behaviour by men in general. August marks the first anniversary of the Campaign, which was officially launched in 2009 in KwaMashu, KwaZulu-Natal. During the first year, the highly visible campaign has received a hugely positive response from various sectors. The campaign has made excellent use of a range of media, including billboards, print and electronic adverts, street pole adverts and buildings wrap ups to spread the message. The strength of the campaign has been boosted by the participation of a number of well known sports personalities, particularly during the World Cup.The Brothers for Life campaign is an initiative by Johns Hopkins Health and Education in South Africa (JHHESA), Sonke Gender Justice, South African National Aids Council (SANAC) and other key stakeholders to engage and work with men to take a leading role in promoting behaviour change of men on having multiple concurrent relationships. This helps in reducing the spread and impact of HIV and Aids. Sonke coordinates the social mobilisation aspects of the training.