In the last year, Sonke has continued to grow, and its efforts to combat sexism and gender-based violence have deepened. There has been no clearer sign of the organisation’s commitment to a non-sexist South Africa, than its ground-breaking case against Julius Malema, in the Equality court. The fact that the Court ruled that Malema’s careless words were in fact hate speech, is incredibly important in a context in which every single day, women are harassed and intimidated by ordinary men.

During the period covered by this annual report, I was pregnant, had a baby and was on maternity leave. In the months after my son was born, I took to the road, to try to shed a few postpartum pounds. Having had two babies in three years, I was ready to get back in shape. The prospect of the gym was not appealing – the clanging weights, the recycled air. So I opted instead to get my exercise outdoors. The temperatures have been perfect for the long walks that my doctor recommended to ease me back into the swing of things.

Each time I have been out there walking, I have been reminded that seventeen years into our democratic dispensation, we may have come a long way, but we have so much further to go. There is an incident in which I am harassed each time I walk.

I am at pains to dress ‘appropriately’. Long pants, jersey around my waist so the bum is out of view, loose-fitting top. I am also at my least glamourous, in my post-partum phase so I am about as far away from sexy as you can get on the scales. This of course means nothing. It has not stopped men from trying to stop me, it has not stopped them from calling out behind me until I am out of earshot, and in a particularly scary incident, it did not stop three men from following me and laughing as I got increasingly frightened on a quiet suburban street in Emmarentia. 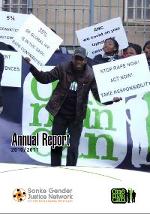 I am aware that I have relatively little to complain about. I have been warmly ensconced in my middle class life for the last few years. I drive everywhere: to the office, to the shops, to the café down the road, to the gym. It has been so long since I have walked anywhere that I had forgotten that being on the street – if you are a youngish black woman – can be a nightmare. Everyone from the drivers of passing taxis and cars, to men who happen to be walking past, feels that they have a right to comment on your body – regardless of how much you try to cover up.

In May 2011, South Africans hit the polls for local government elections. Across the country, poor communities in which local councillors do very little and get paid a lot, cast their votes. The record turnout was attributed to the fact that most South Africans are unhappy with service delivery. It was a message to the ruling party that while communities are still willing to vote for the ANC, they are watching, and their patience is not infinite.

There are many reasons why I am committed to the project of working with men, and why I am especially pleased to Chair the Board of Sonke Gender Justice. But my commitment has been renewed over the last few months, because of the very personal ways in which I have experienced the physical threat of men.

I was surprised that in the run-up to elections, there was so little talk of what women want at a local level. Of course women want houses, and decent roads and proper toilets, just like men do, perhaps even more so, frankly. But surely, women across South Africa would like not to worry about their daughters walking from one neighbourhood to the next. It sounds like a small ask – I am not talking about reducing hard-core crime here, I am simply suggesting that a South Africa in which all of us are free, is a South Africa in which women and girls can walk to point A to point B, without catcalls and verbal harassment.

In all the talk about crime in South Africa, the headlines around women’s safety always focus on rape, sexual assault – the most egregious of crimes. Understandably so. But surely, it is a fundamental right of every citizen to simply be allowed to walk down the street undisturbed. And surely local government has a role to play, as do our schools, and our street committees.

The Freedom Charter states, “South Africa shall belong to all who live in it.” I am not sure how much I belong, when I cannot perform the most basic of functions without fear of intimidation. The problem with not being able to walk down the street is two-fold: firstly it is a fundamental breach of my rights to dignity and freedom of movement; but secondly it signals violence. The unspoken whisper when the horn is tooted, or when someone follows you, is “I could hurt you if I wished to.” And of course there is a chilling effect: if you can get harassed for simply going for a run in baggy track suit bottoms, what more, when you really show some personality? When you wear tight pants, or talk back? When you climb too high or dream too big? What more if you are a lesbian?

A few years ago there were a number of incidents in which teenage girls were stripped naked and publically humiliated by angry mobs for daring to wear mini skirts. In the last year, there have been outright murders: lesbians or girls and women suspected of being lesbians have been victims of a grisly practice that the media has called ‘corrective’ rape. These acts are rooted in men’s disrespect of women’s fundamental rights to assert themselves – whether that be by running to get fit and strong, by wearing mini-skirts, by loving another woman, laughing too loud or being too bossy. As Sonke grows, it is increasingly looking beyond changing men’s attitudes. While working directly with men to change their attitudes remains an important element of rooting our work in communities, and in improving the lives of women, there is also a pressing need to hold state institutions accountable for guaranteeing that women feel as much a part of this democracy as men. South Africa is entering an interesting decade, in which the fundamental values that underpin the conduct of a democratic state and its citizens, are up for debate. This is both frightening and energizing.

For Sonke, it provides an opportunity to undertake important work around transparency and accountability – fundamental tenets of democracy. This has been the impetus for our efforts to monitor the police and the prisons system in the Western Cape. It has also driven our commitment to public debate. We have added our voices to public events like the murder of Andries Tatane by SAPS members and the case of a father who was denied access to his children because he had failed to pay for lobola.

In all our work, we strive to be as strategic as possible; leveraging our unique position as an organisation that has significant access to ordinary men, to ensure that the societies in which we work, are places that work for women and men together.