Sonke at the 12th AWID Forum

The Association for Women’s Rights in Development (AWID) is an international, feminist, membership organization committed to achieving gender equality, sustainable development and women’s human rights. Every few years the association hosts an international forum, open to those with an interest in women’s rights. Bridget Mnyulwa and Londi Gamedze, both working for Sonke’s Communications and Strategic Information Unit, attended the Forum in April this year. 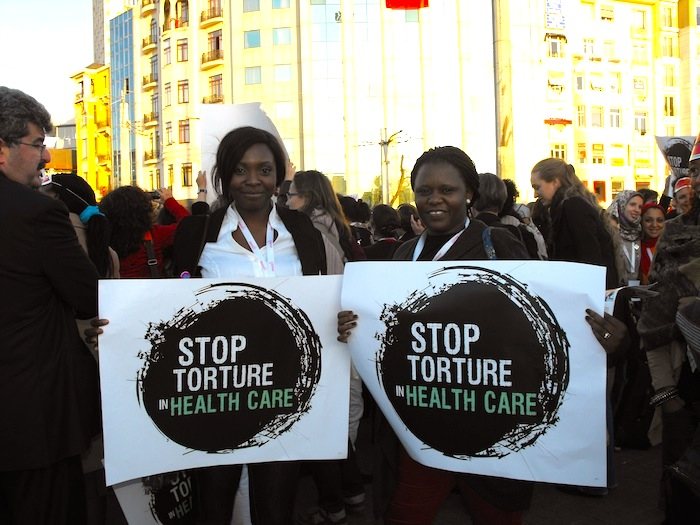 The forum took place in Istanbul, Turkey, and attracted in the region of 2,500 participants, with the overwhelming majority being women. The overarching theme for the forum was ‘Transforming Economic Power to Advance Women’s Rights and Justice.’ The morning plenaries focused on this topic, and a large number of break-out sessions offered were designed to deepen participants’ understanding of the economic forces affecting both the women’s movement and the lives of women we work with.

The forum was held in the Halic Congress Centre, located on the gorgeous Golden Horn of Istanbul, an inlet that divides the old city from modern Istanbul, which is located on the east of the Horn.

Bridget’s thoughts: Controversy over working with men and boys

“I had mixed feelings going to the AWID Forum. I was ecstatic about attending a forum of such magnitude, and I was looking forward to meeting and engaging on various levels with hundreds of great, inspiring and intelligent women from across the globe. However, I was also mindful of the fact that there are several traditional feminists who are sceptical of the work we do, that is, working with men and boys. As a young feminist, an employee of Sonke and an African woman, I have encountered resistance from many former colleagues from the gender institute I was affiliated with at university, and from some feminist family friends, particularly from the older traditional feminist movement who believe Sonke and other similar organisations are taking over the movement and resources that would otherwise benefit women who have suffered for decades under men’s oppression. Therefore it was not surprising to be met with the same resistance at the forum. One of the older feminists chaired a session in which she bluntly responded that “…this is not the space and time to talk about involving men in the work of gender-based violence…” She said this after I had asked a question if they had thought of involving men or engaging organisations working with men and boys in some of their interventions.

Nevertheless, it was encouraging to meet and hear young feminists from across the world referring to the work of Sonke and the importance of involving men and boys towards gender equity and promoting healthy relationships particularly in relation to gender-based violence. There was a constant call from young feminists present to re-examine our day-to-day advocacy activities to ensure there is inclusive involvement of men and women, boys and girls in the fight towards gender equality.

As a young African feminist attending an international conference of that size, it was truly an amazing experience, overwhelming and completely engaging. Every participant had so many ideas and positions and experiences and I was constantly challenged on what I could possibly contribute to such a conference. In some sessions and in between breaks I had the opportunity to sit, think and share with other young women from all over the world on how they can contribute and strengthen the work with men and boys as a proved intervention towards achieving gender equality.”

“At the forum I engaged for the first time with the concept of the Care Economy. In most societies, women perform the bulk of unpaid domestic duties, which include caring for children, the sick and working in the home. Women source food, cook, clean and care for their families and community members in many other ways, and this work is usually either on top of income-generating work or instead of it.

This situation greatly compromises women’s ability to participate in many other activities, including community decision-making, leisure activities, studying and education, and so on. If a woman stays in the home performing domestic duties, she may also lose access to spaces like workplaces where she can speak her mind about her life and situation and hear other women speaking their minds – these are vital spaces for activism, development and community change.

If a woman must keep a paying job on top of her responsibilities in the home, then she may suffer from what is known as ‘time poverty’. This may trap women in their situations, because they may not have time to study or train further for a better or different job; they may suffer from burnout and fatigue, and may not have the time or energy to care for themselves or their children as much as they would like. And of course, leisure is a human right. We should not be working every waking minute; it is stressful and severely unhealthy.

The main question of one breakout session, called “Feminist perspectives of work”, was whether people (women) should be remunerated for what is currently unpaid care work. Arguments in favour of remuneration said that care work is real work and should be rewarded as such, and allowed to officially and financially contribute to a country’s economy.

Despite being largely unpaid and hence not contributing to economic indicators like the GDP, work in the care economy and the home are indispensable staples of our society’s economy. Unpaid work in the home ensures that children get to school, are fed, well-adjusted, loved, productive and healthy, and the same for a large portion of the workforce – husbands who are fed and kept returning to work day after day. Without the invisible work done in millions of homes around the world, economies would grind to a halt; it sustains our communities and our labour force. This is one of the chief reasons cited for remunerating care work – as it benefits the economy it should be rewarded with like economic gain. In addition, proponents of this view argue that women who had not previously had the opportunity to do so could become more financially independent. This particular issue is deeply related to domestic violence. In communities around the world where women are expected to remain in the home and not take paying jobs, men have huge power over women, and women in such relationships often have no recourse to escape. Empowering them economically could have a great impact in reducing domestic violence against women, as women could amass the financial power to save up, leave the relationship and sustain themselves.

One argument against the remuneration of unpaid care work says that it is not a good idea to monetise the relationship between mother and child – that such a relationship cannot be translated into a value that money can express, and that parental care should not be given for economic return, but out of love.

Discussions on these topics led me to mull over Sonke’s Fatherhood project. The project is part of a global fatherhood initiative called Men Care, which encourages men to become more involved in the lives of their children, and provides practical ways for fathers to do this. One of the campaign’s central principles is “Support and respect the mother”.

I personally do not like the idea of introducing the barrier of money into the parent-child relationship, but realise that women around the world suffer from not being recognised for their unpaid work. Ultimately, I do not believe that utilising our world’s current way of doing capitalism could possibly do justice to the energy and time that women put into their families’ well being. I think that the care burden should remain unpaid but that a social, not an economic change, must happen. And that change is men sharing the work in the home, reducing the burden on women, and ultimately bringing men closer to their families.