From 7-10 June 2011, Sonke participated in the country’s bi-annual HIV conference, SA AIDS 2011, held in Durban. The conference attracted activists, academics, medical practitioners, human rights lawyers and advocates from South Africa, the region and abroad, all working towards reducing HIV infection and minimising the social, legal and medical consequences of HIV and AIDS. 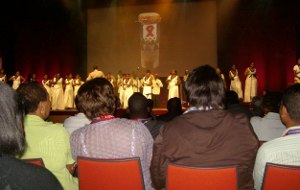 Sonke’s Tim Shand and Leader Kanyiki Ngooyi presented a paper on how discussing Medical Male Circumcision (MMC) with men and boys can provide a platform for debate on gender equality, women’s rights and the cost of negative masculinity stereotypes. Education about the benefits of MMC in the prevention of new HIV infections should also form a key part of these discussion.

Mbuyiselo Botha of Sonke co-chaired a session on gender and social norms with Sonke Board member Rachel Jewkes of the Medical Research Council.

Francois Venter, chairman of the conference, gave Plus News – the global online HIV and AIDS news service of the United Nations Integrated Regional Information Networks (IRIN) – five reasons to be happy about the country’s progress:

Are these achievements worth enough to celebrate?

Despite these progressive developments, South Africa has a long way to go in effectively addressing the HIV pandemic as still more than half of those infected are currently not on antiretroviral treatment. Furthermore, discussions and research findings prove that negative masculinities and harmful social norms are still rife and it will require radical efforts to transform gender perceptions and inequalities.

One of the conference’s highlights was the Nkosi Johnson Memorial lecture at which Mandisa Dlamini presented a talk. She encouraged the activist community to place more of a focus on the needs of children with HIV positive parents, who not only may suffer the loss of their parents to AIDS, but also often experience the social stigma that their parents faced, with very little, if any, support from their communities and social services.

Mark Heywood of Section 27 spoke vividly about the correlation between youth, education and HIV, emphasising the state’s constitutional duty to educate its youth as well as adults.

In light of this, Chief Justice of the Constitutional Court, Sandile Ngcobo spoke to the development of South African law on the issue of unfair discrimination towards HIV and AIDS sufferers, citing the state’s constitutional obligation to treat all persons equally.

MMC was discussed at length from various angles. Perhaps the most important issue raised was that although medical male circumcision is said to reduce the risk of HIV infection by 61%, we need to not forget that testing, condom usage and other safe sex practices remain imperative to HIV prevention, irrespective of men, boys and infants being circumcised.

Another highlight of the conference was Dr Adila Hassim of Section 27’s presentation on the costing and budgeting for the National Strategic Plan (NSP) on HIV and AIDS. She stressed the importance of proper planning, costing and budgeting to meet the treatment and prevention targets set by the NSP, to enhance the effectiveness of the plan and to enforce the state’s duty to deliver on its health commitments as enshrined in the constitution.

Shortcomings of this year’s conference

The bi-annual HIV conference did not create adequate platform for discussion on sex between persons of the same sex and HIV and AIDS save for a satellite session that focused on the topic of HIV, lesbian, bisexual women and women who have sex with women presented by the Human Sciences Research Council and other organisations within the region which revealed important research findings on women’s perceptions on HIV and sex with the same sex in terms of risky sexual practices and women who have sex with the same sex’s sexual history with men and its connection to HIV contraction. Lesbian and bisexual women, and women who have sex with women from Zimbabwe, South Africa, Botswana and Namibia took part in the survey. These findings have not yet been publicised.
Also, there were only a few representatives from gender organisations at the conference, both in the main conference and the side sessions.

We should make a concerted effort address LGBTI issues in conjunction with HIV to change inaccurate perceptions of HIV and sexual orientation and/or sexual identity. We should also work on raising awareness of other genders and work to eradicate discrimination against lesbian, gay, bisexual, transgender and intersex persons, particularly in recognition of the intersectional grounds of gender, sexual orientation and/or sexual identity and HIV status.

As always, the SA AIDS conference showcased enlightening information, new and exciting research and a good dose of encouragement from the work being done across the country and the continent.