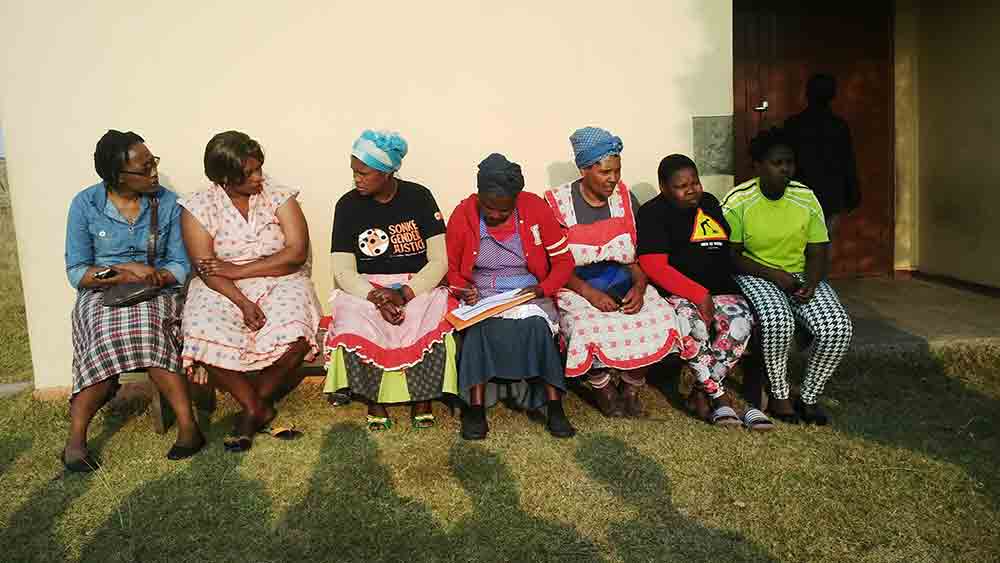 Sonke’s Policy & Advocacy Director, Vuyiseka Dubula; MenCare Government & Media Manager, Patrick Godana; Senior MenCare trainer, Leo Mbobi; and One Man Can Trainer, Mzwakhe Khumalo, are in the Eastern Cape again, following up on a murder case that we’ve been advocating around during the past six months.

You may have read about the murder of Sandiswa Mhalwuli, a 27-year-old unmarried mother of two, who was stabbed to death in December last year. Eye-witnesses say her ex-boyfriend Nkosinam Xabadiya (then 29-years-old) pulled her out of a stationary commuter van and stabbed her multiple times:

Sonke has been working in Dutywa and the surrounding areas to push the justice system to properly prosecute this murder, and also to work with the community to build awareness around gender and violence, and to promote both gender-equality and non-violent relationships.

We’ve done a number of workshops in the community around fatherhood, gender activism, gender equality, and sexual & reproductive health and rights.

We’ve also done a lot of work with bringing the Commission for Gender Equality (CGE) into this case, and with the Chafutweni Community Action Team (CAT). We are working with community members who are committed to mobilising themselves to combat gender-based violence and to further gender equality and justice.

Today, we have regular updates from the court case in Butterworth from Patrick Godana (edited and pasted below). Below the court updates is a further description of our work in the area yesterday from Vuyiseka Dubula.

Images come from our Sonke team there (Patrick, Vuyiseka and Leo), and include images of Sandiswa, given to us by her family.

We cannot bring back those whose lives have been tragically cut short by intimate partner or gender-based violence, but we can and must continue to work to stem the tide of violence in our country, and to push for a justice system that properly works for victims.

It is because so many people are suffering what Sandiswa suffered that Sonke is repeatedly, urgently and loudly calling for our government to implement a costed, funded, multisectoral national strategic plan to combat gender-based violence immediately, and with measures for accountability, timelines and proper implementation in place. Please join us in this call.

We will continue to keep you updated about our work in this case.

8/13/14 7:24 : Speaking at Ibiza in one of the villages next to Roma – event organised by local traditional chief and the local ward councillor.

8/13/14 7:33 : Ready for the court case… just received a call from Capt Matshoba (Idutywa detective unit) that court will start at 9am sharp as the doctor who conducted the postmortem has asked to be first and leave to attend to her/his private practise. All systems are in place. Taxis will pick up all Community Action Team members (CATs) at their respective pick-up points as agreed in our planning meetings.We shall assemble opposite Butterworth post office and march towards the regional court singing peace and struggle songs…

8/13/14 9:42 : Right in court waiting for the judge…The accused has just taken the witness box and the prosecution has also called in Dr Potelwa to the witness stand.

8/13/14 9:42 : The prosecutor is now asking the doctor for his credentials and the extent of his medical practice as the district surgeon.

8/13/14 10:55 : The accused claims that he had proposed marriage to Sandiswa in November as he planned to visit her family to arrange marriage…

8/13/14 11:21 : He says the quarrel started over the phone as the accused is claiming that she was writing an sms and wanted to know about the sms’s.. He says she then put her phone in her bag and he grabbed it… he claims she grabbed his private parts… and says, then he took out a knife and he stabbed her 2 times and in trying to scare her. He said she was screaming that he was injuring her, but he did not not notice that.

Description of Activities in the area on Tuesday August 12, 2014 – by Vuyiseka Dubula

Today we met leaders of the villages surrounding Qhora including Roma, Chafutweni and other villages under the leadership of chief Nosizwe and a young woman chief.

There were about 60 people at the chief’s home (Komkhulu at Lower Qhora) and we were given time to address the imbizo. This began with overview of Sonke as an organisation and our work in the Eastern Cape. This ended up being a 2 hour workshop on basic rights literacy, gender equality, positive parenting and role of man in the struggle against gender-based violence.

Questions were allowed towards the end. Questions asked involved the following topics:

Description of Activities in the area on Tuesday August 12, 2014 – by Vuyiseka Dubula

We reflected on the case hearing (to prosecute the murder of Sandiswa Mhlawuli) that happened in July and reported back on the Community Action Team (CAT) activities.

We also did a short presentation about basic organising and helped the CATs with their plans for this month. This includes follow-up training for the current CATs to capacitate them to take more leadership at local level, and training for the traditional and religious leaders in the area.

Four CAT members will volunteer in the local clinic to encourage and promote health-seeking behaviour. The group volunteered four members (women and men) to be trained by the Treatment Action Campaign (TAC) to conduct HIV workshops (for other CAT members and the local clinic) in the village.