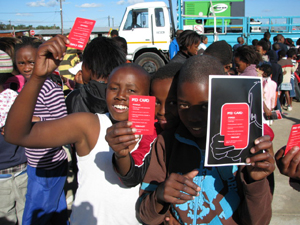 On 9 June 2010, just days before the launch of the World Cup, Sonke officially launched the Red Card Campaign against Child Sexual Exploitation.

The campaign was activated in a number of sites across Johannesburg and the Western Cape, with additional activities taking place in Port Elizabeth. In essence, the campaign seeks to reduce children, and especially girls’, vulnerability to sexual exploitation in South Africa and elsewhere in Southern Africa.

The initiative also seeks to increase awareness regarding sexual exploitation generally and increase the ability and willingness of people to intervene to prevent and/or report it.

In preparation for the campaign activation day, Sonke conducted training in both sites with selected volunteers from different communities. The training focused on forms of sexual exploitation, particularly involving children, and on how to use the Red Card as a tool to stop it. Participants learnt about “red card fouls”, such as having sex with someone under age or buying stuff to get sex from a young person, and were equipped with red cards to use when the encounter any of these situations.

Selected partner organisations have also been engaged, sensitised and trained on the Red Card methodology and are assisting in the role out of the campaign.

In Johannesburg, organisations that are working with Sonke on the campaign are situated in Orlando East, Orlando West, Klipspruit West, 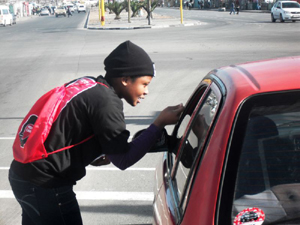 In the Western Cape, the Red Card Campaign activation took place in three communities, namely Khayelitsha, Atlantis and Claremont. As in Jo’burg, the activation included a range of activities, including a door-to-door campaign, a Red Card quiz, Ambush Theatre performances and broad distribution of red cards at transport hubs, traffic lights and shopping malls.

In all the sites, the Red Card Campaign was well received with red card recipients acknowledging that child sexual exploitation is rampant in their communities and supporting the effort to do something proactive to stop this. It was especially encouraging to see how taxi drivers and taxi rank marshals showed an interest in the initiative and the sexual exploitation fouls which deserves the red card.

While Sonke has been conducting these activities, our partner organization, Grassroot Soccer, have done extensive work with youth during their holiday camps to explain child sexual exploitation and its implications in terms of HIV risk. They have distributed over 200,000 Red Cards through the Skillz Holiday Supplement and have incorporated the Red Card approach into their curriculum for continued use.

Sonke has adopted Ambush Theatre as a key means of raising awareness about sexual exploitation and the Red Card approach. 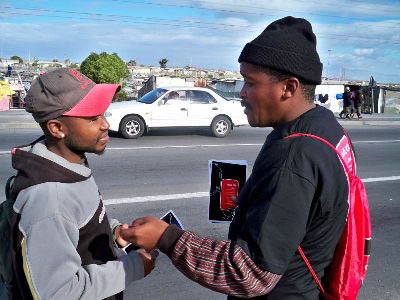 The Red Card toolkit includes instructions on how to perform Ambush Theatre and an Ambush Theatre instructional video and real-world demonstration filmed at the Claremont taxi rank during the activation. This performance clearly indicates how Ambush Theatre can be used to get attention and spark debate and discussions around sexual exploitation of children and the fouls that deserve the Red Card.

Leo Mbobi, Western Cape Red Card Campaign Coordinator said, “Our campaign strategy and intervention adopts a proactive approach to the problems that communities are facing daily. We are working with communities to constructively come up with practical ideas and actions that can be used to transform negative and harmful behaviour that perpetuate sexual violence against children and women”.