MenEngage Africa Alliance chairperson, Hassan Sekajoolo, called on alliance members to double their efforts as they continue working with men and boys to promote gender equality. He also called on members to strengthen their work with women’s rights organisations so that, together, we move towards fast-tracking the attainment of gender equality in Africa. Sekajoolo was speaking at the opening of the two-day MenEngage Africa AGM that was held in Nigeria on 12 & 13 February. 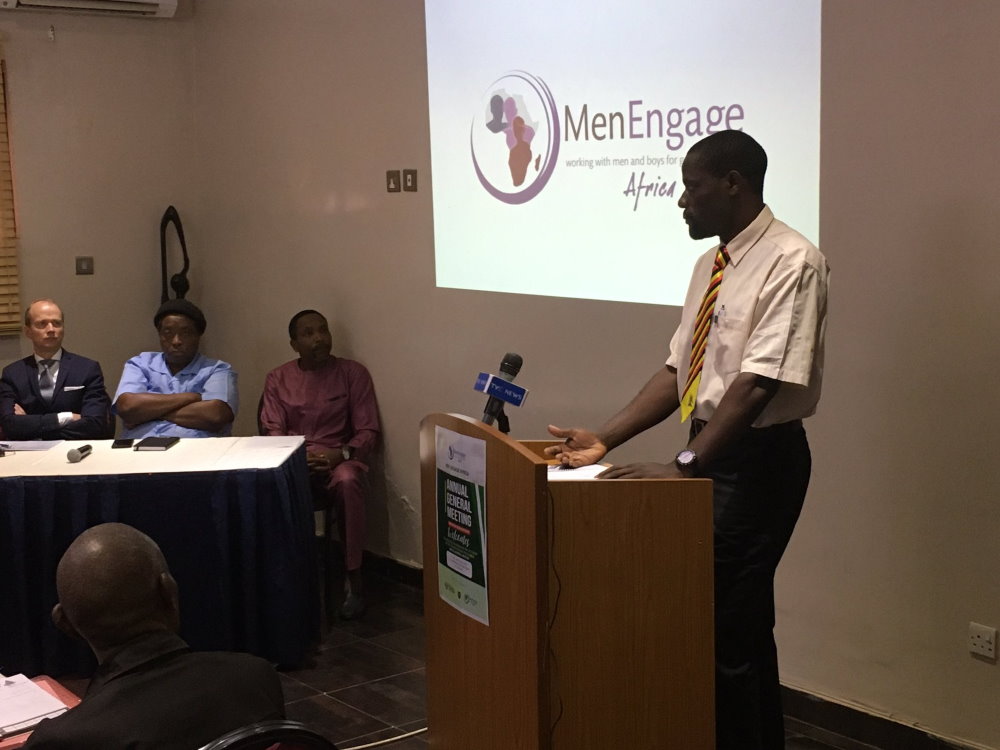 Your Excellency the Ambassador of Sweden to Nigeria

Last year, November 2019, our advocacy efforts in the struggle for gender equality were boosted by a report from the McKinsey Global Institute on gender parity in Africa. This report tells us that gender inequality in Africa remains high, but the progress towards gender parity seems to be stagnating, and that is of great concern to us in the gender equality field. This means we have a huge missed opportunity to move our countries towards the development that we are all struggling for. Everybody seated around this room is working for an organization in the development field. But, gender inequality is one of those things that we have to grapple with as we try to improve our development indicators. This report shows that if we do nothing, we are going to lose 316 billion dollars; if we do something we’re going to add 316 billion dollars to the GDP of Africa. These 316 billion dollars added to our GDP will happen by 2025. Not so far from now.

That means that we have a lot of work to do in our countries, in MenEngage Africa. MenEngage Africa, we work with men and boys for gender equality. Our role towards advancing the development on the continent can’t be over emphasized. This is because we are on a continent that is patriarchal in nature with all the pillars of patriarchy vibrant and very sustainable, culture, religion; we need to make sure that we increase our efforts to work alongside women’s rights organizations for us to achieve true gender equality. If each country tried to be as good as its neighbours, we would go a long way to achieve gender parity. The McKinsey report tells us that we will take 142 years in Africa to achieve gender equality. The highest country in gender parity according to the report is South Africa with a score of 0.78. The lowest is Niger.

A further analysis of the report shows us that within the MEA members, the highest country where gender parity is somehow good is Namibia and the lowest MEA member is Sierra Leone. Namibia with 0.72, Sierra Leone with 0.50 scores for gender parity. The rest of the MEA countries are somewhere in between, now, even with 0.72 that is quite low! It shows how much we need to do to double our efforts as members who are working with men and boys for gender equality. We need to fast track the process that seems to be stagnating. We need to strengthen our work with women’s rights organizations so that together we move towards fast tracking attainment of gender equality in Africa. Our societies, our countries are losing so much that we can’t afford to see being lost. We need to improve the welfare of our people by doing advocacy around policies, laws, changing attitudes, transforming social and cultural norms across the continent, for us to attain the development, for us to fast track the attainment of the SDGS! 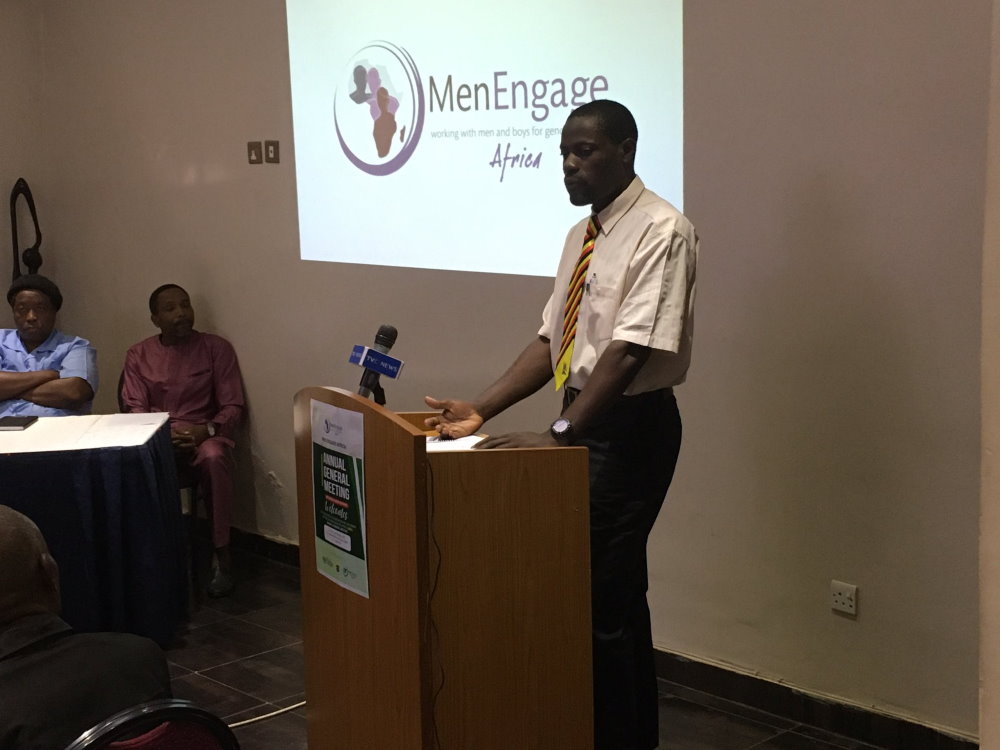 Your excellency, currently running a project funded by SIDA Headquarter called; Accountability towards SDGs and we are doing our level best to fast track and support our countries towards the attainment of the SDGs by doing a lot of advocacy work. For the next two days, we will be putting our heads together to see how we strengthen our governance structure. We are over 350 CSOs under MenEngage Africa, how do we strengthen governance of 350 CSOs? This by the way makes us the biggest regional network in the MenEngage Global Alliance. But, it’s not enough to be happy that we are 350 CSOs working with men and boys for gender equality by the strength of us all is important. We need to ask ourselves, how do we strengthen leadership for work with men and boys? So we will be discussing that and by the end of the two days assembly we will have concrete positions to move us forward and we shall communicate to you and all our stake holders on how we are moving forward towards attaining gender parity .

Colleagues, I would like to conclude here and welcome the MenEngage Global Co-Chair to speak to you.