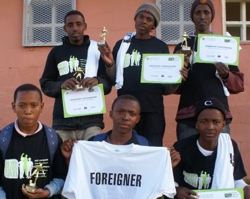 The road towards unifying broken hearts and souls that once delivered hatred can only take stairs and not escalator. It is time-consuming challenge that takes a number of days or even years to re-establish love and implement social change. It only requires fresh strategies to reach to the climax, the society that everybody aspires and campaigns for.

It was drizzling early in the morning in Cape Town; and in its central and southern suburbs heavy rain was pelting to hamper a beginning of a new strategy.

Sonke Gender Justice, a non-profit making organisation whose slogan is “One Man Can” and one of its overriding outlooks is “Halt Xenophobia and support reintegration”, organised a friendly soccer at Manyanani Peace Park in Khayelitsha on Saturday last week.

The purpose of such a project is to promote social unity between the foreign and local communities. Hundreds of young people from diverse places in Cape Town attended the event to witness, mingle, play together and socialise; and so was born a new strategy for social unity.

At least fourteen teams were registered and attended the competition; and each team was composed of two foreigners and two residents including a goal-keeper.

There were no qualifications or pre-requisites as to who would participate to the competition. Even those whose legs and toes are unfit to play soccer are the good footballers required provided their hearts are moulded to social acceptance.

Games were played in a small ground that approximately measured thirty by twenty feet.

A representative of Street Soccer, who also played a major role in sponsoring the event, promised the winning team to line up for 2010 Street Soccer. He said so when presenting certificates, gifts and trophy to the achievers.

The event was so colourful with people from all races (blacks, coloured and whites) all having one core message, “One man can halt xenophobia, stop violence, support reintegration, celebrate diversity, demand justice, and make a difference”.

Entertained by Bonga Magazi and Zoleka Mpotsho, the Chosi-Chosi Poets, young people heard none other than the sole message of peace and social unity that seems to no longer exist between the two communities after xenophobic riots.

While some were busy playing football, others were hilariously dancing. Listening to the euphony of African songs that was technically reported by a man on his wheelchair, Fungile Ngqoleka, everybody was warmed up though the climate seemed not to allow.

Even so, One Man Can; let social unity be promoted by organising strategies of such nature. The road to reintegration and social acceptance can properly be paved if all could engage.