Sonke is pleased to announce that our co-founder and Senior Programmes Specialist, Bafana Khumalo, will be recognised alongside U.S. Vice President Joe Biden, activist and celebrity athlete Donald McPherson, and actor Patrick Stewart for their leadership in pursuing a world free from gender-based violence. The four men will be receiving the inaugural Vital Voices Solidarity Award which recognises men who combat violence against women at an event “Voices of Solidarity” which will be held in New York City on the last day of 16 Days of Activism Against Gender Violence – December 10, 2014, which is also International Human Rights Day. 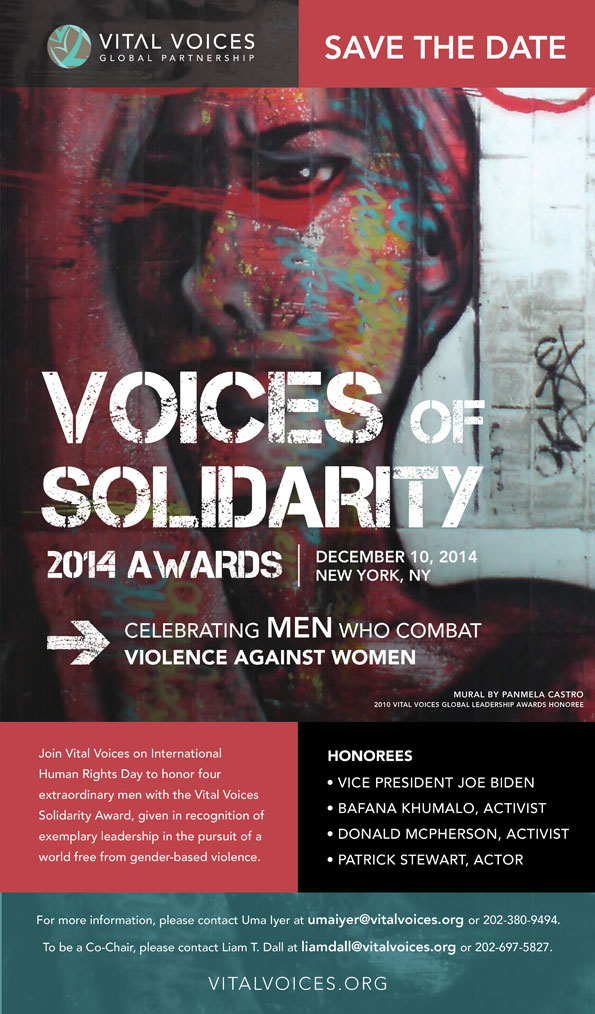 The Vital Voices Solidarity Award acknowledges men who have shown courage and compassion in advocating on behalf of women and girls in the United States and around the world.

The four recipients of the award, given in recognition of exemplary leadership in pursuit of a world free of gender based violence to men who fight for universal equality and a world in which women live free from violence, are:

For more than 17 years, the Vital Voices Global Partnership has collaborated with civil society, the private sector and government to end violence against women. They advocate for effective legislation to ensure the full protection of women’s rights; provide innovative training programs for judges, prosecutors and police; and in conjunction with the U.S. Department of State, offer emergency assistance directly to victims facing extreme acts of gender-based violence around the world.

Bafano Khumalo is Sonke Gender Justice’s Senior Programmes Specialist and one of the organizations’ co-founders. He served as co-director of the organisation from 2006-2010, and as manager of Sonke’s International Programmes Unit and the Policy, Advocacy and Research Unit from 2010-2011. Active in the anti-apartheid struggle, Bafana worked with the Soweto Civic Association and subsequently participated in the peace accords. Bafana has spoken at many national and international conferences on men, gender and HIV/AIDS, including the UN Commission on the Status of Women in 2007, 2008 and 2010, and at the International AIDS Society conference held in Mexico in 2008. He has been published widely in professional journals and appears frequently on radio and television in South Africa. He has both a bachelors and masters degree in theology from the University of Natal. Together with Sonke co-founder and Executive Director Dean Peacock, he was awarded Men’s Health Magazine “Best Man” Award in 2007.