With the support of UNICEF, Sonke and People Opposing Women Abuse (POWA) have started working in the Limpopo town of Musina near the Zimbabwe border to address the very high-levels of violence against women and children (especially migrants) in the area.

Musina is characterised by a huge number of migrants – particularly vulnerable and mobile populations from Zimbabwe, with approximately 1,800-2,000 Zimbabwean asylum seekers crossing the border legally and illegally each day. Girls are particularly vulnerable to sexual abuse and exploitation at border crossings at the hands of immigration officials, soldiers, police and other criminal gangs which roam these areas.

The joint project aims to increase awareness around GBV and HIV, assist survivors of sexual abuse and gender-based violence to have improved access to women-centred, responsive services, and to increase men and boys’ involvement in activities to prevent violence against women and the spread of HIV. The project is also challenging xenophobia, working to strengthen community cohesion and promoting human rights (especially those of migrants and asylum seekers). Sonke is working with men from a number of community groups in Musina to develop their capacity to be advocates and activists in efforts to eliminate violence against women and children, to prevent the spread of HIV and AIDS and to promote health, care and support for orphans and vulnerable children. We will also extend the programme to reach men in the transport industry by working with taxi drivers and truckers in Musina and at the border area.

Other stakeholders working in Musina including Medicines Sans Frontiers (MSF) and Save the Children UK have already started mobilising boys and men living in the streets with the aim to raise public awareness and address issues around water borne diseases, HIV and AIDS and Sexually Transmitted Infections (STIs).

Sonke and POWA are also working to protect the many unaccompanied minors crossing the border from exploitation. This is done through a variety of activities including; working with stakeholders through the organisation of community events, developing educational materials, and engaging in community mobilisation using the arts and other community events to stimulate discussions about human rights and the prevention of GBV. Sonke is specifically working with boys at the URC Boys’ Shelter getting them to share their personal experiences and empowering them to stand up against violence.

Commenting on the importance of working with boys in the area, Vusi Cebekhulu (the One Man Can coordinator working in Musina) notes, “One of the saddening phenomenon in Musina and nearby Beitbridge is that boys who are aged between 12 and 18 are sexually active and already they are indulging in sexual relationships with commercial sex workers.” The levels of sexual activity and unprotected sex in the area are evidenced by the number of STIs reported to and treated by MSF. Vusi also added saying, “A lot of boys are aware of the safer sex methods including condom usage but the socialisation process and peer excitement plays a huge role in their decision making processes”.

When asked, the boys said that “women refuse to use condoms and it’s not easy to think about condoms when the penis is erected”. 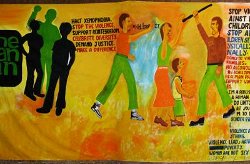 On 25 November, Sonke and POWA unveiled a mural to mark the 16 Days of Activism for No Violence against Women and Children. The mural was designed and painted by the numerous adults and children who have participated in OMC and POWA workshops since September.

The paintings denounce acts of violence against women and children and aim to educate the community about HIV and Aids. The event was held at Eric Louw High School and included a poetry performance by migrant members of the community.

More than 200 community members attended the event, including the Acting Musina municipality manager, Mr Pedro Nndwa and a representative of the Department of Education, Dr N.S Phaswana. 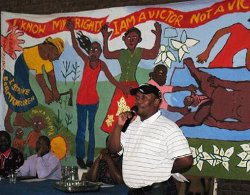 Although the problems in the Musina area are vast, this project has the potential to make a lasting difference in the area. The involvement of government departments and international agencies in the area are strengthening the programme, and comments from participants in the workshops indicate that the attitudes of the men involved are changing: “My dad used to beat my mother and I thought is okay, but today I can see it destroys families.”