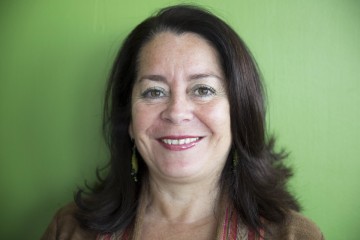 Angelica Pino started her work in the human rights field in Chile in the 80s, while the country was under General Pinochet’s rule. As a Law student, she worked in NGOs conducting human rights education and training among disadvantaged communities. At the time, she also became involved in the incipient feminist and women’s rights movements. Later on, she worked as a lawyer in NGOs providing counselling and legal advice to women survivors of violence, as well as conducting training and research on women and the law. After the democratisation of the country, Angelica joined the Ministry of Justice to work in a Legal Aid Project.

Angelica moved to South Africa in 1994. In 1997, she joined the Nisaa Institute for Women’s Development – a Lenasia based women’s NGO – to become a member of the editorial board of LOLA press, an international magazine and project aimed at promoting exchange among feminist movements globally. Angelica has also worked for the Heinrich Boell Foundation Southern Africa office, the Centre for the Study of Violence and Reconciliation, and Gender Links, managing programmes on gender-based violence. She holds a LLB from the University of Chile and a LLM from the University of the Witwatersrand.

She joined Sonke in June 2010 in the position of Resource Mobilisation Manager and in April 2014, she took the position of Sonke’s Director of Programmes. She is also the convenor on behalf of Sonke of the advanced short human rights course “The Role of Men and Boys in Achieving Gender Equality”, organised annually in partnership with the Centre for Human Rights and the Centre for the Study of AIDS at the University of Pretoria.