It turns out that the way you find people in the rural Eastern Cape is to use the clinics and schools as navigational aids. Every town has a school and sometimes a clinic and so we jump from town to town getting closer to our destination, asking for directions and being pointed to the next school. Once we are in the right town we can start asking for the person by name.

Everyone has been expecting us as we called ahead, and most have been happy to sit patiently and wait for us. I can’t help feeling guilty at turning up 2 or 3 hours late because we have lost our way or places are further than we thought. Perhaps it is normal here, or people are too polite to say anything. I suspect that it goes deeper than that though and is an example of the way that many people in this country have historically been made to undervalue themselves and their time.

Mthobeli Gangathi is 51 years old and lives in Lusikisiki in the Eastern Cape. He has silicosis from working in the gold mines for 16 years. He was paid no compensation for his illness and now runs a small shop from his house, to support his seven children.

On his days off at the mine, if he wanted to go shopping, he could go on the mines bus which stopped at just one shop. They were counted on and off the bus and returned immediately to their hostels.  “At the time we thought it was for our protection” he said “We were worried about being robbed or stabbed as they knew we didn’t get to spend our money often.”

Speaking about the lawsuit he said “I hope to see the owners of the mines compensate us, even if it is not me I hope it will benefit the other ex-miners who are sick with silicosis.”

Zama Gangi, 60, organised traditional dancing competitions when he worked at South Deep Gold Mine. The competitions were usually between different mines and were judged by their supervisors. There were no prizes, it was for fun, pride and to keep their heritage alive.

In 2007 Mr Gangi was diagnosed with silicosis and was told to take his eldest son to replace him. He was retrenched in 2008 after 19 years and was paid no compensation.

Speaking about the dangers of working in the gold mines he said “Most times I would feel sad when I left my family because the working conditions are not good underground. When you are a winch driver you are risking your life. I had fears of leaving them behind in case I died on the mines… I worried I would never see them again.”

Zaneyezi Ntloni lives in Flagstaff in the Eastern Cape. He is 59 years old and started working in the gold mines when he was 16 years old. He stayed for 34 years and worked as a machine operator. He was diagnosed with TB and silicosis and told to send his eldest son to replace him. When his son arrived, Zaneyezi was sent home with no compensation.

“I loved my job so much” he said “ I was able to support my family, especially my wife and children. That is what I was thinking about all the time I was working.”

Zwelengaba Mgidi spent all of his free time training to be a boxer while he was working at Harmony Gold Mine. He fought under the name “Fix” and would train after work during the week and compete at the weekends. Now he says that he cannot even walk to the gate in his garden without getting out of breath. He is 55 years old and has silicosis.

These two just happened to be hanging out in the shop as I was photographing Mthobeli Gangatha, they didn’t seem at all surprised when I swung the light around and asked if I could photograph them as well. 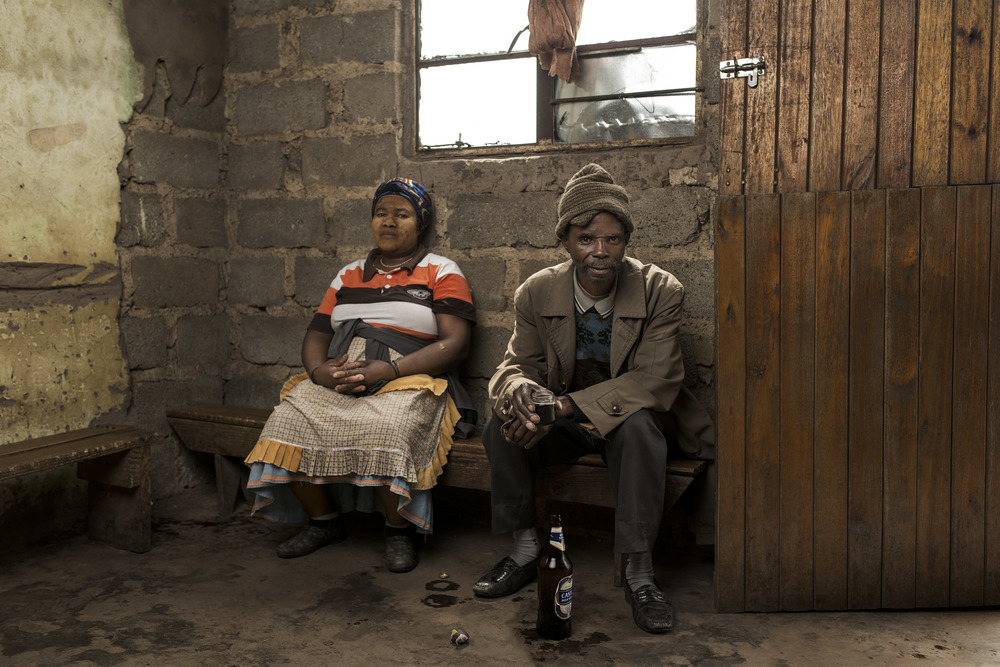