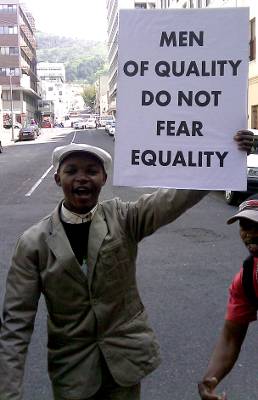 Julius Malema has withdrawn his appeal and made a public apology to “all women” for the statements he made.

Sonke has welcomed Malema’s apology but has noted with concern the fact that it has taken him 15 months to comply with the court ruling. Malema has said that he will shortly pay the R50 000 fine.

Malema’s lawyers have announced their intention to appeal Magistrate Collis’s ruling. Meanwhile, Malema has been very quiet about the verdict, not having appeared in court and telling reporters “I am not interested. I am not going to comment on that”.

The Equality Court found Julius Malema guilty of hate speech and harassment in the case brought against him by Sonke Gender Justice regarding his comments about rape survivors. He has been ordered to make an unconditional public apology within two weeks and to pay R50 000 to a centre for abused women within one month.

Sonke has released a video on the Equality Court case against Julius Malema.

Closing arguments were made in the Equality Court case against Julius Malema and the Magistrate reserved judgement on the matter, with the date for the ruling to be handed down still to be confirmed.

Malema was scheduled to present his defence in the Equality Court. However, his lawyers failed to file their heads of argument on time, and thus the case was postponed to 24 November 2009. This will be the final hearing before judgement is handed down.

Malema took the stand in the Equality court case in defence of his comments. He told Sonke’s lawyer that he had been referring to the judgement in the Zuma rape case but that because he only has a matric level education, he could not quote the judgement verbatim.

The Equality Court reconvened to continue the Malema hearing which Malema has applied to have dismissed. Sonke staff again demonstrated outside the courts in both Johannesburg and Cape Town to demand that leaders be held accountable for their statements and to call on men to take responsibility.

Sonke appeared in the Johannesburg Equality Court and held simultaneous demonstrations there and outside the Cape Town High Court. Regardless of the outcome of this case, the publicity around this case has made it clear that public officials can be held accountable for statements that demean rape survivors and pander to misogyny and toxic masculinities.

Congratulations to Mbuyiselo Botha for his tenacity under hours of intense questioning by Malema’s lawyer. And thanks to our many partner organisations who demonstrated on the streets with us, including One in Nine partner organisations, the CGE, TAC, the Women’s Legal Centre, Olive Leaf Foundation and men from various One Man Can community groups.

For media coverage of the court case and demonstration, visit:

>> Read the IOL article: Mantashe fails to save Malema from court

Malema told the Cape Times that he was not even aware of the “hate speech” complaint laid against him. “I don’t know about this. Let those people who want publicity go to court because they won’t find me there. I don’t have time for this,” he said.

The case has been postponed while Sonke obtains legal advice. Sonke is concerned that at the first appearance of this matter before the court, Julius Malema did not appear in person. Malema’s legal counsel argued that the statements made were “fair comment”.

Sonke staff member Mbuyiselo Botha has taken the Malema matter to the Equality Court. He is asking the court to force Malema to apologies for the comments he made and that he be stopped from making further comments that “undermine women’s dignity”.

Sonke Gender Justice issued a press statement condemning Malema’s remarks and called on the ANC leadership to set the record straight by sanctioning Malema and by demonstrating unequivocally their commitment to gender equality and to preventing gender based violence as spelt out in ANC and government policies.

While addressing 150 Cape Peninsula University of Technology students Julius Malema, ANC Youth League president, suggested that the woman who accused ANC president Jacob Zuma of rape had a “nice time” with him and said, “when a woman didn’t enjoy it, she leaves early in the morning. Those who had a nice time will wait until the sun comes out, request breakfast and ask for taxi money.”