The report presents findings from an evaluation of the MenCare 50:50 programme implemented through educational sessions with men and couples to promote gender equality in homes and improve overall family well-being. This is with the aim of promoting positive and equitable empowerment for women, and improvement in the caring of children. Implementors were trained on […] 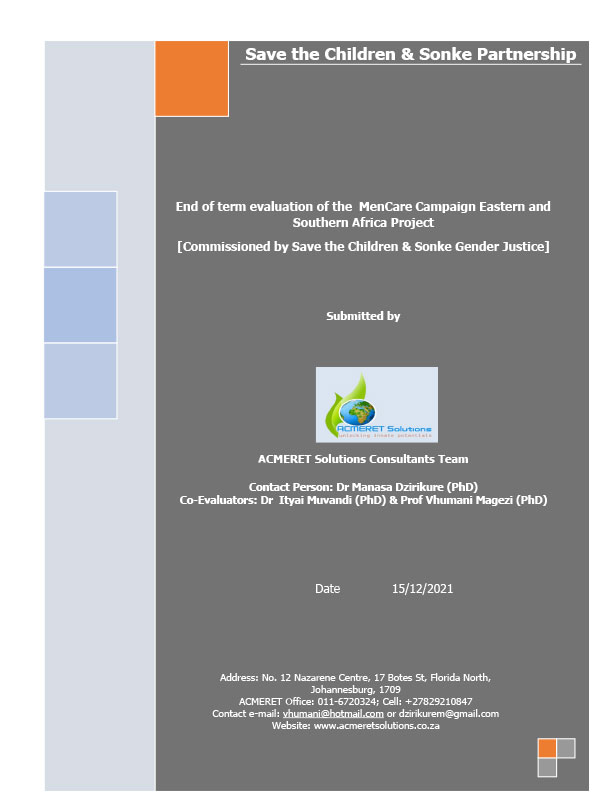 This report presents findings of the end of term evaluation of the MenCare Campaign Eastern and Southern Africa Project commissioned by Save the Children & Sonke Gender Justice. The project was implemented in six Sub-Saharan African countries, namely Ethiopia, Kenya, Mozambique, Tanzania, Zambia and Zanzibar. The project has been implemented since 2017 and will end […] 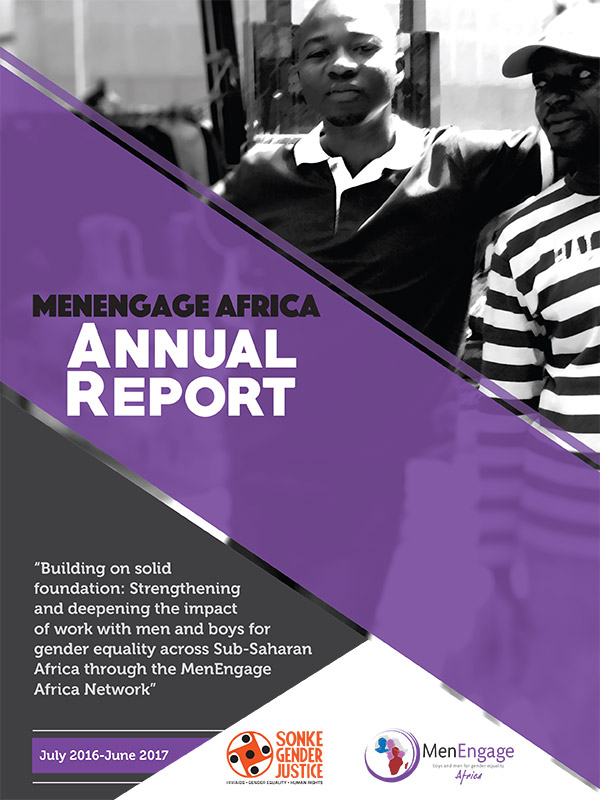 MenEngage Africa (MEA) – which was formed out of a global initiative, the MenEngage Alliance, in 2008 – has grown from its base in the Southern African Development Community (SADC) region to Central and East Africa and now into the Francophone West African countries. To date, the network is operating in 22 countries – with […] 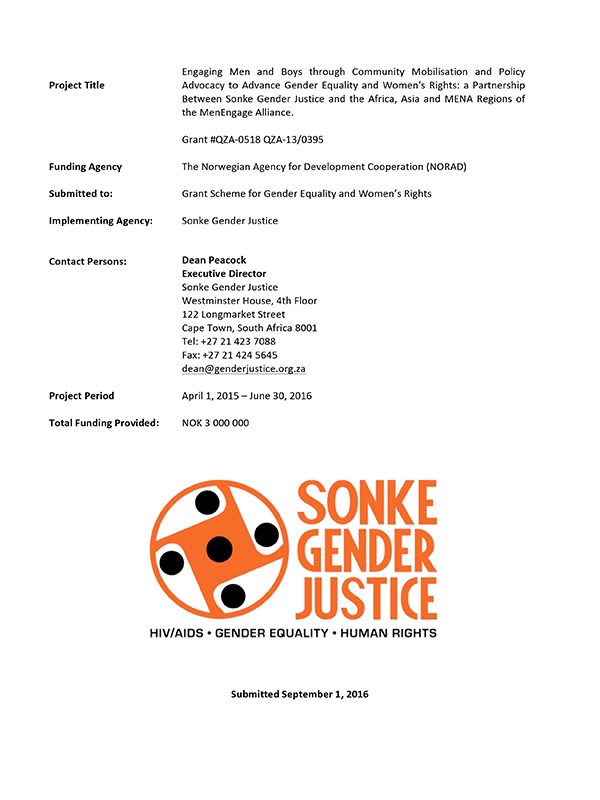 Sonke and MenEngage Report to Norad 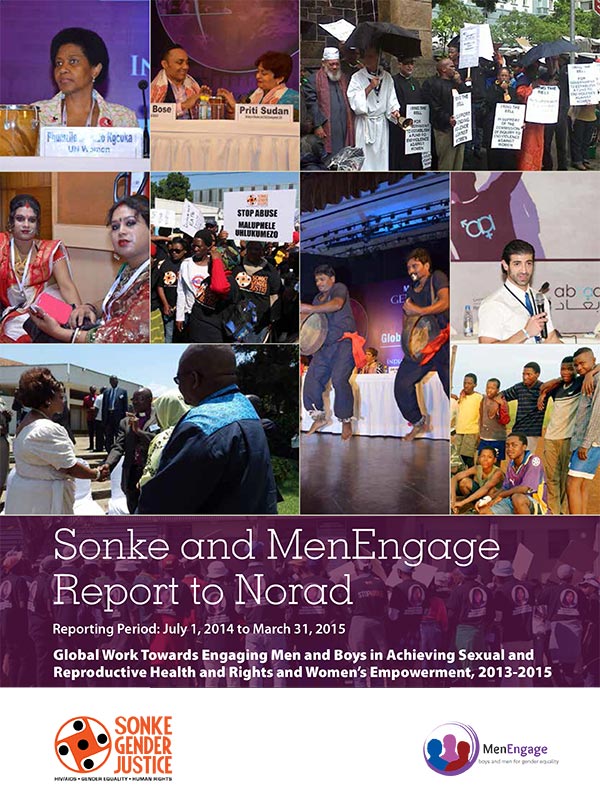 During this final reporting period, Sonke and the MenEngage Alliance have successfully achieved the three objectives we were funded to pursue: Building the operational and programmatic capacity and sustainability of both Sonke Gender Justice in South Africa and MenEngage networks at the national, regional and global levels so that they can better increase men’s involvement […]

Sonke Gender Justice, SECTION27 and Treatment Action Campaign to Demand Justice for Miners and their Families Affected by Silicosis in the Case of Bongani Nkala & Others v Harmony Gold Mining Company & Others 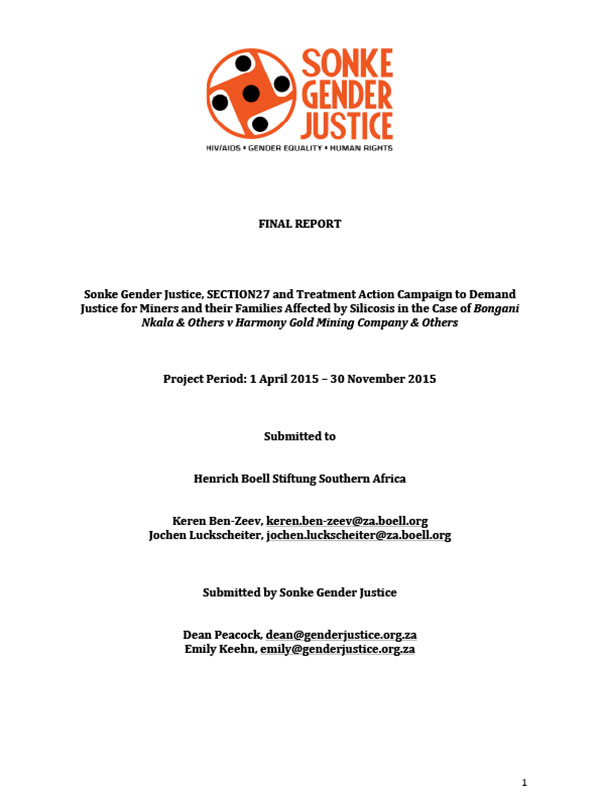 Sonke Gender Justice (Sonke), the Treatment Action Campaign (TAC), and SECTION27 worked collaboratively on this project to conduct media advocacy, research and documentation to raise awareness on silicosis and tuberculosis (TB) in the gold mines of South Africa, as well as to support the class action lawsuit by applying to be amici curiae in the […] 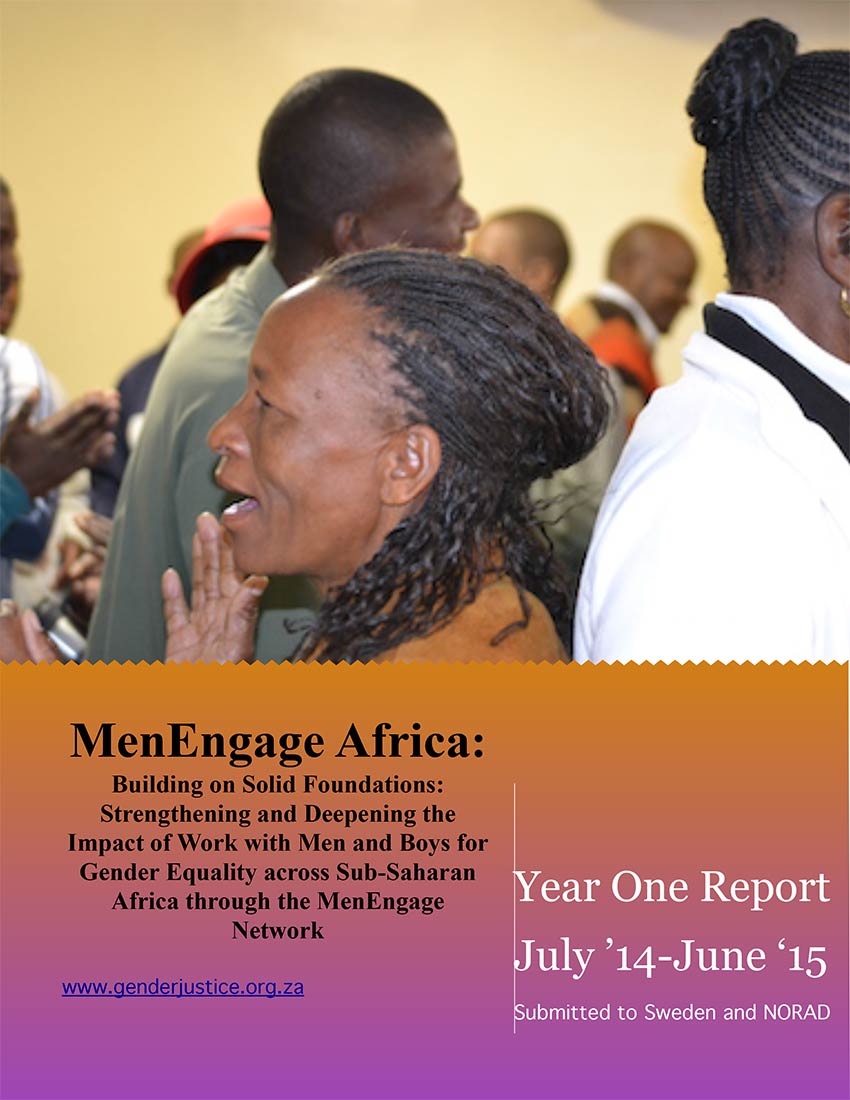 This report provides an overview of all the work done by the MenEngage Africa network under the guidance of Sonke’s International Programmes and Networks (IPN) unit to strengthen and deepen the work done with boys and men to promote gender equality in sub-Saharan Africa between July 2014 and June 2015. The work reported herein is […]

MenEngage Africa: Increasing the Scale and Impact of Work with Men and Boys for Gender Equality across Sub-Saharan Africa through the MenEngage Network 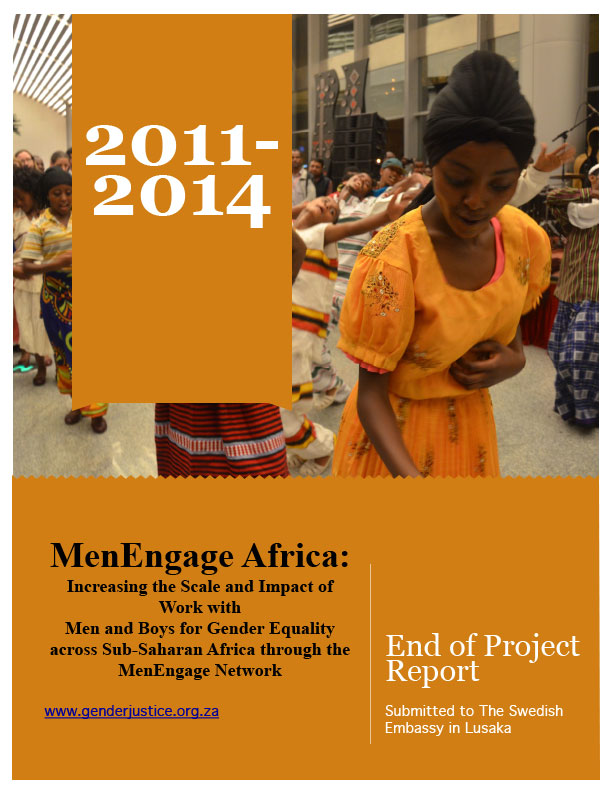 Sonke, through the MenEngage Africa alliance, implemented the project to strengthen work with men and boys for gender equality in the region for three years from 2011 to 2014. In 2011 when the project was initiated, it sought to address the gap that existed between advances made in providing responses to gender-based violence, and interventions […]

Sonke and MenEngage Report to NORAD 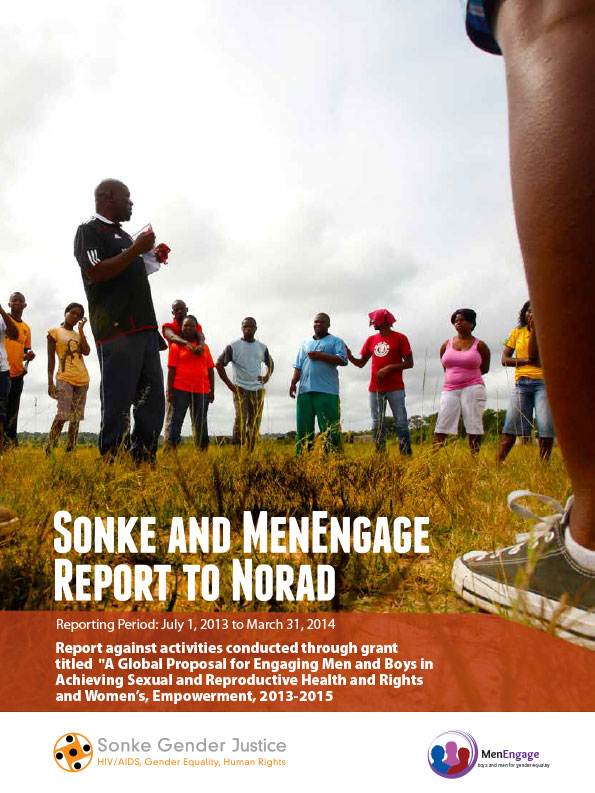 Sonke and the MenEngage Alliance have made enormous progress against the three objectives they were funded to pursue by NORAD: Building the operational and programmatic capacity and sustainability of both Sonke Gender Justice in South Africa and MenEngage networks at the national, regional and global levels so that they can better increase men’s involvement in preventing […] 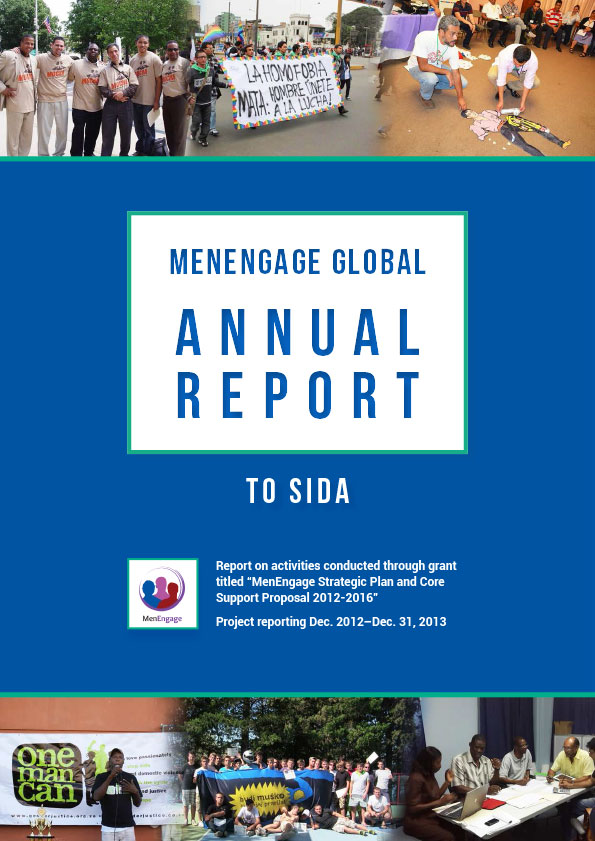 This report is a snapshot of the key achievements and deliverables against the first year of the MenEngage strategic plan agreed upon by SIDA and Sonke. It is structured around the four result areas of the project, with a separate section for the regional reports. Under each area, activities are presented, followed by key results. […] 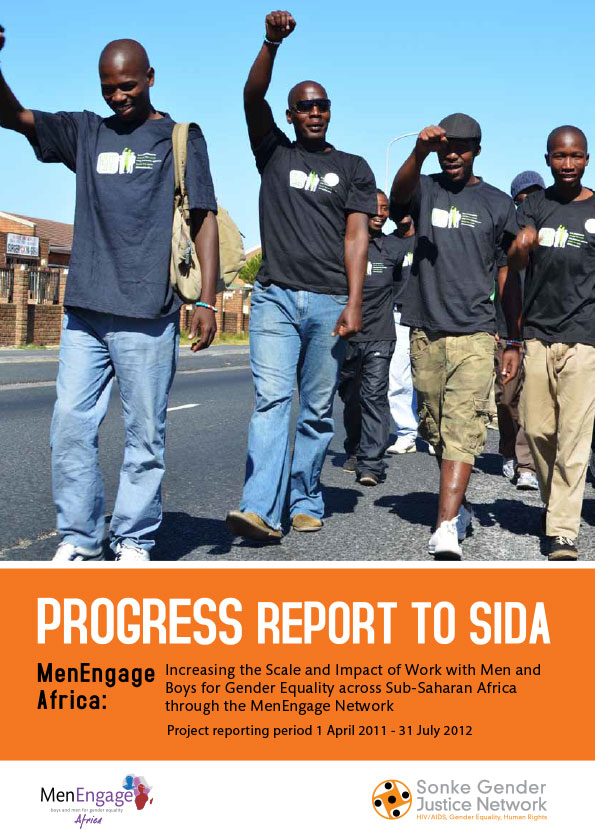 With the aim of effectively scaling-up work with men and boys to promote gender equality, prevent gender-based violence (GBV) and the sexual exploitation of children, and reduce the spread and impact of HIV and AIDS across Sub-Saharan Africa, Sonke on behalf of the MenEngage Africa network, coordinates this Sida-funded project in order to work towards […] 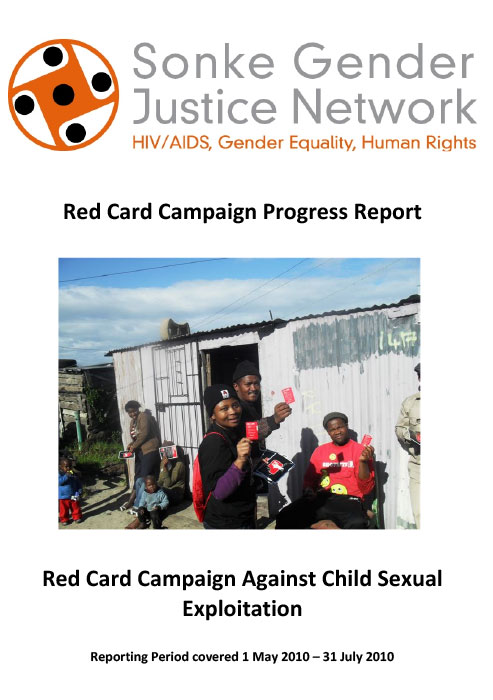 On 9 June 2010, just days before the launch of the World Cup, Sonke officially launched the Red Card Campaign against Child Sexual Exploitation. The campaign was activated in a number of sites across Johannesburg and the Western Cape, with additional activities taking place in Port Elizabeth. In essence, the campaign seeks to reduce children, […]

This project built on Sonke’s proven experience in working with men to develop a unique and effective model for mainstreaming men into the care economy, in line with South African national plans addressing gender-based violence, halting the spread of HIV/AIDS and providing for orphans and vulnerable children. The report that follows describes and chronicles in […]

Engaging men to reduce violence against women and children, prevent the spread of HIV/AIDS and promote health, care and support to orphans and vulnerable children in Nkandla, KwaZulu-Natal and Mhlontlo, Eastern Cape: Phase II 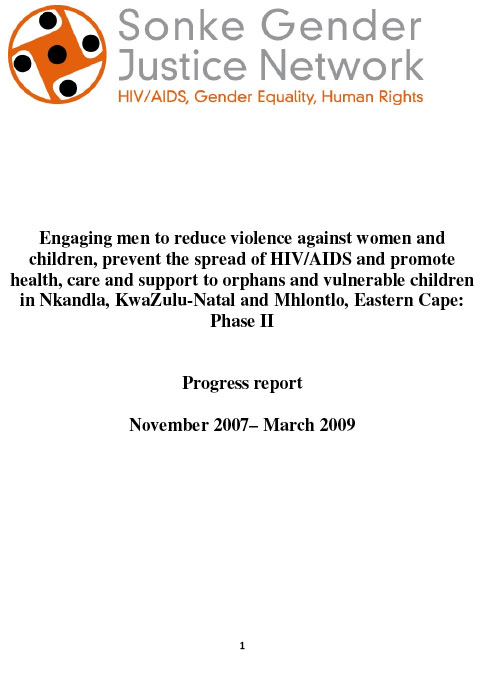 Since November 2006, Sonke has implemented a ground-breaking two-phased ‘demonstration’ project on gender and parenting in 2 municipalities in rural KwaZulu-Natal and the Eastern Cape with funding from UNICEF. The project was carried out in two sites where violence levels are high – Nkandla, KwaZulu-Natal, and OR Tambo, Eastern Cape. Phase I of the project […]