An equity-based approach to dealing with the Covid-19 pandemic 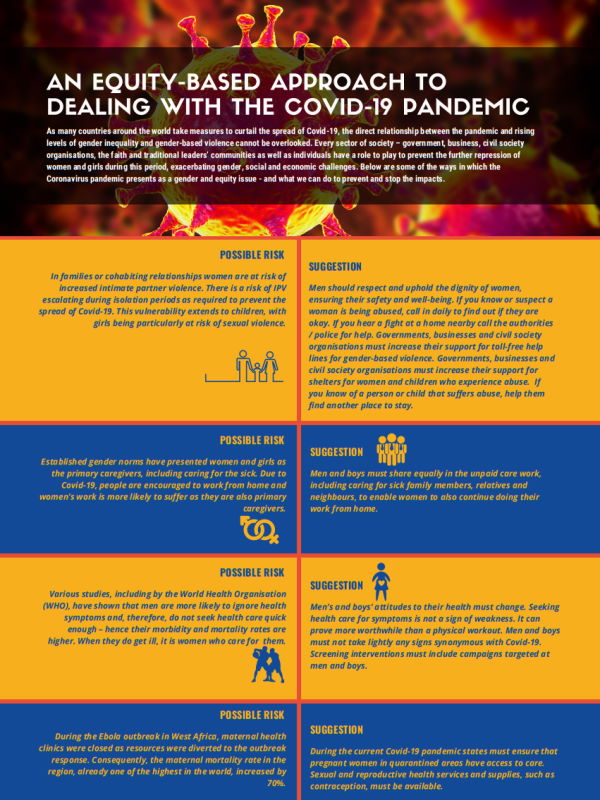 As many countries around the world take measures to curtail the spread of Covid-19, the direct relationship between the pandemic and rising levels of gender inequality and gender-based violence cannot be overlooked. Every sector of society – government, business, civil society organisations, the faith and traditional leaders’ communities as well as individuals have a role […] 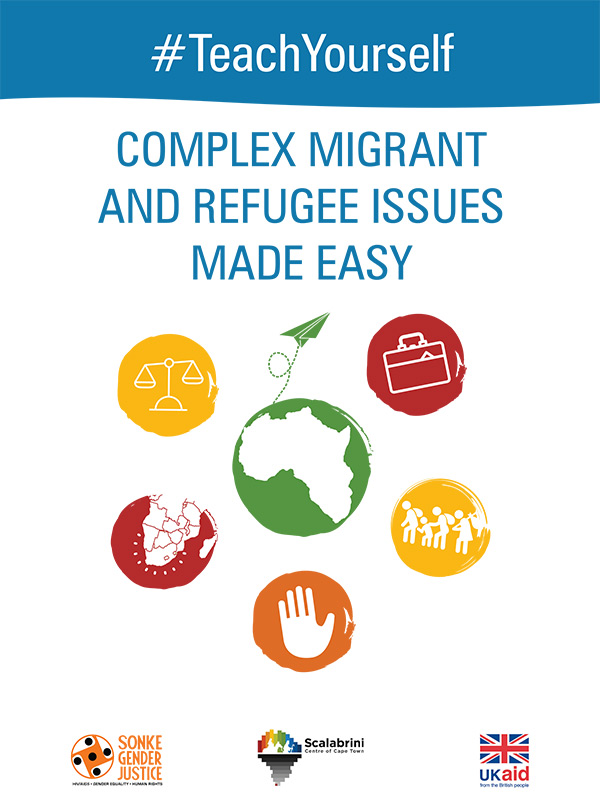 The #TeachYourself Series are condensed articles on current and planned changes in South African migration law. Our articles and infographics aim to spread awareness on South Africa’s migration landscape, and our standpoints on these issues. This booklet contains information on the Refugee Act, Refugee Amendment Act, the White Paper on International Migration, birth registration of […] 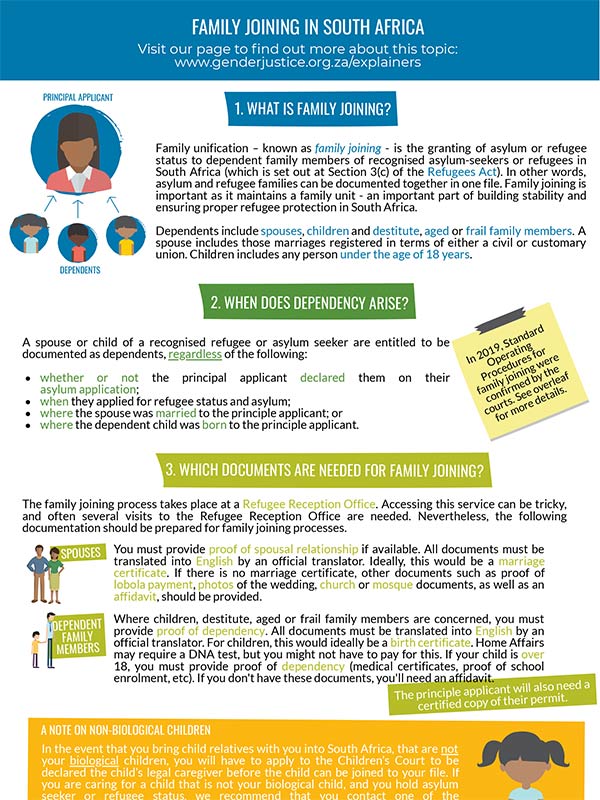 Family unification – known as family joining – is the granting of asylum or refugee status to dependent family members of recognised asylum-seekers or refugees in South Africa (which is set out at Section 3(c) of the Refugees Act). In other words, asylum and refugee families can be documented together in one file. Family joining […] 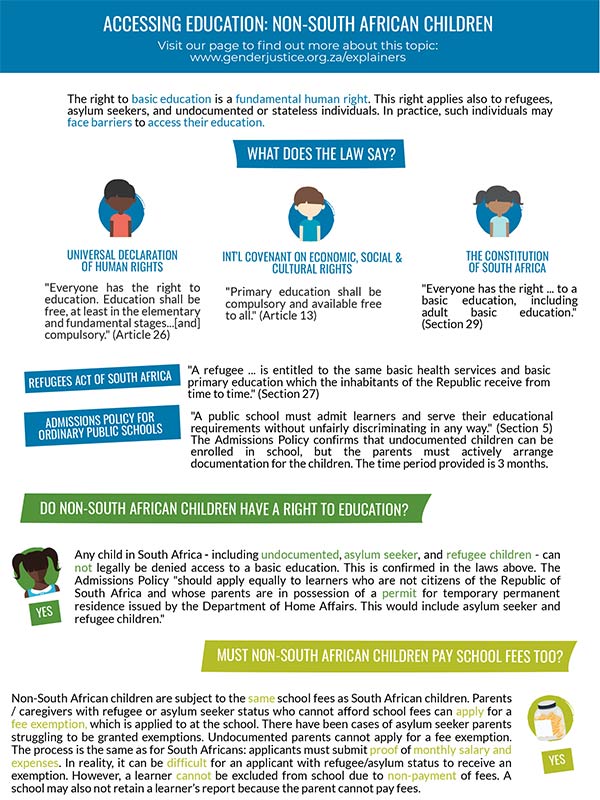 The right to basic education is a fundamental human right. This right applies also to refugees, asylum seekers, and undocumented or stateless individuals. In practice, such individuals may face barriers to access their education. 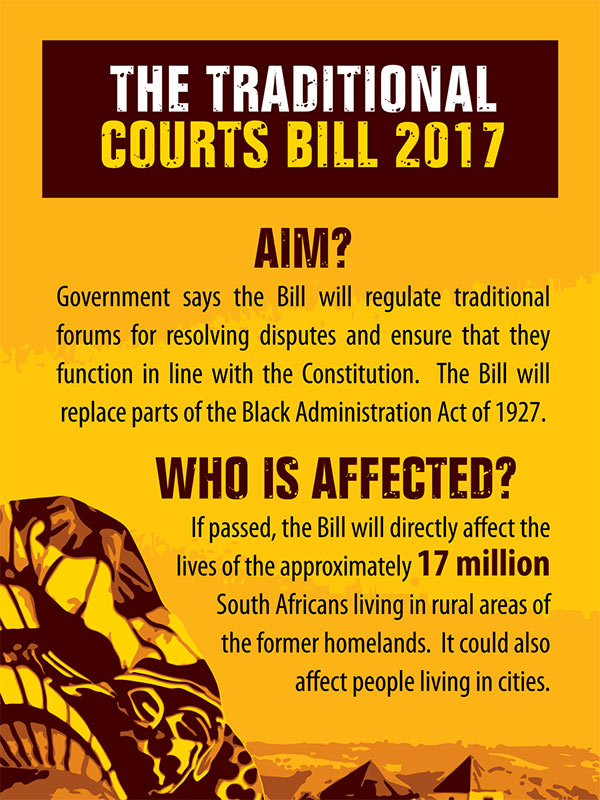 The Bill threatens to force rural South Africans into a separate justice system! 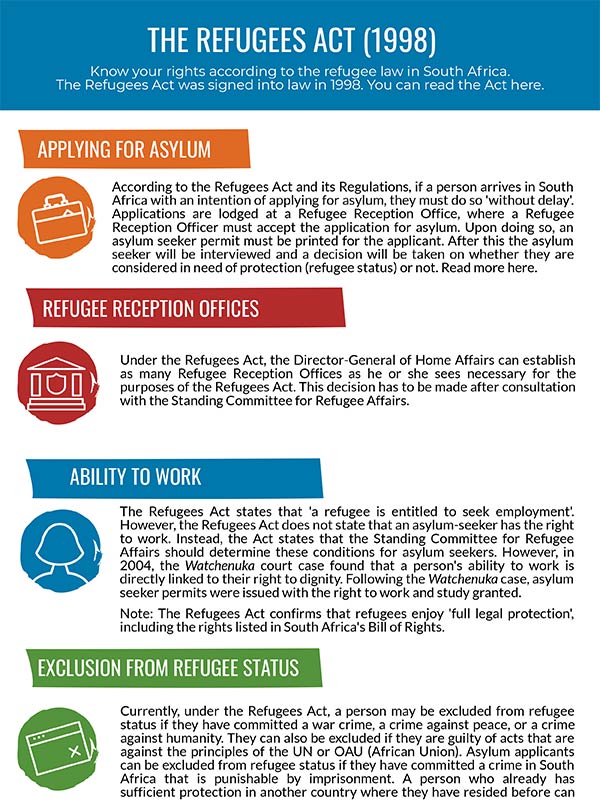 Know your rights according to the refugee law in South Africa. The Refugees Act was signed into law in 1998. You can read the Act here. 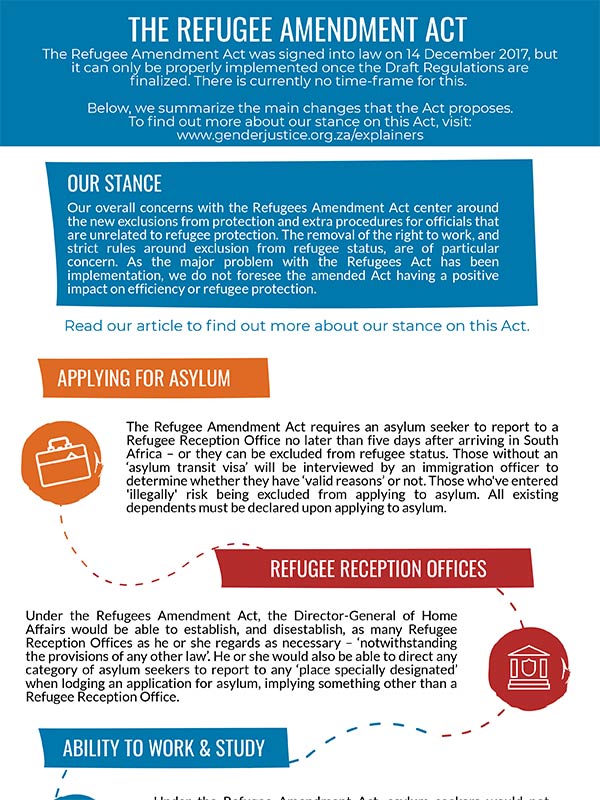 The Refugee Amendment Act was signed into law on 14 December 2017, but it can only be properly implemented once the Draft Regulations are finalized. There is currently no time-frame for this. 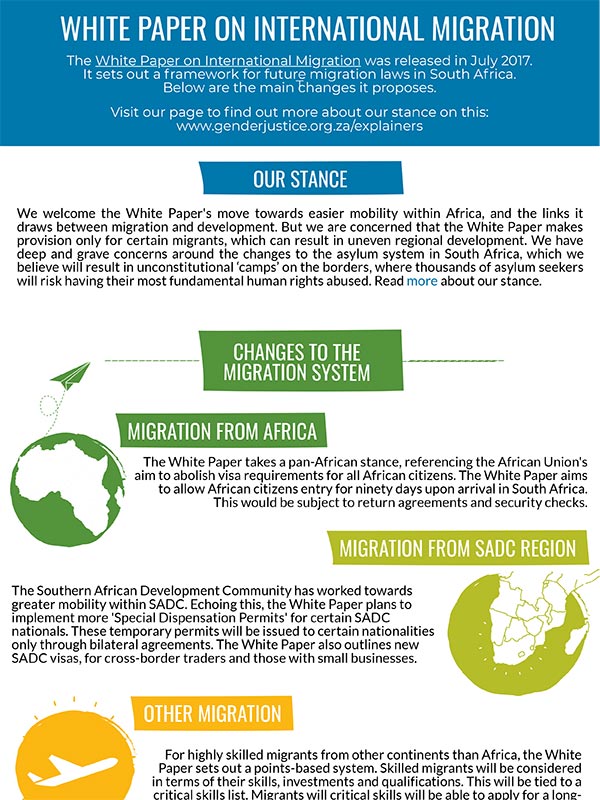 The White Paper on International Migration was released in July 2017. It sets out a framework for future migration laws in South Africa. 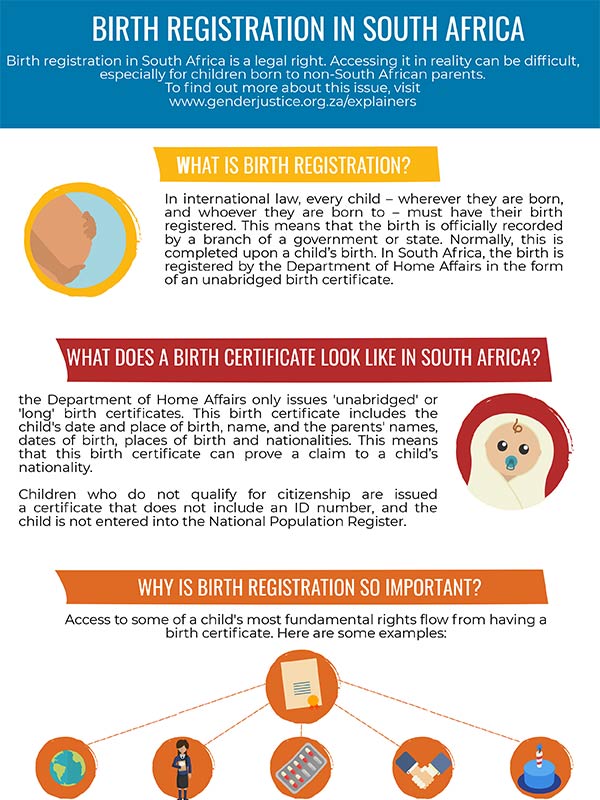 Birth registration in South Africa is a legal right. Accessing it in reality can be difficult, especially for children born to non-South African parents. 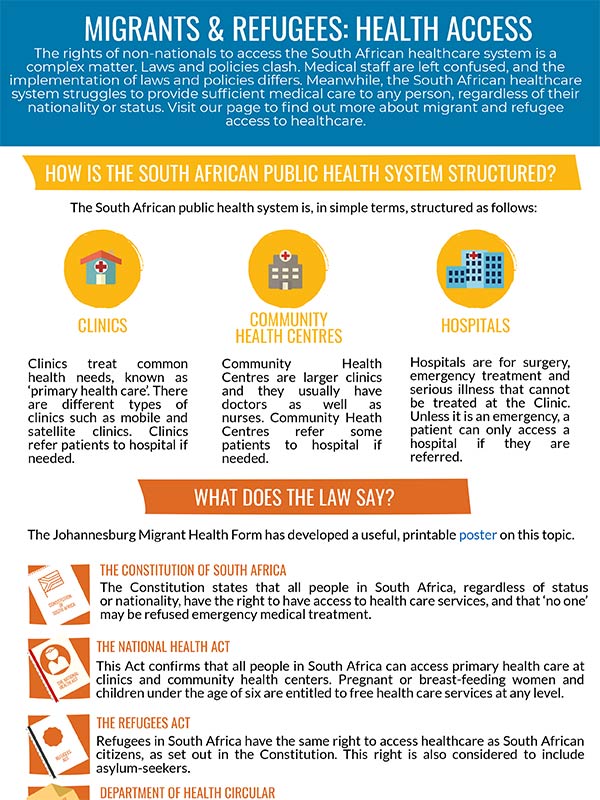 The rights of non-nationals to access the South African healthcare system is a complex matter. Laws and policies clash. Medical staff are left confused, and the implementation of laws and policies differs. Meanwhile, the South African healthcare system struggles to provide sufficient medical care to any person, regardless of their nationality or status. 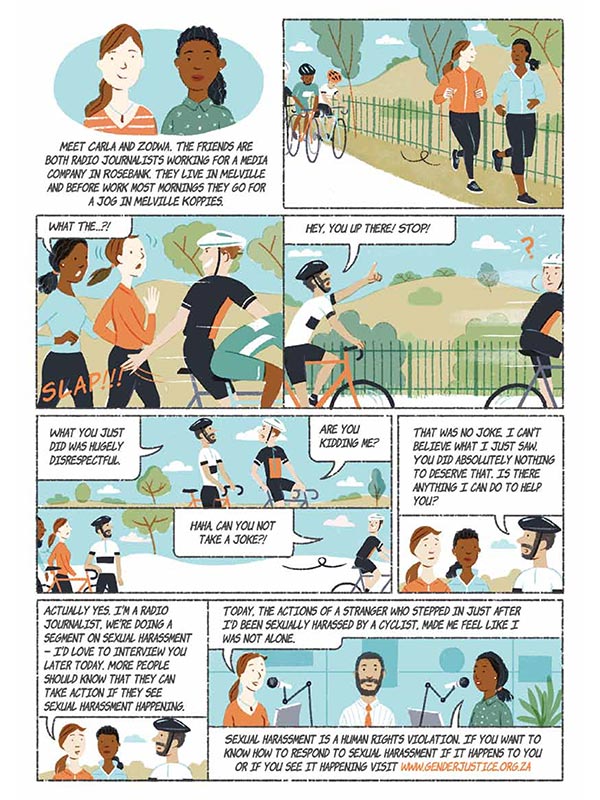 The second in our series is based in Johannesburg and illustrates how no space – not even going for a casual jog – is free of sexual harassment. Read the first in our series of comic strips showing how pervasive sexual harassment is the lives of women in South Africa, or read an article about the movement […] 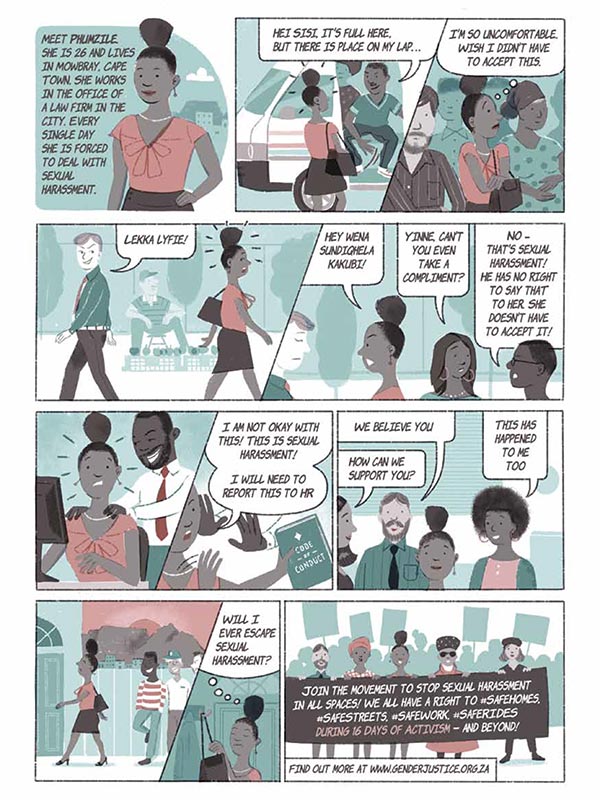 Pastoral Care and the LGBT Community 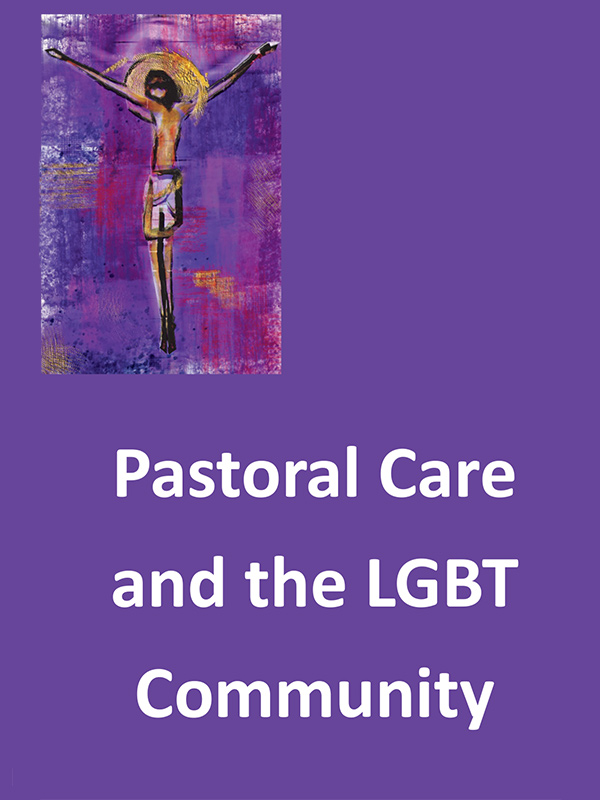 This pamphlet is designed to help faith leaders to provide pastoral care to the LGBT Community by raising awareness on stressful and difficult issues that the LGBT community within their families and faith communities.

The Bible and the LGBT Community 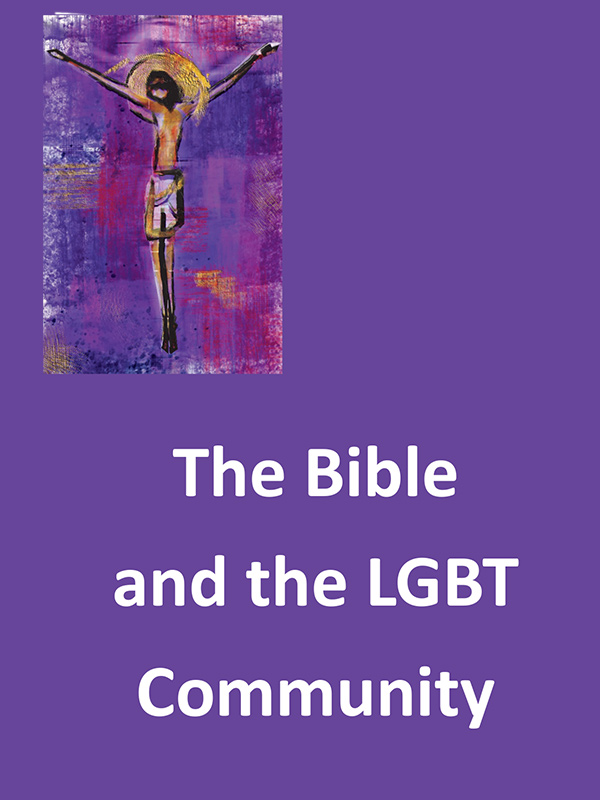 This pamphlet interrogates several scriptures that are often used in either promoting or disapproving of homosexuality. It also reflects on what the church can do to create conversations on areas around LGBT.

Faith Communities and the LGBT Community 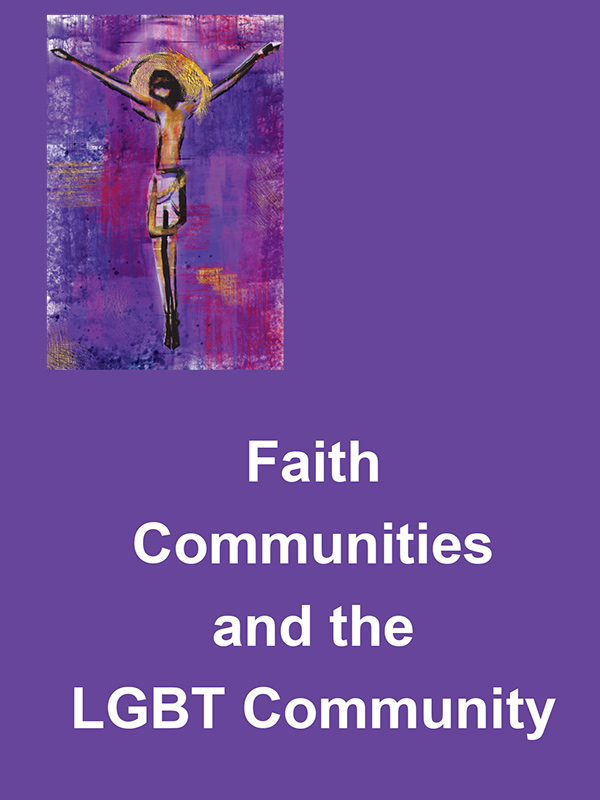 This pamphlet reflects on the role that the church can play in ensuring safe spaces for the LGBT community, their families and friends as well as answering questions that often surround homosexuality seen as a sin. 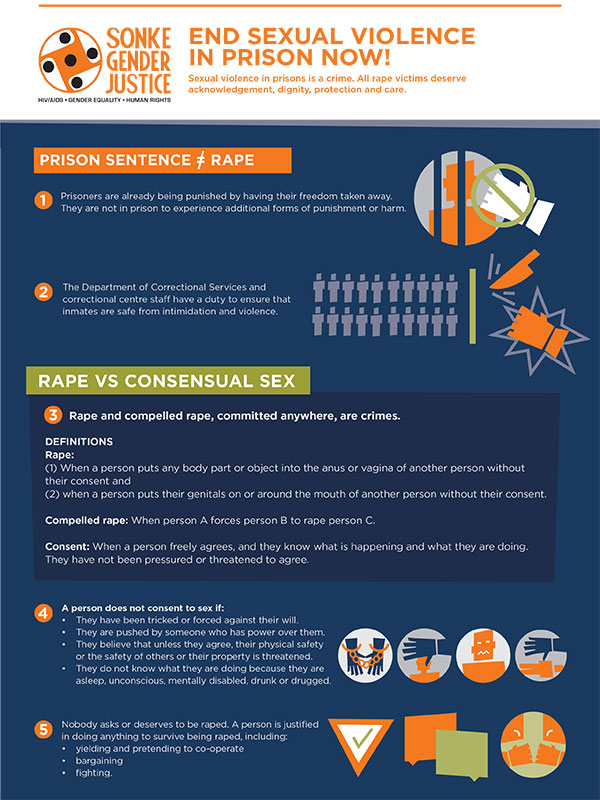 Sexual violence in prisons is a crime. All rape victims deserve acknowledgement, dignity, protection and care.

I wish I had known 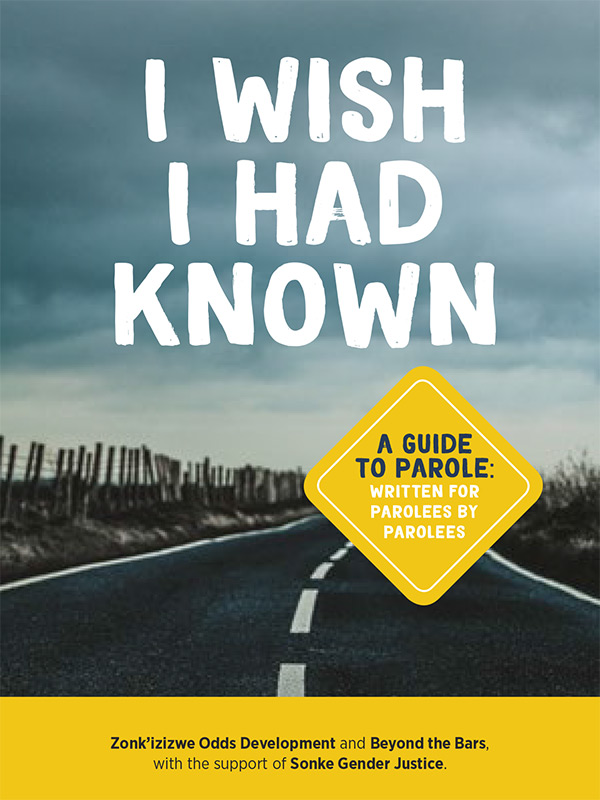 In 2018, Zonk’izizwe Odds Development (ZOD) and Beyond the Bars, with the support of Sonke Gender Justice, developed a reentry guide targeting pre- and post-release parolees, to provide support for adjustment to life immediately after prison. The guide essentially provides the following: a description of parole and when one may qualify for it (with an […]

I wish I had known – Afrikaans 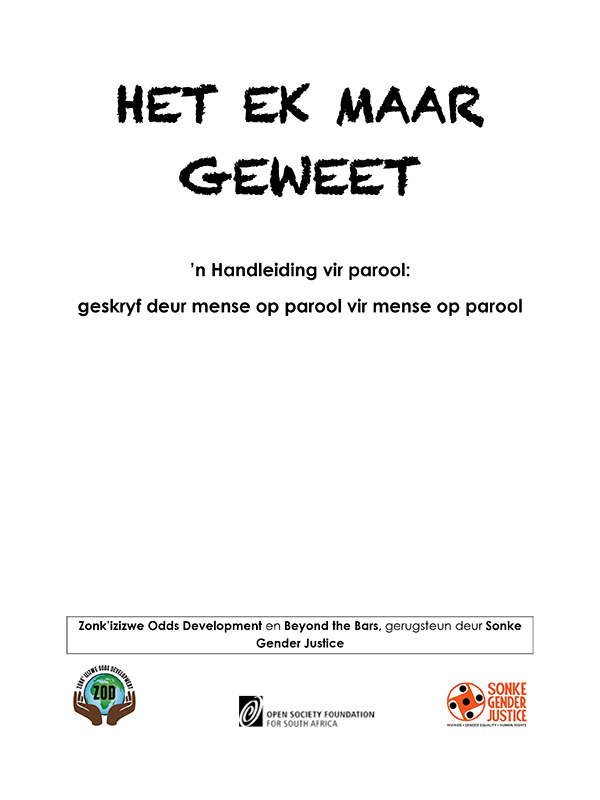 I wish I had known – Zulu 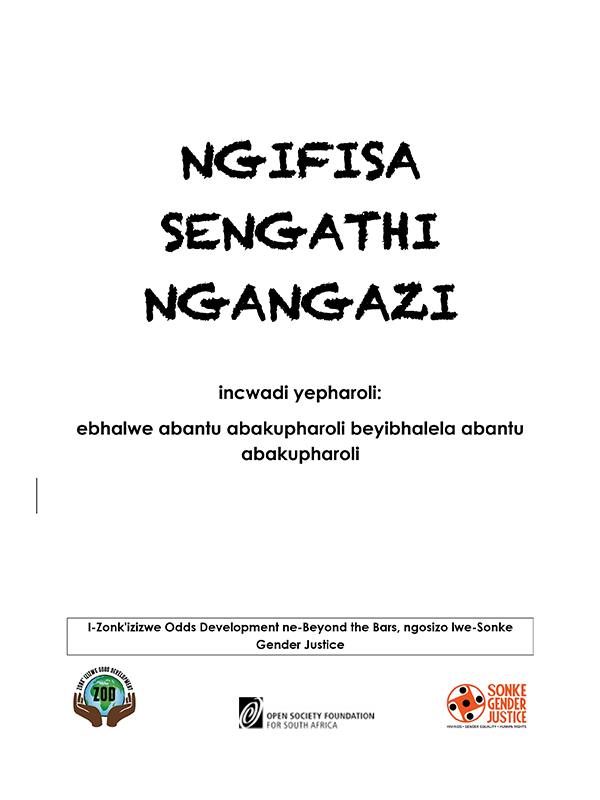 Did you know that the water crisis affects women more than men? 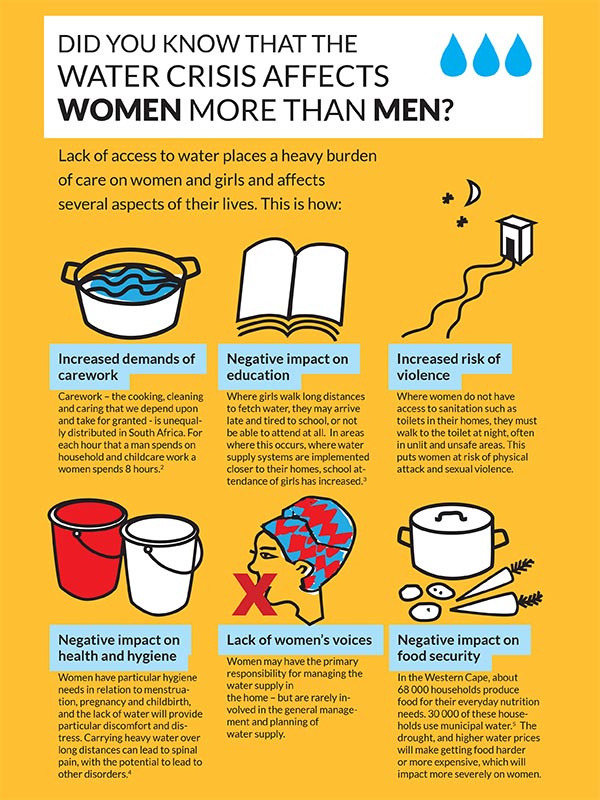 At the time of writing, Day Zero has been pushed back to July 2018. At Sonke, we’ve been supporting on-going measures to mitigate the drought and its social effects, and we are actively playing our part to assist in this crisis. Below, we detail how water and gender are inextricably linked – and we suggest […]

‘Our strength is not for hurting’ 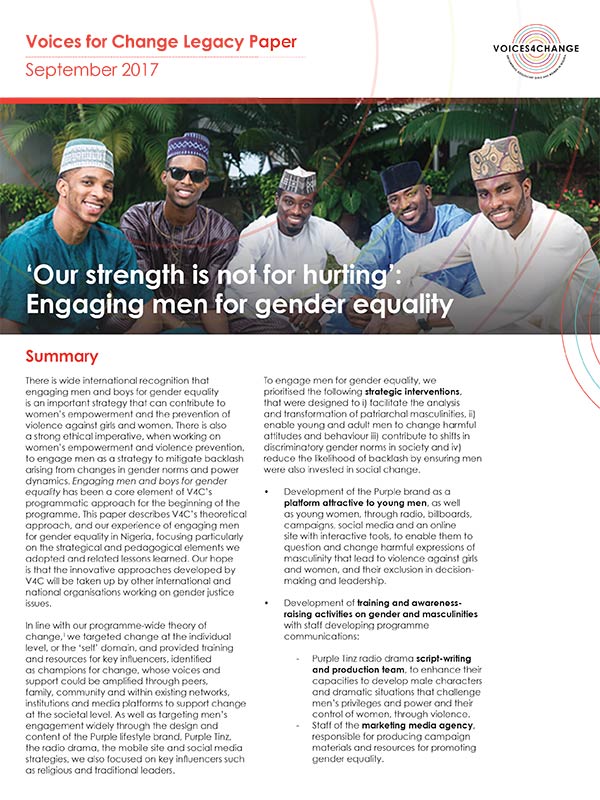 Sonke is excited to share the report produced by Voices for Change documenting their experience of engaging men for gender equality in Nigeria, focusing particularly on the strategical and pedagogical elements adopted and related lessons learned. Voices for Change targeted change at the individual level, or the ‘self’ domain, and provided training and resources for […]

10 reasons to focus on improving the HIV response for men 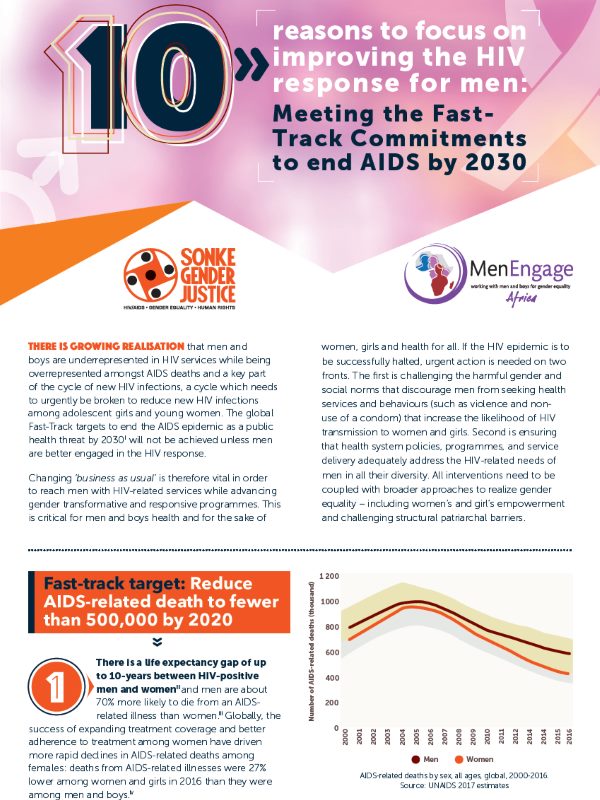 There is a growing realisation that men and boys are underrepresented in HIV services while being overrepresented amongst AIDS deaths and a key part of the cycle of new HIV infections, a cycle which needs to urgently be broken to reduce new HIV infections among adolescent girls and young women. The global Fast-Track targets to […] 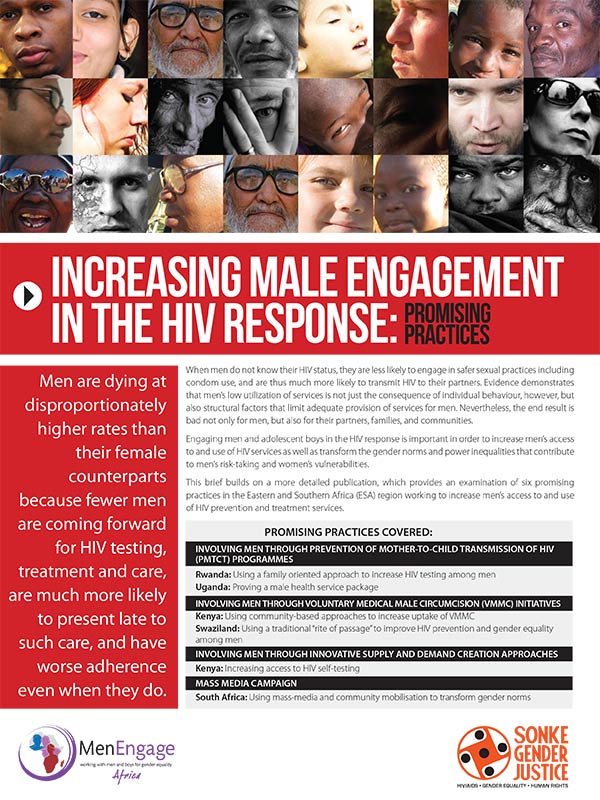 Men are dying at disproportionately higher rates than their female counterparts because fewer men are coming forward for HIV testing, treatment and care, are much more likely to present late to such care, and have worse adherence even when they do. 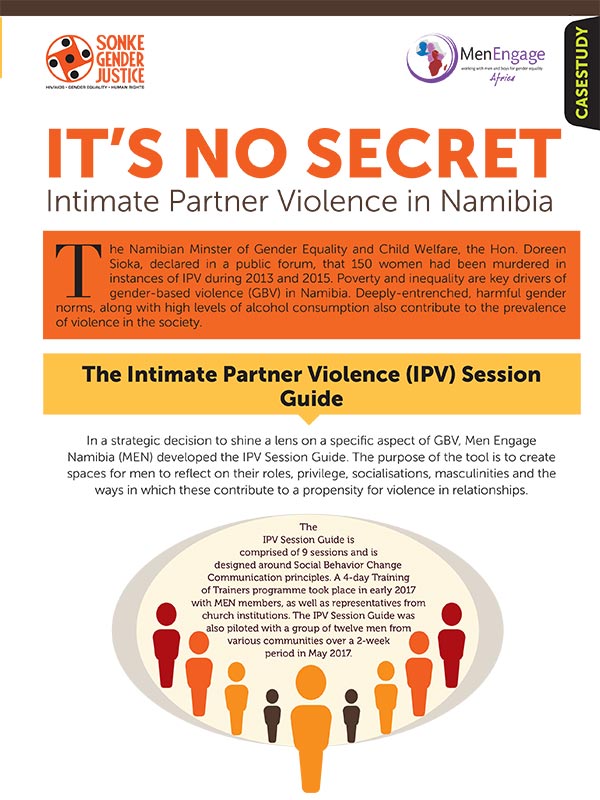 The Namibian Minster of Gender Equality and Child Welfare, the Hon. Doreen Sioka, declared in a public forum, that 150 women had been murdered in instances of IPV during 2013 and 2015. Poverty and inequality are key drivers of gender-based violence (GBV) in Namibia. Deeply-entrenched, harmful gender norms, along with high levels of alcohol consumption […]