A world in which womxn, children, men, and gender-non-conforming individuals
enjoy equitable, caring, healthy, and happy relationships that contribute to the
development of gender-just and democratic societies, free from poverty.

Sonke strengthens the capacity of governments, civil society, and citizens to
advance gender justice and womxn’s rights, prevent gender-based violence and
reduce the spread of HIV and the impact of AIDS, and in this way contribute to
social justice and the elimination of poverty.

Sonke recognises that effecting sustained change to gender roles and relations requires addressing the forces that shape individual attitudes and community norms and practices – traditions and cultures, government policies, laws and institutions, civil society organisations, the media and the family – as well as underlying economic, political and social pressures.

Effective responses to gender-based violence and HIV and AIDS require organisations to develop multifaceted strategies and build relationships with both traditional and non-traditional partners. Thus Sonke works closely with a range of organisations and individuals including women’s rights organisations, social movements, trade unions, government departments, sports associations, faith-based organisations, media organisations, university research units and human rights advocates. In addition, Sonke is committed to ensuring that programmes are informed by the perspectives and priorities of those working to advance the rights of lesbian, gay, bisexual, transsexual and intersexual communities, people living with HIV and AIDS, and refugees and migrants. Women, sexual minorities, young people, refugees, migrants and other relevant stakeholders are represented in Sonke’s governance structures.

Sonke recognises the importance of engaged and empowered citizen activism that can both support and hold government accountable. Sonke currently co-chairs the MenEngage Alliance, and embraces the principles of the Alliance to guide the positive involvement of men in gender equality work.

Sonke utilises the ‘spectrum of change’ model, drawing on a broad range of social change strategies that include:

The Spectrum of Change: A Tool for Integrated Public Health Approaches (99.58 kB) 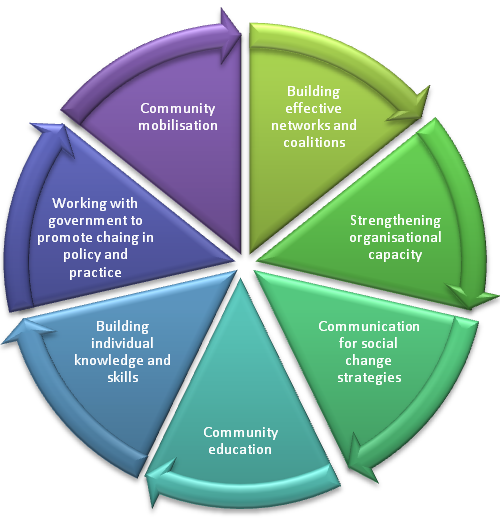 Sonke believes that our gender transformational work must:

On 1 December 2017, Sonke was awarded the Mail & Guardian Investing in the Future and Drivers of Change Health Award for our prison reform work.

According to Dean Peacock, Co-Founder and Co-Executive Director of Sonke, “These awards are testimony to both the effectiveness of multi-pronged and ambitious strategy and a dedicated staff willing to stay the course over the long term no matter the challenges.”

In November 2012, Sonke was listed as a runner-up in the Mail & Guardian 2012 Investing in the Future Awards for our One Man Can Campaign. We were also a runner-up in the Interpersonal/Community Category at the 2012 AfriComNet Awards for Excellence in HIV and AIDS Communication in Africa.

In January 2012 Sonke was recognised by the French National Consultative Commission on Human Rights as one of six “distinguished” organisations out of 160 applicants. As a young organisation – established only in 2006 – Sonke was proud to be mentioned alongside organisations that are recognised globally for their pioneering work.

Also in January 2012, Sonke was recognised by Philanthropedia as one of the top-performing organisations working globally to end violence against women. The recognition was created by a global survey of 80 experts from 60 NGOs, research institutions and philanthropic organisations.

In 2007, founders and directors of Sonke, Dean Peacock and Bafana Khumalo won the Men’s Health Best Man Award in the Public Service category. The award recognised the two men’s efforts to halt the spread of HIV and AIDS and to stop all forms of gender-based violence in South Africa.

In a speech on 13 October 2011 in which he outlined the UK Government’s development priorities, the Department for International Development’s parliamentary representative, Stephen O’Brien, applauded the work of Sonke’s One Man Can campaign and voiced his support for the need to work with men and boys to promote gender equality.

Recognitions for Promising or Best Practice