“So we are ATM fathers”: A study of absent fathers in Johannesburg

The Centre for Social Development in Africa (CSDA) and Sonke Gender Justice set out to speak to fathers who are not living with their children, have little contact with them and/or seldom provide them with money. The research project did not seek to promote a particular form of family. Instead, the research sought to contribute to a broader understanding of the impact of absenteeism in fatherhood. It should be noted that the research was deliberately exploratory, used a very small sample of men, and was intended to influence the formulation of further research.

The focus group discussions drew absent fathers from Alexandra (North Johannesburg), Tembisa (Johannesburg East Rand), Doornkop (Soweto) and Devland (Soweto). The majority of participants were under the age of 35 years and were unemployed. 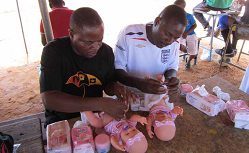 Sonke operates from the premise that responsible fatherhood is beneficial to the development of children and to building families and societies that better reflect the principles of gender equity and protect child rights. Around the world, work related to care giving is predominantly carried out by women and girls, and thus efforts for the increased involvement of fathers in caring for their children constitute a significant contribution to the advancement of gender equality. Caring fatherhood is also beneficial to fathers themselves. However, a father’s physical presence alone is not necessarily a desirable outcome in itself and father presence can also be negative in some cases, as when it is characterised by abusive conduct.

Gender equal parenting implies not just material contribution from fathers. It has to do with lessening the inordinate physical, financial and emotional load that mothers in absentee father homes have to bear. Thus although this study focuses on absentee fathers, with a view to understanding the phenomenon, the feelings and views of mothers raising their children without fathers serve as an impetus for the work.

The presence of responsible, caring and supportive fathers however, can have hugely positive effects on children, families and society.

Participants saw themselves, and felt as if they are perceived by their female partners and their families, primarily as providers. One father referred to the social pressure generated by the primacy of the provider role as follows: “whether you are unemployed or employed, you must provide”.

The participants also articulated that an unemployed father who is unable to provide for his family sees himself as emasculated and unable to fully assume the role of being a father.

Participants additionally cited financial constraints related to ilobola and damages (in order to claim the right to access one’s child born out of wedlock, certain African practices require the father to pay “damages” (fines) as reparation for having offended or disrespected the female partner’s family. In such cases, if the father fails to honor this, he is technically not recognised as the child’s father).

“Whether you are unemployed or employed, you must provide” study participant.

A number of participants reported that they either withdrew from their child’s life or had been barred from seeing their child, against their will, by the child’s mother, or her family, as a result of being unable to conform to material provider expectations specifically due to being unemployed. Whether or not this is indeed true, it is important to recognise the power of this perception.

The study demonstrated that an overemphasis on the material nature of the provider role makes it difficult for alternative father roles, beyond being a provider, to develop and be promoted. The fact that alternative means of caring for children are not expected of fathers, and often rejected by fathers themselves due to being perceived as un-masculine, can cause fathers to feel that they have nothing to offer if they are unable to provide financially. This can result in the opportunity of engaging responsible fathers, whose presence and care would have benefited the lives of their children, being missed.