December 1, 2011 is an enormously significant date for all South Africans. On that day, World AIDS Day, the South African National AIDS Council (SANAC) will launch the new and finalized 2012-2016 National Strategic Plan for HIV, STIs and TB, which has been developed over the last year. The plan has ambitious goals, including the reduction of new HIV infections by at least 50% using combination prevention approaches; and getting at least 80% of eligible patients on antiretroviral treatment (ART), with 70% alive and on treatment five years after initiation. 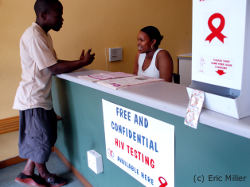 At Sonke we work to engage men and boys in, amongst other things, achieving gender equality and addressing the gender dimensions of HIV and AIDS. For us, the new NSP represents a breakthrough: it recognizes that greater efforts need to be made to engage men in HIV services and it makes clear that doing so is in the interests of women, men and the public health system.

In South Africa, and in fact across the world, men are chronically underrepresented in HIV services, as they are in health services more generally. For instance, results from South Africa’s recent national HIV testing campaign reveal that men made up only 30% of the nearly 13 million people who got tested. Men also access HIV treatment later than women and often eventually access services with severely compromised immune systems. In South Africa, about 55% of those living with HIV are women but more than two-thirds of patients receiving public sector ART are female. Once on treatment men are more likely than women to interrupt treatment; to be lost to follow-up; and to die while on treatment.

This is bad for men, women and health systems in general. When men fail to access health services it often means that women have to carry the heavy burden of caring for them while they are ill. When men do access clinic and hospital services, it is often with advanced AIDS related illnesses and very low CD4 counts. This makes it difficult and expensive to treat them – and people who start treatment with low CD4 counts have worse outcomes, including higher mortality levels. This affects women in a more direct way, as they grieve for the unnecessary deaths of the men they cared about and loved: their husbands, partners, brothers, fathers, sons, friends and co-workers.

A recent article entitled “Men and antiretroviral therapy in Africa: our blind spot” by Morna Cornell, James McIntyre and Landon Myers in the Journal of Tropical Medicine and International Health makes the case that South Africa’s 2007 – 2011 National Strategic Plan does not “identify male access as a gap or include plans to address it”. An article in The Lancet titled Expanding HIV care in Africa: making men matter” reaches a similar conclusion: “encouraging men to get tested and into treatment is a major challenge, but one that is poorly recognised… Addressing these issues effectively means moving beyond laying blame, and starting to develop interventions to encourage uptake of prevention, testing, and treatment for men – for everyone’s sake.”

Globally this problem is not given much attention in NSPs or in donor plans and priorities. Sonke has conducted a global scan of NSPs from 16 countries on five continents, as well as a regional policy scan analyzing the NSPs from 13 countries in Southern and East Africa. The scans revealed that generally, within NSPs, men are most often mentioned in relation to Medical Male Circumcision, Men who have Sex with Men, and sometimes in Prevention of Mother to Child Transmission plans, but NSPs hardly ever emphasize the need to increase men’s uptake of testing and treatment services, or the potential to encourage men to support their peers to do the same. Cornell, McIntyre and Myer make the point that despite evidence of gender inequity in access to ART, “most international and national ART-related policies and programmes in Africa are still blind to men… Nowhere in the UNAIDS epidemic updates or country progress reports is men’s access to ART identified as a gap and prioritized for urgent action… PEPFAR does not identify men’s access to ART as an issue requiring action… The Global Fund for HIV⁄AIDS, TB & Malaria’s comprehensive strategy document on gender equality and HIV⁄AIDS fails to identify gender inequity in access to ART.”

This lack of attention to men’s low utilization of HIV services needs to change. Exciting new research findings show that if people access treatment early, it improves their long-term health outcomes and radically decreases the likelihood that they will pass on the virus. However, “treatment as prevention”, as it is now being called, will only be effective on a population level if far larger numbers of men know their status and get on treatment earlier than is currently the case.

In order to affect men’s uptake of testing and treatment services we need to address men’s poor health seeking behaviour, which is in part caused by the masculine gender norm which equates illness with weakness, and weakness with emasculation. However, Ford, Mills and Mugyenyi, in their Lancet article, emphasize that we must not forget that men are also afforded few opportunities to enter the health-system, in contrast to women who are offered the opportunity through antenatal care services. Thus getting men involved in HIV services needs holistic and integrated interventions. Sonke has been working to raise this issue, both nationally and globally. Nationally we’ve worked with, and through, SANAC to ensure that language which engages with men is included within the NSP. We’re glad that the following language, which names the problem, has been incorporated within the 2012-2016 final NSP document:

We are even more glad that language which outlines concrete solutions was included such as:

We congratulate SANAC and the Department of Health for their work on the NSP and acknowledge the commitment and effort of the SANAC Men’s Sector, of which Sonke serves as the secretariat. In this capacity Sonke produced detailed submissions in response to each draft of the NSP, often under incredibly tight deadlines. We were concerned at certain points that this critical issue of engaging with men would be neglected within the NSP, under the pressure of the diverse and multiple interests of the varying SANAC sectors. We are thus relieved and delighted to see the good language that has been incorporated into the final draft. Managing the many competing demands of nearly 20 SANAC sectors could not have been easy and we commend the writing team for their hard work.

Our work is not over however, and the real work, as such, begins now, in earnest, as the NSP is launched on 1 December, World AIDS Day. The plan then needs to be translated into an Operational Plan by March 24th, alongside nine Provincial Strategic Plans and then ultimately many more District Strategic Plans. One of the failings of our last NSP was that it was not sufficiently engaged with at the provincial and district level; very few of the Provincial or Local AIDS Councils ever really functioned for very long. This will need to change.

As civil society we will work with national, provincial and local government to support the roll-out of the NSP at each of these three levels, as well as assisting as far as we can with the development of the Men’s Sector Operational Plan, the PSPs and DSPs. We also plan to develop a guide to the NSP, to assist with implementation, emphasizing how people on the ground can work to engage men in meaningful ways, in order to move towards achieving the goals of the NSP. When necessary we will apply pressure and call for accountability. As Sonke, we will pay particular attention to three key issues: 1) whether implementation engages men to promote women’s rights and to address the gender inequalities driving the HIV epidemic, 2) whether campaigns are rolled out to address gender norms and notions of manhood that put pressure on men to engage in risky practices in order to demonstrate their masculinity, such as drinking, having multiple sexual partners and dominating women, and 3) whether implementation enables and supports men to improve their use of critical HIV services, especially testing; early uptake of, and adherence to, treatment; and medical male circumcision.

We are excited about the next five years and believe that if we can deliver on the ambitious commitments included in the new NSP we really can break the back of this epidemic. By the time we get to 2016, we expect that, as a country, we will have achieved the NSP’s goals of dramatically reducing new HIV and TB infections, radically improving access for those who need treatment and, critically, of ensuring better health outcomes and reduced mortality for those on treatment.

South Africa’s long-term vision plan is to ensure that within 20 years there are Zero new HIV and TB infections, Zero deaths associated with HIV and TB and Zero discrimination related to HIV and TB. What we achieve in the next five years will determine whether we can achieve that. There can be no doubt that we need to.