Men and Gender Equality: Between the Urgency and the Confusion

“In the Folger Shakespeare Library in Washington, DC, there is a collection of manuscripts and folios written by and for midwives in 17th Century Elizabethan England. They include the herbal remedies and treatments of ailments of the time that were passed from midwife to midwife. One of them is a matter-­of-­fact description of how to help a pregnant woman not to miscarry after being kicked in the abdomen by her drunken husband. This is described in naturalistic terms as if this is simply what some men do.” 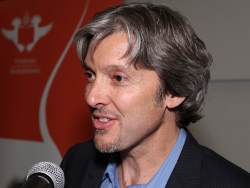 With this shocking piece of historical information, Dr Barker captured from the beginning the attention of the 250 plus audience of students, lecturers, NGO workers, gender and human rights activists who flocked to the modern UJ FADA Auditorium during Women’s Month to hear about ‘the other half’ and their role in promoting gender equality. Among the guests, we could see Ms Zanele Mbeki and the Ambassador of Brasil in South Africa.

Dr Barker, who shared how he has always been inspired by the courage and audacity he finds in every visit to the country, also indicated that he has learned to be cautious in his observations and that ”South Africa is not for beginners.” It certainly is not. Fast forward from 17th Century England to 21st Century South Africa… Research published in 2003 by M. Mbokota and J. Moodley showed that thirty­ five per cent of women attending antenatal services at public hospitals in Durban stated that they were abused during their current pregnancy.

So, is it a case of ‘the more things change, the more they stay the same?’ Not quite. Although Dr Barker related very personal experiences of violence that have made him wonder how far how we have actually come from the 17th Century, he also acknowledged significant advances towards gender equality. He reckoned that, “there is a new generation of boys and girls in many countries who have gone to school together, who may (in some settings but clearly not all) see each other as equals and who have increasingly seen their mothers carry out activities – in particular, working outside the home and contributing to household income – that used to be considered the purview of men.” However, he was clear in acknowledging that gender equality is not a done deal and much remains to be achieved.

Instituto Promundo, Dr Barker’s organisation, recently coordinated a global study called the International Men and Gender Equality Survey (IMAGES), a study that includes six countries so far (Brazil, Chile, India, Mexico, Rwanda and Croatia), and has sister studies in South Africa and Norway. Quoting from IMAGES, Dr Barker provided a picture of men’s views and feelings about gender equality and the challenges in terms of policies and interventions. According to IMAGES, men support gender equality in the abstract, but react negatively to concrete change. The study found that 87-90 per cent of men in all six countries agreed that “men do not lose out when women’s rights are promoted.” However, when asked if they support quotas and other concrete affirmative action policies for women to increase their participation in politics, education and the workplace, men’s support dropped in the range of 40-­74%. Most worryingly, men (regardless of reporting having used violence against a partner or not) were overwhelmingly against or opposed to current laws that make it illegal for men to use violence against a female partner, at rejection rates from 70% to above 90%. In relation to the IMAGES data, Dr Barker wondered whether men might react differently to women’s empowerment initiatives and gender equality policies if they were approached differently, if they could see something in it for them. He suggested for instance that interventions should take a closer look at data from studies on men’s participation as fathers showing that men’s participation in responsive, non-­violent ways in families and as caregivers is good for men themselves.

Dr Barker’s lecture also touched on the very sensitive issue of how poverty plays out in gendered ways in the lives of women and men. He argued that the two largest poverty alleviation initiatives in the world today – microcredit and conditional cash transfers – do not know what to do with poor men, and argued that if we are to tackle structural issues at the core of violence, we must acknowledge the reality and plight of poor men as a gendered issue.

At a policy level, Dr Barker argued that our policies, our social institutions, have not found a way to associate caring and caregiving with men and to value them as roles for men, and that we still measure manhood by achievement, by income, by being a provider. He concluded by stating that if we want men to become non-violent, to become caring, to become empathetic, to treat women with the respect they deserve, we must show empathy toward men. But this does not mean forgiving individual men’s violence. The only pathway to sustainable, structural gender equality is supporting the full rights of women and supporting the roles of both men and women as equal caregivers and providers and affirming that equality of roles and rights in all relevant public policies and the social institutions where these social norms and patterns are created and affirmed.

The lecture provoked heated reactions among the audience: young men nodding vigorously to show their approval during the lecture, gender activists stating ‘convincing but not convinced’, among others. What is clear is that the title of the lecture could not be more apt in a broader sense: there is still confusion regarding the meaning and significance of engaging men and boys for gender transformation, and for the same reason there is an urgency to deepen the debate and activism that should lead to structural gender transformation… with men’s participation.

Dr Gary Barker is the director of Instituto Promundo, member of the Network of Men Leaders advising UN Secretary General Ban Ki-­moon on the UN’s UNiTE Campaign and a longtime associate of Sonke. He is widely published and consults to many international agencies including the Brazilian government on gender, violence and masculinities.

Note: The Helen Joseph Memorial Lecture is hosted annually by the University of Johannesburg in honour of the trade unionist and women’s rights activists Helen Joseph. She was a founder of the Federation of South African Women. On the 9th of August 1956, she and fellow activists Lilian Ngoyi, Rahima Moosa and Sophie de Bruyn, spearheaded a march of about 20,000 women to Pretoria’s Union Buildings to protest against the pass laws. The 9th of August has since then been commemorated as Women’s Day.