In March 2010, the Equality Court found Julius Malema guilty of hate speech and discrimination in a case brought by Sonke and ordered Mr Malema to apologise for statements he had made regarding Jacob Zuma’s rape accuser (and rape survivors in general) and pay a R50,000 fine within one month of the verdict. In June 2011, 15 months after the Equality Court issued its verdict, Malema issued an apology and committed to paying the R50,000.

Sonke welcomes Malema’s public apology but notes with concern the amount of time that has lapsed since the Equality Court ruling. Malema’s refusal to abide by the precise terms of the ruling represent disregard for the rule of law and creates the impression that he believes he is above the law. We also note with concern the ANC’s failure to discipline Malema or to require that he comply with the Equality Court ruling.

Proving that leaders can be held accountable

Sonke believes the successful, if late, resolution of this case proves that South African leaders can be held accountable for their public statements, and sees this is a positive sign for our democracy. It also reinforces the critical role that civil society can play in protecting human rights.

“We are glad that he has finally decided to abide by the court’s ruling in this matter,” says Desmond Lesejane, Sonke’s Deputy Director. “We urge him to comply fully with the ruling and show a consistent respect for the country’s constitution and the rights embedded within it. We are especially pleased that this case has brought men and boys out in public support of women’s rights,” says Lesejane.

The importance of gender transformation 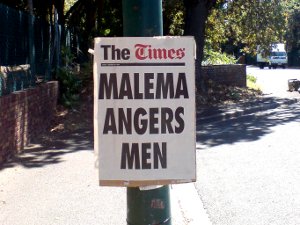 Sisonke Msimang, Sonke’s Board Chair said, “For many years, protection of women’s rights and promotion of gender equality has largely fallen to women. But gender transformation requires involvement across the board and we need to encourage more men and boys around the country to stand up against gender-based violence and challenge gender stereotypes.”

“This Equality Court case should be regarded as a clear victory for justice and women’s rights in South Africa,” says Mbuyiselo Botha, Sonke’s Government and Media Liaison. “South Africa has progressive legislation and policy aimed at protection women’s rights, including the Sexual Offences Act, but there are grave concerns that this legislation is not properly implemented and that in reality South Africans don’t receive the protection accorded to them by law.”

Despite its importance, this is a small victory. While a growing number of men and boys recognise that domestic and sexual violence are a threat to our democracy and a fundamental violation of human rights, too many men in South Africa continue to resist gender equality and women’s rights, and men’s violence against women continues to be an everyday occurrence in South Africa.

We achieved this together

Sonke would like to thank all the organisations and individuals that have supported this case. A number of local and international civil society organisations working towards gender equality and protection of human rights have backed this action over the last two years. We would specifically like to thank Chris Todd and his associates at Bowman Gilfillan who provided pro bono legal representation, and Lisa Vetten at the Tshwaranang Legal Advice Centre who appeared as an expert witness in this matter.

Sonke Gender Justice works with men and boys on issues of gender transformation, gender-based violence and HIV. We work across Africa strengthening government, civil society and citizen capacity to support men and boys to take action to promote gender equality, prevent domestic and sexual violence and reduce the spread and impact of HIV and AIDS. This case is the result of action that Sonke took in March 2009, in response to statements ANC Youth League President Julius Malema made to Cape Peninsula University of Technology students on January 22, 2009. He said of women making accusations of rape that “when a woman didn’t enjoy it, she leaves early in the morning. Those who had a nice time will wait until the sun comes out, request breakfast and ask for taxi money.”

Sonke argued that these statements amounted to hate speech, sexual harassment and discrimination. On 15 March 2010, the Equality Court found Malema guilty of Hate Speech and Discrimination and ordered him to issue a public apology and pay R50,000 to a women’s rights organisation.