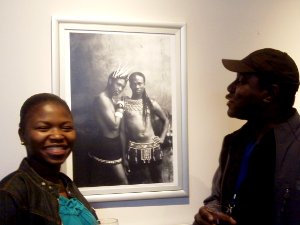 August is Women’s Month and as usual Sonke has been involved in a number of events supporting and celebrating this occasion. In the first week of August, we participated in the Artscape Women’s Festival, an annual event hosted at the Artscape Theatre in Cape Town. We were invited to host three events at the festival, including the important Men’s Forum. Overall, the festival explored the theme “Love Responsibly” and workshops, activities and entertainment focused on this broad topic.

On Friday the 6th, Micheline Muzaneza from the Refugee Health and Rights team, ran a workshop entitled “Sisters Unite” with a surprising large group of 143 women. The workshop aimed to show how women experience the same challenges regardless of the countries they are from, and encourage women of different nationalities to support each other.

Women from the Bonne Esperance shelter performed a series of skits highlighting issues that refugee and migrant women face, including cheating husbands, domestic violence, discrimination by potential employers and sexual harassment.Through activities and song, Micheline created awareness and agreement within the workshop group that these issues are universally experienced by women, and that women need to stand up for one another.

On Saturday morning, we hosted the Men’s Forum; an opportunity for men and women to discuss the role that men can, should and do play in promoting gender equality, and responsible, loving, equal relationships. The panel consisted of a number of knowledgeable men who are involved in gender or HIV work. Sonke was represented by Tapiwa Manyati who did an excellent job of promoting the importance of working with men and boys and encouraging men to communicate openly and honestly with their partners. He was joined by panelists Raoul Swart (Positive Muslims), Brian Kanyemba (Desmond Tutu Foundation) and Tebogo Nkoana (GenderDynamix). Raoul brought in the important Muslim perspective and spoke passionately about the fact that Islam should not be interpreted in a way that renders women subservient and vulnerable. He spoke about the importance of respecting all people, and called on the audience to think in terms of humanity rather than gender.

Brian spoke eloquently about love and trust in relationships, and about the need to continue to use condoms consistently and correctly. He was challenged by a young member of the audience who felt that condoms in South Africa should be banned, as they encourage young people to have sex indiscriminately. Brian was able to gently and rationally argue why this approach is unlikely to work, and was supported in this view by the majority of the audience. Tebogo forced the audience to really consider what it means to be man by revealing that he was born female but now lives as a man. He was challenged by members of the audience who felt that a black man who has not undergone circumcision cannot be a man. This sparked a lively (and rather heated) discussion about how one defines a man and whether it is even necessary to do so. Needless to say, no conclusions were reached. The discussion varied from some relatively sophisticated points to some very basic issues. Although some of the views expressed by the audience were particularly conservative or traditional, it was clear that people are interested in discussing these topics, and that men (young and old) are willing to attend these kinds of events and get involved in the debates.

This is My Story…

The final workshop of the festival was the “This is my story…” workshop which was co-hosted by Sonke, WHEAT Women’s Fund and GenderDynamix. Participants were given the opportunity to watch digital stories produced by the three organisations highlighting different issues and concerns, but all demonstrating gender discrimination in one form or another. Tapiwa was joined by volunteer Lucy Harding to facilitate Sonke’s part of the event. He screened two stories demonstrating how men engage with issues of gender identity and can change their attitudes and behaviours, and then led a discussion around these issues. The audience were very appreciative of the personal stories told, and showed a keen interest in learning more about how gender identity is constructed. They showed a particular interest in the work of Sonke and asked many questions about the way that Sonke works.

The film crew from the youth talk show Sistahood attended many parts of the festival and inter alia interviewed Micheline for the show. The show will be aired on 30th Aug at 15:30 and 4th Sept at 09:30 on ETV.