Brother, I do not want to bury you. Get treated

Leo Mbobi tells of his struggle to get his ill brother treated for HIV.

He would finally catch me and drag me with my only uniform my mother bought me with the little money she earned on the farm where she was working. My t-shirt would be torn apart and he pulled me and punched my little stomach as if he was punching a punch bag. He would even say, “I want to punch you here so that no one could see that I punished you.”

I was a fast runner… 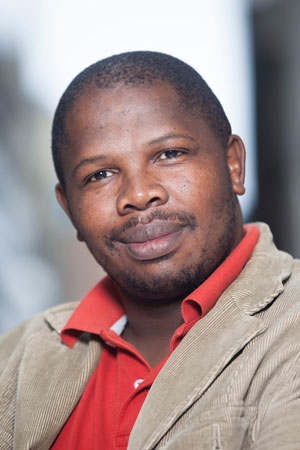 The school that I was supposed to go to started at seven in the morning. I was a good runner. I could dodge like a rugby player. I was inspired by the fact that he would not catch me soon. It would often take hours for him to catch me, but when he finally did I knew I would be punched like a punch bag. He was not afraid to drag me to school sometimes. When we approached the school gate, the bellboy would be ringing the bell to indicate that the sessions of the day are already done.

He was the hero to my school’s headmistress. They would praise him for his hard work in catching me and dragging me to school. Sadly enough, none of my teachers would question him as he would often not go to school himself for all the chasing me he was doing. He was in the same school doing grade 10. The teachers would praise him for the hard work he had done and encouraged him before they beat me on my buttocks – ten lashes with a cane for not attending school.

He is regarded by my family as one of the very stubborn and arrogant men of our generation. He is now is in his early 40s but I am unable to help him. If he had not forced me to go to school I may never have matriculated or gone on to study and earn my BA at the University of the Western Cape. He has been sick for a numbers of months. Truthfully for many years.

Recently my aunt took him in so that she can provide the caring role she always does when one of the members of the family is not well. My brother is known by all of us for being stubborn. He could not take the advice and guidance of my aunt. Instead, he continuously refused to go to the health facility to honour his appointments. He would even mislead heath workers when they asked questions about his health. One doctor asked, “Did you finish your TB treatment?”

His response was not surprising to us, “I never had TB.”

The angry doctor interrupted then said, “I could see here in my computer system that you were admitted at Karl Bremer and you are suffering from TB. Did you finish it?”

My brother was angry and refused to answer any questions.

Now he is about to die at any time. His CD4 cell count was 49 a couple of weeks ago. I allowed myself to get excited when he finally disclosed his HIV-positive status to me. I grabbed the opportunity and explained to him what is happening to his body. I even jumped to my room and grabbed flip chart papers and prestik to do treatment literacy on the wall of my shack, explaining to him how privileged he is to have a family member who can educate him on HIV treatment literacy. Medical staff in public health facilities do not have the time to educate individual clients about treatment because of the queue at their doorstep.

Recently he was discharged because he refused to allow the doctors to take his blood sample and urine to test the progress of his health. I understand he is an abusive and stubborn patient. Recently he was at my sister’s place waiting for his death. He does not want treatment. He wants nothing.

Throughout these days I’ve often thought maybe I owe him a big favour for his contribution to my life. He may have chased and beaten me on those dusty Eastern Cape streets, but without him maybe I would never have gone to university, never have become a gender and AIDS activist, never acquired the skills to do treatment literacy on flipchart papers on the wall of my home in Khayelitsha. It may be that I do owe him a favour for that. But I hope I don’t have to repay that favour by burying him. He has just been readmitted to hospital with meningitis. My brother I do not know what you want. I wish I could know why are you doing this?

Thank you, my brother. I love you.

Only weeks after this article was written, Leo’s brother passed on due to AIDS-related illness. His contribution to Leo’s life will live on.