It was two years ago when the late Dr. Molefi Sefularo, then Deputy Minister of Health, launched the Brothers For Life Campaign in front of 10 000 people in KwaMashu, Durban. Dr. Sefularo challenged this initiative to address issues that go beyond individual behaviour and seek to address social norms, policies, culture and to build supportive environments. 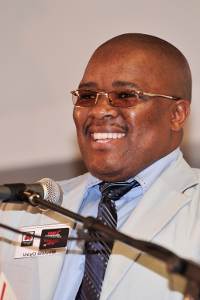 The campaign was established as a multi sectoral initiative driven by the partners in SANAC Men’s sector and supported by mainly by USAID/PEPFAR. Over the past two years more than 100 organisations have participated in the implementation of Brothers For Life and the number is still growing.

Since its inception Brothers For Life has reached over 30 million people through mass media and 400 000 people through interpersonal communication with messages that promote and entrench positive male norms on behaviour and health. The campaign is supported by the Deputy President of South Africa and the Minister of Health, and over the past two years has received strong support from a number of positive role models in the country and internationally.

“I will not forget the first time I saw the ‘new man’ advertisement on television in 2009, I thought to myself at last an initiative that seeks to engage men positively by appreciating the fact that there are good men out there,” says Mbulelo Dyasi, who hails from the Eastern Cape. “As men of the Eastern Cape, for the first time we had tangible messages and content that we could use to engage men in our communities and as a sector we could not pass up this opportunity.”

Captain Jeffrey Nkosi of the Mpumalanga SAPS Provincial head office works with men (and women) on a daily basis, and shares his opinion on the campaign. “Brothers For Life has really helped us as Men for Change, a men’s structure within the South African Police Service to empower and influence other men, especially with the number of challenges that face police men and women in the performance of their duties.”

The work done by Brothers For Life has not gone unnoticed nationally and internationally – the campaign was named Best Practice Model in the South African Minister of Health’s COUNTRY PROGRESS REPORT ON THE DECLARATION OF COMMITMENT ON HIV/AIDS 2010, nominated for two Loerie awards (South African Advertising Awards) winning two silver awards, for campaign identity and for public relations activation.

Internationally, the campaign has now expanded to Zimbabwe, Tanzania and Zambia through a partnership with UNICEF.

The two years could not have been a success without BFL’s many partners, in particular those in communities with limited resources. Despite this limitation, these partners have enabled BFL to reach hundreds of thousands of men on the ground. “These foot soldiers are the heroes of the campaign,” says Mandla Ndlovu, Programme Manager of the Brothers For Life Campaign. “We would also like to pay tribute to our ambassadors for making the campaign the success it is today. Men like Patrick Shai came out to tell their personal stories and in the process sacrificing a lot emotionally to bring messages to the fore. The likes of John Smit, Graeme Smith, Matthew Booth and Teko Modise gave more than just their names but also their time to support the campaign.”

Desmond Lesejane, Deputy Director at Sonke Gender Justice, says the campaign has done well to raise issues and responsibilities of men in the health of their families and to address the barriers that prevent gender transformation in households and communities. “However, we have only scratched the surface and the challenge in the next two years is to make sure that every single man is a brother for life ambassador not only in words but in action.”

Happy Birthday to Brothers For Life.