Sonke and the CGE Monitor are finalising a report on the CGE’s performance in the first 100 days of the new commissioners in office. The CGE is an independent institution set up by the state to strengthen constitutional supremacy and guard democracy in South Africa. The CGE is subject only to the Constitution and the rule of law. The goal of the CGE is to transform society by exposing gender discrimination in laws, policies and practices, by advocating for changes in sexist attitudes and by working to instil respect for women’s human rights. It has a specific focus on advancing the rights and interests of the most disadvantaged women who include rural women and women who are domestic workers.

CGE can play a key role

Considering South Africa’s history of segregation and its lack of observance of human rights including women’s human rights, the establishment of the CGE under the Constitution was crucial. The CGE can play a key role in facilitating gender transformation in our law, in politics and in society. An effective and successful CGE can improve the status of South African women through strategic and perpetual efforts to advance gender equality.

Despite 15 years of the CGE’s existence, gender inequality persists in various spheres of life including the home, the workplace and in communities broadly. Gender inequalities and the disempowerment of women are often in fact perpetuated through the lack of implementation of laws and policies and poor access to justice. Gender-based violence, which could be considered the worst form of gender inequality, manifests itself in the form of endemic sexual and domestic violence as well as violence perpetrated against gender non-conforming people. Such violence, based on people’s actual or perceived gender identity or sexual orientation persists around the country and poses a lived threat to many women’s and Lesbian, Gay, Bisexual, Transgender and Intersex people’s safety on a daily basis.

Gender and human rights organisations are concerned about the ineffectiveness of the CGE, based on the CGE’s legacy of limited and uneven delivery on its mandate. These concerns have led to the initiation of the CGE Monitor. 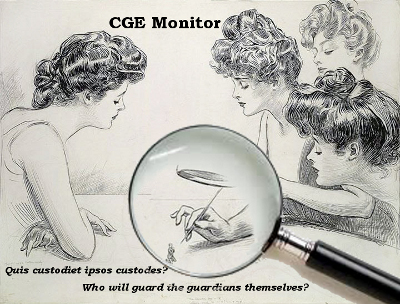 The CGE Monitor initiative is a working group comprised of women’s rights, gender equality and human rights organisations from across the country, and was established in March 2012 with the overall objective of promoting the effective functioning of the CGE. Sonke and the Women’s Legal Centre serve as co-coordinators of the initiative. The CGE Monitor keeps track of the CGE’s performance and will hold it accountable when it fails to deliver on its mandate.

The CGE Monitor’s first campaign was the 100 Days Monitor, in which it followed the movements of the CGE in the first 100 days of office of its new commissioners, and monitored its performance. The 100 days are over and the report is still to be written.

At the beginning of this campaign, the CGE Monitor met with a number of new CGE commissioners to inform them of the project, explaining what activities we plan to roll out to monitor the Commission, and presenting a list of long-term and short-term expectations that the working group believes the CGE should prioritise to better deliver on its mandate.

During the 100 days, the Monitor has put pressure on the CGE to attend and present a submission at the hearings on the Traditional Courts Bill. The CGE was not present at any of the public Parliamentary hearings on the first three of four days. After pressure from the CGE Monitor, the CGE presented the last submission on the last day of the hearings. The Traditional Courts Bill poses the threat of severely compromising rural women’s human rights, and is something that should be a key concern to the CGE. In its submission, the CGE raised a few good points in opposing the Bill particularly in regard to Lesbian, Gay, Bisexual, Transgender and Intersex (LGBTI) rights and in relation to the unconstitutionality of the Bill but omitted to deal with the gender implications of the Bill for women in detail.

The CGE Monitor has also been monitoring media coverage of the CGE to assess what activities the CGE has rolled out and supported, and to see if it complies with its strategic plan objectives.

The 100 Days campaign report will be published mid-December.