It was on the 18th of July 2012 and I was hosting the radio show that I present every Wednesday from 10 to 12 in the morning. The topic that day was re-integration of prisoners in their families and communities. I started as usual by introducing myself and the day’s topic: “How do we treat people coming from prison? Do you think we are fair or unfair? What do we expect from them?”

“I will never forgive him” 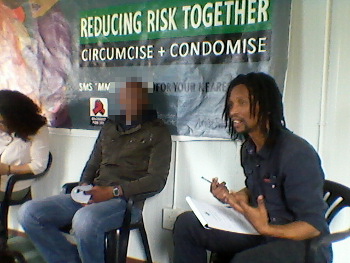 The first caller was a lady who said just a few words, “He raped my child and I will never forgive him for that,” and then she dropped the phone. I had to emphasise that I do understand that many people have been victims of crime and have been abused physically, sexually, emotionally, etc. But my emphasis in the program was to look at how we can create peace in communities and families.

Three callers out of 18 were sharing their own experiences as ex-offenders and saying that they can’t understand why the community does not want to accept them, as they have finished their sentences and they regret what they have done to their victims. Most callers said that there is a need for people not to condemn those coming from prison. If we do, that’s what makes them choose to commit acts that will make them go back to prison.

One caller said, “This topic is so painful. I’ve been in the same situation, thinking that I will never forgive someone else but I believe that affected me. I wasn’t happy. I became the kind of person that I don’t want to be and that was dangerous for me. I found help and I think differently now, compared with before.”

I learned from the discussion that most people want to create peace with people when they come out of prison. But they must be given time and the victims need to get counselling on an ongoing basis so that they can be more tolerant of others.

I also realize that South Africans are traumatized and there is a lot that needs to be done for this country so that people can be able to reconcile with themselves. Peace and reconciliation need to go national, from the schools to all the communities.

I feel that sometimes it’s not that people don’t accept ex-inmates but rather that ex-inmates might be the victims of difficult circumstances that they still need to deal with. That is why I encourage people to go and look for help so that they find a space to talk about whatever is bothering them.