In June 2011, Sonke published the MenEngage Africa Network Regional Organisational Capacity Audit report. The audit contains findings that will inform future capacity building interventions across the MenEngage Africa Network to promote work with men and boys for gender equality throughout the continent. “This document provides an exciting roadmap to advance the collective work for gender equality in the African region,” states Dean Peacock, Executive Director for Sonke. 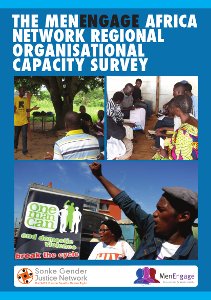 The MenEngage Africa Network is a coalition of NGOs and UN agencies that works to promote the engagement of men and boys in achieving gender equality, preventing HIV, promoting human rights, and reducing violence across the continent. The network promotes collaboration and resource sharing between organisations, supports joint advocacy initiatives, and builds capacity and leadership within its partners. Sonke serves as Co-Chair of the MenEngage Africa Network and the global MenEngage Alliance.

The questionnaire administered for the capacity audit is based on similar audits undertaken by MenEngage South Asia and MenEngage North America. The questions were adjusted to capture information specific to gender work in the African region, and contained questions on organisational demographics, strengths and weaknesses, training needed, knowledge on relevant laws and policies, interest in engaging policy makers and parliamentarians, and assistance organisations can provide to members of the MenEngage Africa Network. The questionnaire was distributed using an online survey, via email, and in hard copy. Sonke received a total of 69 responses from international organisations, non-governmental organisations (NGOs), community based organisations, donors and academics.

The survey responses indicate that organisations have clear programmatic strengths in behavioural change approaches, community-based interventions, and networking and coalition building. A majority of respondents indicate three primary areas of weakness: work with parliamentarians; law and policy reforms; and conducting qualitative and quantitative research. Organisations are split in their abilities regarding mass media campaigns, advocacy, and monitoring and evaluation of programmes.

Significantly, respondents are both keen to receive training in their identified areas of weakness and willing to assist in training others. A majority of respondents indicate that they view the MenEngage Africa Network as “very useful” and would like to collaborate with the Network. This is a clear endorsement for MenEngage Africa to continue to develop its role in supporting regional initiatives to promote gender equality through work with men and boys.

The report concludes with suggested next steps for the MenEngage Africa Network, which include to:

These activities will build the capacity of individual country networks, partners and the African regional alliance, and will add to the momentum for increased engagement of men and boys for gender equality.