The SANAC men’s sector is preparing a programme to mobilise a million men in South Africa to be actively involved in programmes aimed at stopping the spread of gender based violence, following the men’s dialogue in which 200 men participated, convened by Deputy President Motlanthe to address the spread of gender based violence in South Africa. The dialogue was attended by a cross section of men including the Minister of Health, Aaron Motsoaledi, Minister in the Presidency, Collins Chabane and Deputy Minister of Women, Children and People with Disabilities. 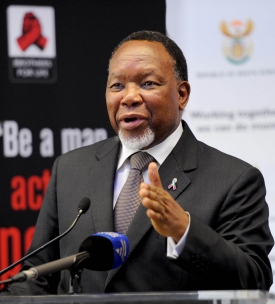 The dialogue, held in partnership with the Office of the Deputy President, South African National Aids Council (SANAC), Brothers For Life, BrandSA with support from USAID/PEPFAR, sought to mobilise men from all walks of life to play an active role in curbing gender based violence in their communities and in their areas of influence. It is part of the 2013 programme to mobilise millions of South African men to participate actively in programmes that seek to promote health as well as a violence free South Africa that will culminate in a national men’s march on the 9th August in Johannesburg. This programme will include the creation of violence-free zones in communities and dialogues on community solutions. “This programme aims to create a sustained response of work with men and boys as well as women in creating a violence-free culture in our communities, a response that will cultivate respect and equality” said the Chairperson of the sector, Reverend Bafana Khumalo.

Health Minster Motsoaledi called on the Men’s sector to support his call for the ban on alcohol advertising as it has a huge impact in driving violence in South Africa.

Brothers For Life ambassador, Patrick Shai called on government to consider forming support systems that can help both men and women in dealing with issues of difficulty around relationships, this idea was echoed by Motlanthe.

The dialogue culminated in the signing of the declaration which was led by deputy president Kgalema Motlanthe. The declaration is a commitment by men not only to be active players in the curbing of the spread of violence but also to challenge their own attitudes and beliefs that may spread violence.