No-one is above the law: Equality Court action against Julius Malema

“No one in this country is untouchable or above the law, and that includes you, Mr Malema”
— Mbuyiselo Botha

Recently, Sonke has stimulated immense media coverage around gender issues through its court action against Julius Malema, President of the ANC Youth League. 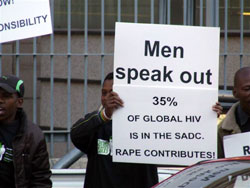 The complaint against Malema was lodged in early 2009 by Sonke staff member Mbuyiselo Botha after Malema made comments implying that the rape complainant against Jacob Zuma could not have been raped since she stayed for breakfast, indicating, Malema claimed, that she had enjoyed herself.

Human rights and gender equality organisations like Sonke are concerned with the impact Malema’s words will have on South African society, where rates of sexual violence by men against women are some of the highest in the world.

As an organisation that supports men and boys to take action to prevent domestic and sexual violence, Sonke feels it is important for Malema, a high profile leader, to be held accountable for his statements.

Malema appeared before the Johannesburg Equality Court in July 2009 on charges of hate speech, unfair discrimination and harassment of women. Sonke has asked the court to force Malema to make an unconditional public apology and pay R50,000 in damages to the NGO People Opposing Women Abuse.

While Mbuyiselo and expert witnesses from the Tshwaranang Legal Advocacy Centre to End Violence Against Women testified before the Court and withstood a battery of questions from Malema’s legal team, Sonke held demonstrations outside the Johannesburg and Cape Town High courts.

Shortly after the hearing, Malema publicly accused Sonke of being racist. “The black faces you see in front are not really black they represent whites who are opposed to black rule,” said Malema, glibly discounting the fact that many of Sonke’s staff and board members were prominent anti-apartheid activists, including Mbuyiselo himself. Malema also seems to have “overlooked” the fact that almost three-quarters of Sonke’s board of directors and two-thirds of the management team are black. 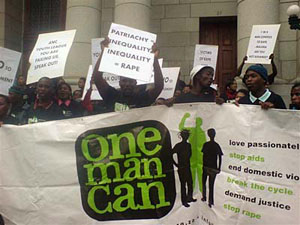 Despite Malema’s efforts to trivialise the matter, this case is a significant landmark for Sonke and for gender equality in South Africa. As co-director, Dean Peacock puts it, “Regardless of the outcome of this case, the publicity around it has made it clear that public officials can be held accountable for statements that demean rape survivors and pander to misogyny and toxic masculinities.”

Already, the previously quiet Equality Court in Johannesburg has seen an influx in complaints filed, and civil society organisations are talking more about their responsibility for holding leaders accountable for their statements.

Malema will return to the Equality Court on August 31. Join Sonke in our demonstrations outside the Johannesburg and Cape Town high courts.

>> read the study on the Equality Court case