On the 2nd of February 2015, exactly two years to the day after Anene Booysen was found brutally raped and disemboweled in Bredasdorp, a five-year old girl, Kayde Williams, was found dead in the same area, also after being raped and murdered. These two Bredasdorp murders, two years apart, signal a failure on the part of the South African government to follow through on its many commitments to ending rape and domestic violence, including abject failure to develop a national strategic plan (NSP) on gender-based violence (GBV). 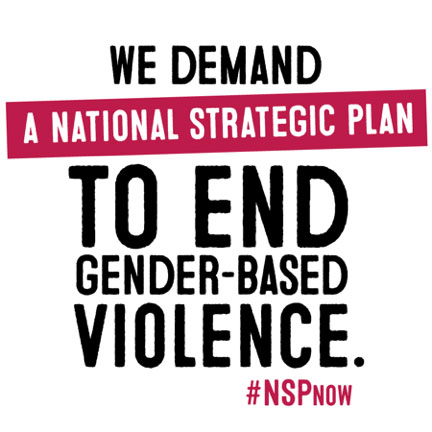 When Booysen was attacked, and graphic details of her murder hit the headlines and shocked the nation two years ago, President Zuma spoke of the need for unity in action to eradicate the “scourge” of GBV in South Africa. In his State of the Nation address then, Zuma urged the National Council on Gender Based Violence, which had been established the previous year2, to make combating violence against women an “everyday campaign.” But in the two years since, we have not seen a commitment to ending GBV in the daily words and actions of government. Instead, rape and domestic violence have continued unabated every day. Every single day, we hear horrific stories of women being raped, of gays, lesbians and transgender people being raped, of men being raped, of inmates being raped, of babies being raped. In the two years between the rape and murder of Anene, and the rape and murder of Kayde, incidences of GBV have occurred with numbing regularity all across the country, with tens to hundreds of thousands of lives devastated by rape3 and millions restricted by the ongoing, daily fear of it.

“Men, girls, boys and gender non-conforming persons are all falling prey to escalating levels of brutal sexual violence being perpetrated,” says Glynis Rhodes of the Western Cape Network on Violence Against Women, “The women in South Africa do not share in the ‘2013 Very Good Story that SA has to tell’ when they are not safe at home, at work and generally live in fear of rape and sexual assault.”

“We stand outside courthouses with placards and loudspeakers calling for justice in the cases of murders related to gender-based violence and calling for urgent government action and investment in prevention,” says Vuyiseka Dubula, Sonke Gender Justice’s Director for Advocacy and Accountability, “but the stories keep filling the headlines, every single day: Sandiswa (mother-of-two) who was killed by her partner; Queen, a nine-year old raped, set on fire and left to die; David, a gay man raped and murdered; Kayde; Anene… all the names could not be read during the time President Zuma starts and finishes his address tonight.”

Conservative estimates indicate that GBV costs South Africa as much as R40.2 billion4 each year. Despite the massive cost of this violence – more than 1% of South Africa’s GDP – our government has failed to act on its many commitments to ensure survivors have the health and criminal justice sector services they need and it has failed to put in place effective violence prevention strategies.

Now, as President Zuma is about to give his eighth State of the Nation Address, South African civil society1 renew our call on President Zuma to commit to developing a multisectoral, fully costed national strategic plan to address GBV. “Like last year, this year again we urge President Zuma and his cabinet to ensure meaningful follow-through to address and prevent gender-based violence,” says Anele Yawa, General Secretary of the Treatment Action Campaign, “Our members in TAC branches all over the country–women and men alike–demand that our government deliver on its constitutional obligations.”

Despite President Zuma’s directive two years ago, the National Council on Gender-Based Violence has failed to develop and implement a national strategic plan to address GBV, and has been suspended for over six months now pending “restructuring” of the new Women’s Ministry by incoming Minister Shabangu, a Minister, who when challenged by civil society, last year, showed evident commitment towards the retention of patriarchal dictates.

Minister Shabangu has failed to commit to implementing a comprehensive, costed and multisectoral national plan. And when challenged on this, she has only mentioned an outdated, non-costed, non-consultative, non-accountable, non-binding “365 Day National Action Plan” from 2006 which was never actually finalised nor implemented in the more than eight years since it was “drafted” and which is unlikely to see any real implementation now either. We reject 365 days of rhetoric, of empty talk about non-plans and old plans, and demand a real plan with a timeline, and with specific measures that will effect real change.

Government’s response to GBV to date has focused on response. Vital health and criminal justice system services are still sorely inadequate but even less attention has been paid to preventing the violence from occurring in the first place. Prevention strategies must be front and centre in the GBV national plan that we are calling on government to develop and implement. There are many examples of effective prevention initiatives: the Stepping Stones intervention implemented across the rural Eastern Cape significantly reduced levels of violence by men against women, as did the IMAGE project implemented and rigorously evaluated in rural Limpopo. Similarly, we know that providing psycho-social support to children exposed to violence in their homes decreases the likelihood that those children grow up to perpetrate or experience violence. Reducing access to alcohol and decreasing binge drinking also achieves this. In reality, we know what needs to be done to prevent South Africa’s frighteningly high rates of violence – what we’re missing is government’s commitment to do it.

Many countries have realised that the cost of inaction is too high and are implementing national plans to combat GBV. There is no excuse for South Africa to not be doing the same.

We call on President Zuma and government to show leadership, to invest in services for survivors and in violence prevention, to consult with civil society, to put money into ending gender-based violence and to urgently and comprehensively develop a multisectoral and costed national strategic plan to end gender-based violence in South Africa, and to do this now.

Without such a plan, South Africans won’t see service delivery, but will only be the victims of more lip service. We can’t afford another two years.