Sonke’s Refugee Health and Rights project is actively working with refugees and migrants in and around Johannesburg and Cape Town to provide information and support on HIV and gender. Although the project has a relatively small staff component and budget, the enthusiasm and community spirit of the peer educators and volunteers have helped to make this a very successful project.

2010 started off with the introduction of a number of new staff members to the project who have helped to get the year off to an impressive start: in February alone, a total of 597 people were reached and over 1800 male and 80 female condoms with pamphlets were distributed to refugees.

In Johannesburg, under the new leadership of Neo Mokhudu, work has included a campaign of open discussions covering a variety of topics such as HIV prevention and care, refugee rights, and gender and HIV. The campaign targeted selected Johannesburg suburbs where there are a considerable number of refugees and other non-nationals resident, including Yeoville, Berea and Bertrams.

In the Western Cape, Baku Kionga and his team have carried out a range of activities, including reintegration work in the De Doorns area following events in November last year, when Zimbabwean citizens residing in De Doorns were ordered by the community to leave the informal settlements. Although the initial government response addressed the immediate crisis, lasting solutions have not yet been realised and Sonke is working with various stakeholders and community members (including youth) to try and find solutions and bring the community back together. 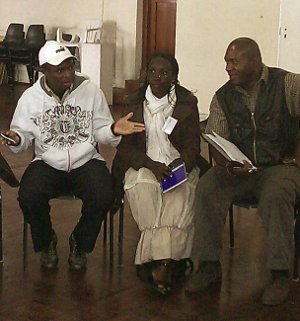 For example, Sonke has been working with the Scalabrini centre on the Social Soccer project to focus on long-term stability and reintegration among the different population groups in the De Doorns community. The purpose of this initiative is to challenge the attitudes of the local population to accept and integrate their foreign community members and achieve active participation of the foreigners in the community.

The project has also been conducting information campaigns at various Home Affairs offices to inform refugees of their rights and helping them to access services, including health and legal services.

Additionally, we have partnered with the Department of Health to recruit refugee children to participate in the mass immunisation campaign that is currently underway to immunise children against measles and polio.