Sonke Gender Justice (Sonke) celebrates the verdict of guilty for murder handed down by the Butterworth Magistrate Court in the Eastern Cape on September 11 against Nkosinam Xabadiya for the domestic violence murder of Sandiswa Mhlawuli.

Magistrate Doreen de Waal found Xabadiya guilty of murder just 9 months and one day after he killed Sandiswa Mhlawuli and after only five court appearances. In South Africa, it is extremely rare that cases are resolved this quickly. In fact, the majority of crimes reported, including murder, do not make it to court, and a very small percentage are completed within two years, if at all. Long trials reduce the chance of conviction and create additional trauma and expense for victims and their families.1

Sonke applauds the speedy resolution of this case but notes with concern that this occurred only because of the sustained pressure brought to bear on a negligent criminal justice system by local activists from Sonke community action teams (CATs) and from partner organisations. “While the speedy resolution is testimony to the power and potential of community mobilisation and people’s power, it should not be necessary for civil society organisations to spend large amounts of money and staff resources to ensure that the criminal justice system meets its constitutional obligations. This should happen as a matter of course,” says Sonke’s Executive Director, Dean Peacock.

Xabadiya stabbed Mhlawuli, his ex-girlfriend, to death in the Eastern Cape town of Dutywa on December 10, 2013 – International Human Rights Day and also the last day of South Africa’s 16 Days of Activism for No Violence Against Women and Children.

Xabadiya claimed that he and Mhlawuli were a happy couple intending to marry and argued that he did not mean to kill her. However, she had a paper in her handbag that told a very different story: the application for a protection order against Xabadiya, which Mhlawuli had obtained earlier that same day.

In the wake of Mhlawuli’s murder, Sonke was approached by members of one of our CATs, which we established last year while working in the Eastern Cape on the Safer South Africa project, a partnership with UNFPA and the Department of Social Development. Following their training on gender-based violence (GBV), the CAT members called on Sonke to support them in their efforts to demand justice for Sandiswa Mhlawuli.

Sonke took this case on as part of our ongoing work to build community capacity to address and respond to GBV. This work has three objectives: 1) strengthening community monitoring of the criminal justice system to ensure access to justice, 2) promoting community driven violence prevention to stop violence before it happens, and 3) generate local lessons for the development of a fully-costed comprehensive national strategic plan on GBV. Sonke is currently working on a number of similar cases across South Africa, including the homophobic hate crime/rape and murder of David Olyn in Ceres, the rape and murder of Queen, a 9-year old girl, in Delft, and the rape and murder of Dorcas Nqanqeli, a 14-year old girl, near Roma (Eastern Cape).

Sonke’s legal team quickly learned that neither the police nor the courts were treating Mhlawuli’s case as a priority and were not proceeding according to established criminal procedures. Amongst many failures on the part of the state, we learned that:

Sonke chose to monitor the case against Xabadiya because it became clear that without community pressure, there would be no justice for Mhlawuli or her family and that Xabadiya would remain free despite the overwhelming evidence of his guilt.

Sonke brought significant pressure to bear on this case. Together with dozens of CAT members and local partner organisations, Sonke supported the community in Mhlawuli’s village to take action. Together, we engaged village leaders, formed and trained community action teams (CATs) in an additional ten villages, monitored and picketed at each court appearance, put pressure on Legal Aid to prepare their defense properly, met with the police and the prosecutor, placed a complaint with the Commission for Gender Equality (CGE) who then engaged both the local and the district National Prosecuting Authority, and engaged local, regional and national media to increase pressure to ensure that the case was dealt with thoroughly and expeditiously and to keep GBV in the national spotlight.2

The Senior Public Prosecutor confirmed that due to the community pressure, Mhlawuli’s case was moved from the Willowvale District Court to the bigger regional Butterworth Magistrate Court, and that the community protesting outside the court and the memorandum,3 which was handed over, caused both the police and prosecution to give proper attention to Mhlawuli’s case.

Xabadiya no longer walks free. He is now in police custody, awaiting sentencing for the murder of Mhlawuli.

“The criminal justice system fails far too many victims of domestic and sexual violence in South Africa,” says Sonke’s Patrick Godana, “We believe the swift and successful conclusion of this case reflects the pressure that community members and ourselves brought to bear, and the close collaboration with key partners including the CGE, Treatment Action Campaign, Dutywa Women’s Support Centre and the Methodist Church in Dutywa. We thank all of our partners, the CATs, the village and community leaders, the eyewitness who remained clear and consistent despite harsh cross-examination and lack of preparation by the prosecution, and the many individuals who showed up at the court for every court appearance to call for justice for Sandiswa.”

More than a thousand women are killed by intimate partners in South Africa each year. All deserve justice. We call on our government to implement a fully funded national strategic plan on GBV, which includes serious improvements to policing, evidence-gathering and the courts, as well as commitment to prevention efforts. We have made this call again and again, but the government has repeatedly failed to respond with the appropriate commitment or urgency that is called for.

“We celebrate the ability of community members from Dutywa and its surrounding villages to demand and win justice for Sandiswa Mhlawuli and her family,” says Peacock, “We will continue to work to support community action and human rights activism across the country to ensure justice for victims of violence and their families, and to stop the violence.”

About Sonke: Sonke Gender Justice is a South African NGO working across all of South Africa’s nine provinces and in nearly twenty countries across Africa to strengthen government, civil society and citizen capacity to promote gender equality, prevent domestic and sexual violence, and reduce the spread and impact of HIV and AIDS.

The document also highlighted that only 19% of the crimes reported were completed within 2 years, and that where cases are delayed for more than 2 years there is less likely to be a conviction.

[2] Together with our CAT members, we carried out local education and training on GBV prevention, including engaging religious and traditional leaders to challenge harmful gender norms and other social norms that inhibit community action on GBV, and we also provided training on the importance of positive parenting as a way to interrupt intergenerational cycles of violence. We also helped Mhlawuli’s mother to access foster care grants to take care of Mhlawuli’s two children.

Media may also print this statement as a news article by Sonke Gender Justice. 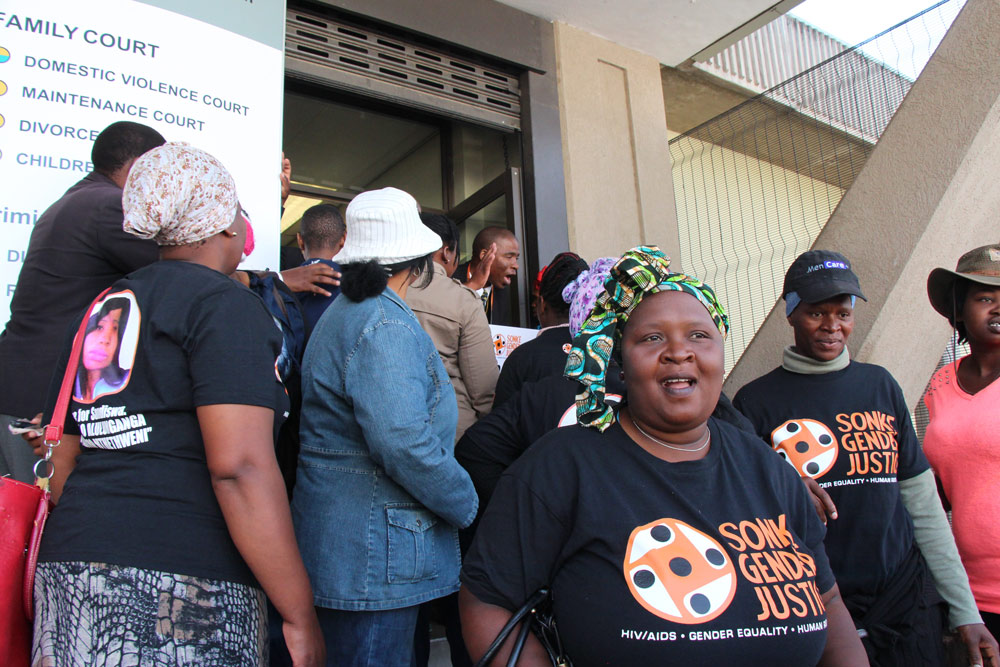 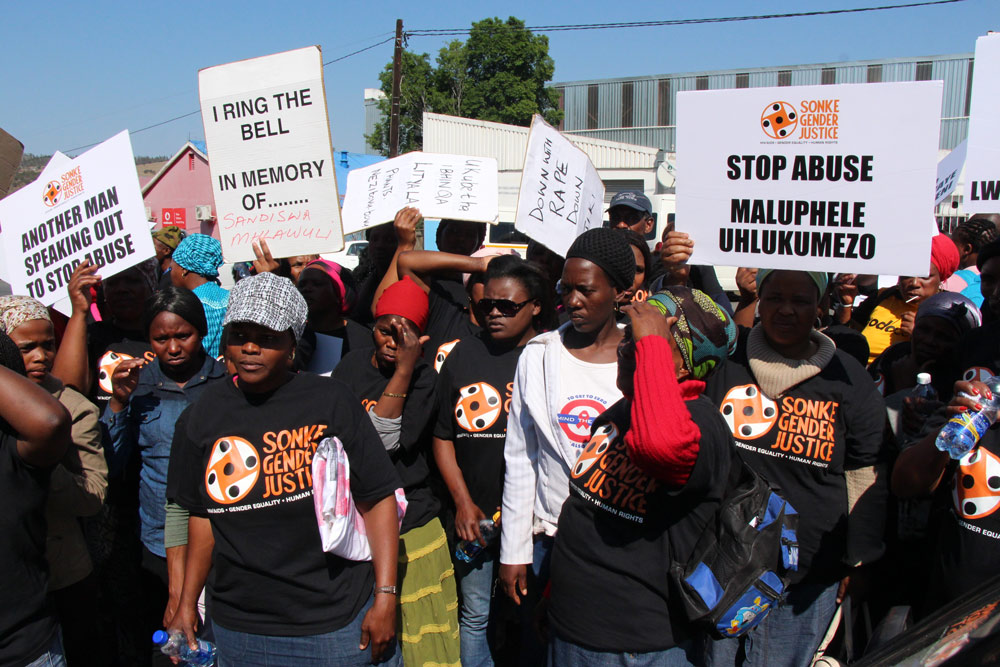