In March 2013, Sonke Gender Justice (Sonke) presented a report at the 57th Session of the United Nations Commission on the Status of Women (the CSW) on progress made by the South African government against national and global commitments it has made to educate and engage men and boys to prevent violence against women and girls (VAWG) during the period 2010 to 2012. The priority theme of the 57th session was the ‘elimination and prevention of all forms of violence against women and girls’.

The CSW is a functional commission of the UN Economic and Social Council. It is the primary worldwide policy-making body dedicated to gender equality and the advancement of women. Member states, including South Africa, gather at the UN Headquarters in New York annually to ‘evaluate progress on gender equality, identity challenges, set global standards and formulate concrete policies to promote gender equality and women’s empowerment’ globally. 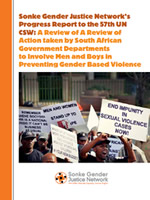 The findings of Sonke’s report revealed that government departments have made little progress in working with men and boys with only 3 out of 13 government departments scoring 4 out of 7 points and the majority scoring 2.5 or below. This being the case, despite government’s constitutional obligations to eliminate VAWG, and its national and international commitments to engage men and boys in efforts to do so, government departments have made little real progress in engaging men and boys to reduce VAWG. Overall, government departments in South Africa have, for the most part, failed to fulfil their existing policy obligations or honour the regional and international commitments it has made. This lack of implementation mirrors an alarming lack of implementation of laws and policies to ensure and protect the human rights of women and girls. It further undermines the very values of human dignity, equality and freedom which underpin our constitutional supremacy.

Sonke’s report recommends that in 2013 and beyond, government departments substantially increase action taken to transform men and boys to become more gender equitable with a view to preventing VAWG. Amongst others, government must implement policies and programmes to address the drivers of violence against women and girls by addressing norms of manhood that grant men the expectation of authority and dominance and a sense of entitlement to women’s bodies and an expectation of impunity when they violate women’s rights. Government must also implement laws that sanction and deter men’s VAWG.

Sonke calls on the government to set up a National Commission of Inquiry on gender based violence (GBV) to address the GBV epidemic to look into the reasons for the lack of implementation of laws and policies and its failure to scale up attempts to prevent, eliminate and respond to GBV. Additionally, Sonke calls on the government to take steps to ensure that civil society organisations providing services to survivors of GBV are given the necessary funding to increase such services which have been suffering under the current funding crisis.

The South African government was represented by several Ministers, government officials and civil society organisations at the CSW. We were pleased that the government upheld human rights principles during the negotiations leading to the agreed conclusions and congratulate them for their contribution towards the final agreed conclusions.

The agreed conclusions have a strong focus on increased attention and accelerated action for the prevention of and response to VAWG. Member states have also reaffirmed commitments to take concrete action to end VAWG and to protect and promote women’s fundamental human rights.

Whilst acknowledging the several positive outcomes on women’s sexual reproductive health and rights and other commitments to eradicate various manifestations of VAWG, from the increase of pornography on the internet to harmful cultural practices, the agreed conclusions failed to address sexual orientation and gender identity, sex workers rights against violence or intimate partner violence committed in relationships outside of formal marriages.