In collaboration with an international social media advocacy campaign, Sonke Gender Justice has launched a one-month-long initiative during Women’s Month documenting the lived experiences of womxn, girls and members of the LGBTQI+ community in South Africa.

The concept was inspired by the Instagram initiative @catcallsofnyc created by Sophie Sandberg which has garnered a following of 164,000 people.

Sonke’s version, in partnership with @catcallsofcapetown, includes incidents of gender-based violence and its intersections such as slut-shaming, victim-blaming, verbal and non-verbal micro-aggressions perpetuated against womxn, girls and members of the LGBTQI+ community.

The organisation does this through conversations with people affected. In this initiative, people are given the option to send messages detailing their experiences privately, while ensuring that the stories they share are posted anonymously. The ultimate aim is to offer an emotional release while opening avenues for discussion and awareness through collective experience.

The dialogues and private messages are creatively drawn in chalk near where the incident occurred. This expression is a commentary on the normalisation of sexual and gender-based violence in urban and rural spaces where womxn, girls and members of the LGBTQI+ community should feel safe and protected.

“Every womxn we approached had a story to tell. Many were not sure what constituted sexual harassment. The exercise provided a space for education as well. We explained that sexual harassment is behaviour characterised by unwelcome and inappropriate sexual remarks or physical advances. It is an action or speech that makes you feel uncomfortable. I cannot count how many times I have been sexually harassed on the street and approached aggressively by people who did not respect my agency. This initiative should create a conversation among those affected to build solidarity,” said Sonke’s Multimedia and Communications Specialist, Gadeeja Abbas.

One of the womxn who shared their stories with Sonke explained that she was 17 years old when she was propositioned by a friend’s father.

“I did not realise that he was making sexual remarks when he said: ‘Have you ever been kissed on your vertical lips?’”

It was only 10 years later that I looked back and realised that what he said to me was wrong. I remember feeling uneasy and stopped visiting my friend’s house.” 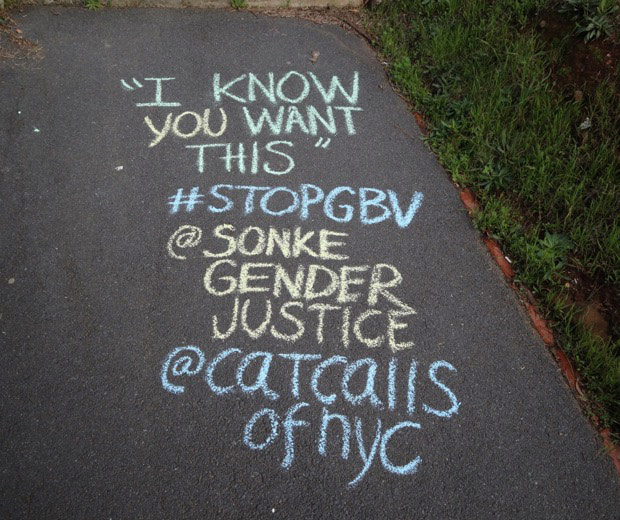 To join the conversation, follow @SonkeGenderJustice and @catcallsofcapetown on Instagram and Facebook. Direct message us your experiences and we will make sure that awareness is built around sexual harassment and gender-based violence.